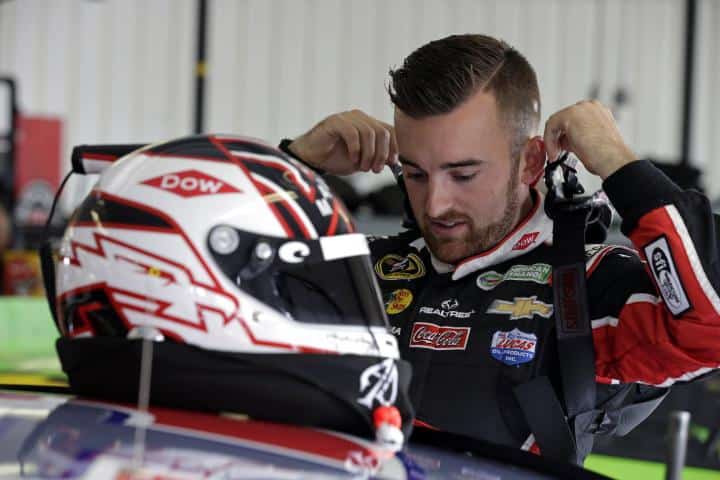 Ross Kenseth will make his series debut from the front row. Kenseth, son of 2003 NSCS champion Matt Kenseth, ended the final round tied with Elliott Sadler for second on the charts following a 30.585-second lap, only .002 seconds behind Dillon’s pole time.

Due to Joe Gibbs Racing’s No. 20 Toyota leading Roush Fenway Racing’s No. 11 Ford in owner points, Kenseth will start in second, with Sadler starting in third.

Regan Smith rattled off the fourth-quickest lap to lead JR Motorsports, with Brendan Gaughan rounding out the top five.

Fresh off a Camping World Truck Series win at Iowa Speedway, Erik Jones advanced to the final round before qualifying 11th. Dalton Armstrong put down the slowest lap in the round to earn the 12th starting position.

Brian Scott, Ryan Reed and Brennan Poole finished out the top 15 after failing to advance to the final round. JRM driver Ben Rhodes also failed to advance, qualifying 17th in the No. 88 Alpha Energy Solutions Chevrolet. Rhodes, 18, is making his second-career NXS start.

Ryan Blaney topped the first round with a lap time of 30.16 seconds, but failed to complete a lap in round two after colliding with the outside wall coming off turn 2. Blaney, who has two wins in 34 NXS starts, will start from the rear in his No. 22 Hertz Ford after going to a backup car.

The red flag fell twice during qualifications, both during the first round.

Making his first non-restrictor plate start since 2001, Bobby Gerhart spun his No. 0 Chevrolet to cause the first stoppage. The second red flag came minutes later, as Joey Gase lost control of his No. 52 coming out of turn 2 and made heavy contact with the backstretch wall.

Coverage for the Owens Coming Atticat 300 at Chicagoland Speedway will begin at 10:00 p.m. ET on FOX Sports 2.