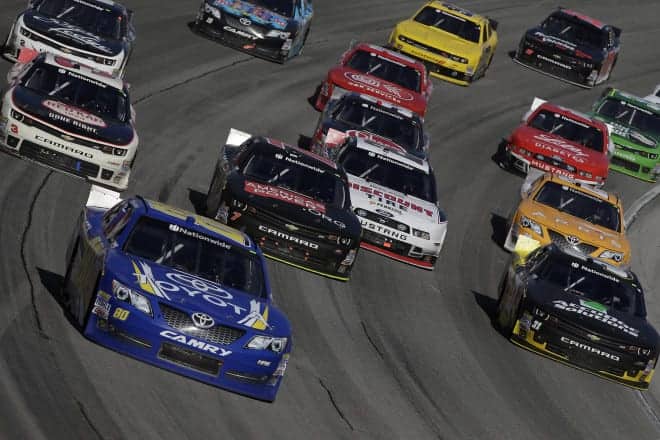 The NASCAR Xfinity Series was scheduled to hold their 14th race of the season Saturday night at Chicagoland Speedway. However, due to persistent thunderstorms and a dim forecast for the night, the Owens Corning Atticat 300 will be held on Sunday, June 21st. Coverage of the race will begin at 12:00 p.m. ET/11:00 a.m. CT on FOX Sports 2.

When the NXS race begins, 2013 series champion Austin Dillon will start the race from the pole. The pole is his fifth of the 2015 season. Sprint Cup regular Matt Kenseth will celebrate Father’s Day watching his son make his NASCAR national series debut in the Xfinity Series. Ross Kenseth qualified the No. 20 Dollar General Toyota for Joe Gibbs Racing in second place. Elliott Sadler qualified third, followed by Regan Smith in fourth and Brendan Gaughan in fifth. Defending race winner Chase Elliott will start the 300-mile, 200-lap event in sixth.

Ryan Blaney was fasted in round one of qualifying, but will start the race in a backup car after hitting the wall with his No. 22 Team Penske Ford in the second round.

I guess the rain scared away the 100,000…..oops, meant to say, 50 fans that would have attended this race had it been held Saturday night.

Did you mean to say 50 mothers and girlfriends!