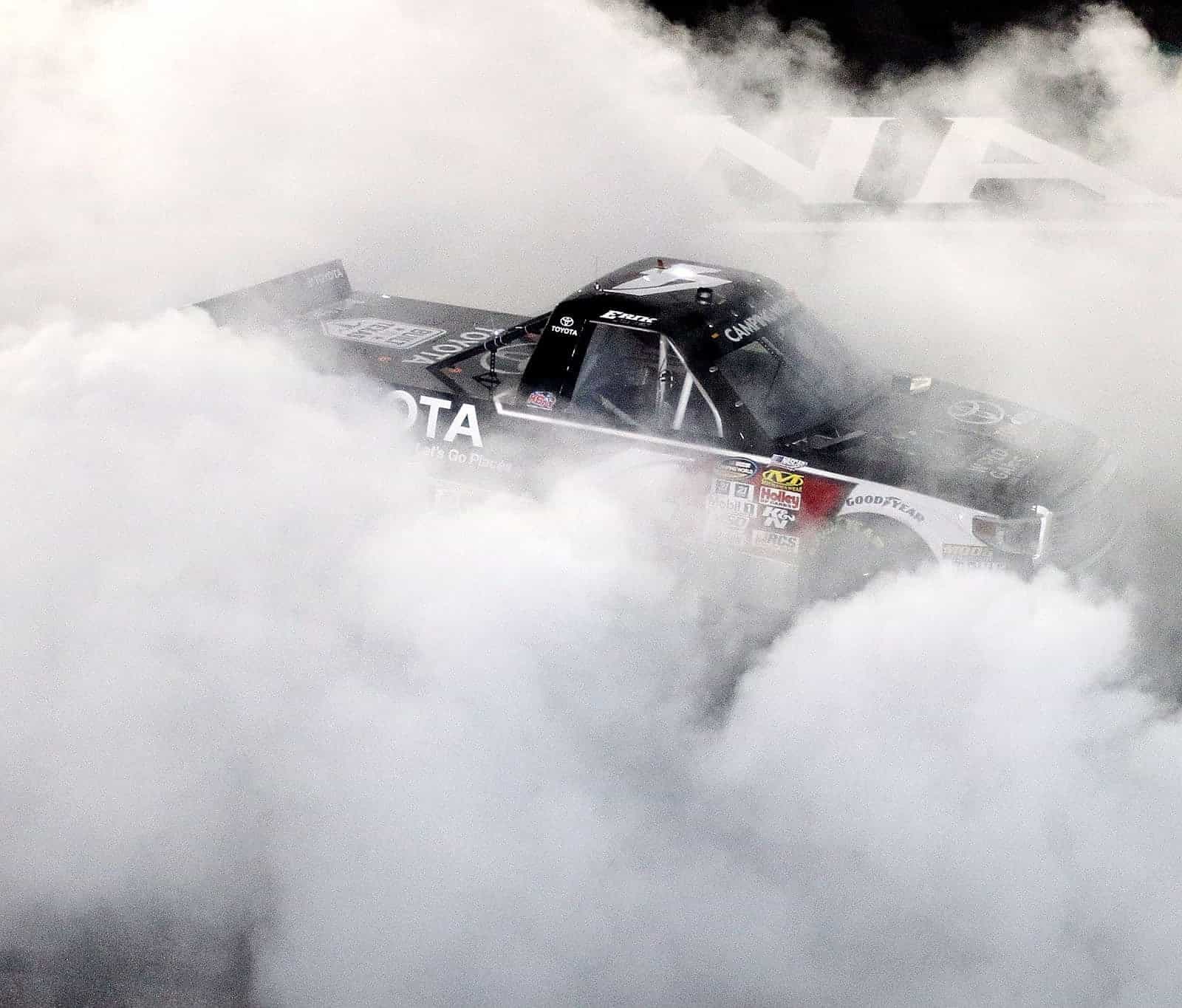 In a Nutshell: Erik Jones finally shook the monkey off of his back Friday night at Iowa Speedway when he grabbed a dominant victory. The driver of the No. 4 Toyota took the checkered flag nearly six seconds ahead of Brandon Jones, who led after a late round of pit stops. Tyler Reddick, Matt Crafton and debuting driver Christopher Bell rounded out the top five.

Who Should Have Won: Erik Jones has been the driver to beat for the last six races straight but hadn’t been able to get through a bout of bad luck. This time, though, the 19-year-old topped the only practice session, started on the pole and led a race-high 112 of 200 laps en route to Victory Lane.

Prior to Friday night’s American Ethanol 200, Erik Jones endured five races where he had the fastest truck that was clearly capable of winning, only to fall short for a variety of different reasons. From running out of fuel to mechanical failures to just getting beat, it seemed like Jones had endured it all in a short time.

But that all changed at Iowa Speedway. After topping practice and starting on the pole, Jones led 112 circuits, and as the laps wound down, Twitter was abuzz, wondering when it would all go south for the No. 4 team as it has so many times before. Instead, it was Jones who got the last laugh, all the way to Victory Lane.

“We’ve had fast trucks. Things just haven’t been happening. Just kept fighting and waited for it to come around,” Jones said. This one’s just enjoyment now. We’re back in the swing of things.

“I guess the last month was just stressful all around. Stressful on me as a person. I kind of came to realize it doesn’t come as easy as everybody thinks it does. I had a lot of success early on and definitely got into kind of a hard spot.”

While I’ve been quite critical about how Jones has handled his misfortunes in recent weeks, it was refreshing to see him looking almost humbled in his Victory Lane interview. Suddenly, instead of expecting to be the winner, Jones seemed to react as if he was grateful, and that’s certainly a step in the right direction. It still remains to be seen as to whether he can lose gracefully when bad luck comes his way, but as he progresses through his career, he’ll learn to handle himself better in the public eye, even if he’s screaming behind closed doors.

Now, Jones will head off to Chicagoland Speedway where he’ll pilot the No. 54 Toyota for Joe Gibbs Racing, looking for the weekend sweep just in time for Father’s Day.

Fast forward to Friday night and Bell definitely impressed behind the wheel of the No. 51 Toyota. After starting 10th, the 20-year-old dropped back as far as 17th but didn’t let that stop him. Through smart moves, patience and a strong truck, he picked off drivers one by one before settling into a fifth-place finish.

“I had a pretty good night – a remarkable night for me,” Bell said after climbing out of his truck when the checkered flag flew. “My only expectation coming in was just to make sure I finished the race. I just didn’t want to go out there and do anything stupid and get crashed or get tore up. So, really proud of all of my guys at KBM (Kyle Busch Motorsports). Can’t thank Toyota Certified Used Vehicles enough for the opportunity and looking forward to go race super late models with KBM.

“Obviously being in a KBM (Kyle Busch Motorsports) truck definitely puts on a lot of pressure to you because they’re expected to run good and they do have really nice trucks,” he continued. “The truck was probably a little bit better than the driver tonight and I think Erik [Jones] proved that. I’m just really thankful to be here and hopefully I’ll get some more opportunities.”

Bell clearly surpassed his own expectations in his debut… and mine as well. Any time a driver makes their first career start, it’s essential to run the race to completion in order to gain experience, mostly with the way the aerodynamics work with the truck. Bell did that and more, finishing in the top five and making some impressive, clean passes on drivers like Crafton and Reddick, among others.

Following a career-best finish of second last weekend at Gateway Motorsports Park, Spencer Gallagher brought home a seventh-place finish to score his first career back-to-back top-10 results in the Truck Series. But it didn’t come easy for the rookie, who spun on his own on lap 7 to bring out the first caution of the night. Able to avoid any contact, despite being right in front of Cole Custer when his truck went around, Gallagher dropped back as far as 26th and spent much of the race working his way through the field before the checkered flag flew.

Much like Gallagher, Ray Black Jr. suffered a solo-truck spin early in the race to bring out the second caution after starting 23rd. During a late-race round of green-flag pit stops, he rebounded to as high as 10th before settling in to a 15th-place finish.

Johnny Sauter, who struggled mightily in qualifying, picked up a new piece of hardware as the fourth and final caution flew over Iowa Speedway with less than 50 laps remaining. Following contact between John Hunter Nemechek and Caleb Holman, the bottom half of the nose from Nemechek’s No. 8 truck, slid down the track right into oncoming traffic. John Wes Townley clipped the bumper just enough to send it spinning right into Sauter’s path, where it clung to the front end of the No. 98 Toyota until his team removed it on pit road.

Post-race inspection cleared from the Camping World Truck Series garage with no issues. The No. 4 of Erik Jones, No. 33 of Brandon Jones and No. 19 of Reddick were taken back to the R&D Center. The trio finished 1-2-3 on Friday night.

Points Update: Crafton maintained his 12-point lead over Reddick following a fourth-place finish and 33 laps led. Race winner Erik Jones moved up to this this week after dropping to fourth last weekend. Sauter, who dropped a position with his 17th-place finish, and Townley round out the top five.

Rookie Gallagher moved up one spot on the strength of back-to-back top-10 finishes to sixth. Timothy Peters jumped two positions to seventh following two consecutive sixth-place results, and Hemric remains eighth. The biggest loser this week was Hayley, who led 37 laps before spinning to bring out the fourth caution, and dropped to ninth. Ben Kennedy rounds out the top 10.

“It’s been a long time coming and it sure feels good to get a win here at Iowa. This is kind of where we turned our season around last year and got our Tundra into victory lane. It’s just awesome man – Special Olympics World Games on the car is so cool. JGR (Joe Gibbs Racing) engines, Camping World and all the fans. But, what a day. What a day. Sat on the pole and won a race and led a ton of laps. That’s how you do it and it feels good to finally put it all in to get the win at the end of the day.” – Erik Jones

“They’ve (Erik Jones & No. 4 team) been on a rail all year. Definitely hat’s off to those guys. They’ve been really good. I think we’ve had speed all year long, honestly. It’s just starting to come around for us. I think we’re getting a lot of gains on the (Kyle Busch Motorsports) guys.” – Brandon Jones, finished second

“It wasn’t a bad run. Just really never got the balance that I felt like we needed to be fast. I mean we were fast, we definitely went from 16th to sixth so that was a plus for us. Pit stops were great, everybody worked hard strategy wise trying to get us to the front. Marcus (Richmond III, crew chief) made good calls all through the night. Just a little too free at the start of the run and it would go better there at the end so all in all it was a good night.” – Timothy Peters, finished sixth

Tweets From the Race

Huge thanks to everyone that makes these great nights possible @TeamBKR @roushyates @Team_Penske. What a tough motor they gave me tonight!??

All the @TeamNTS guys made big swings at it the whole race.Battled hard, never quit & got it close by the end! On to @KySpeedway#haveFAITH

Good job by everyone to run a solid race and come home with a top ten, we'll come back better, looking forward to Eldora in a few weeks!

Led 40 laps tonight with a truck my guys put there heart and soul into, I have a bunch of really great guys on my team and a win will come!

Up Next: After four straight weeks of racing, the Camping World Truck Series takes three weeks off before heading to Kentucky Speedway Thursday, July 9. Last year, Kyle Busch led a race-high 91 laps en route to a nearly two-second victory over Darrell Wallace Jr. Coverage for the UNOH 225 begins at 7:30 p.m. ET on FOX Sports 1; the race can also be heard on your local MRN affiliate.