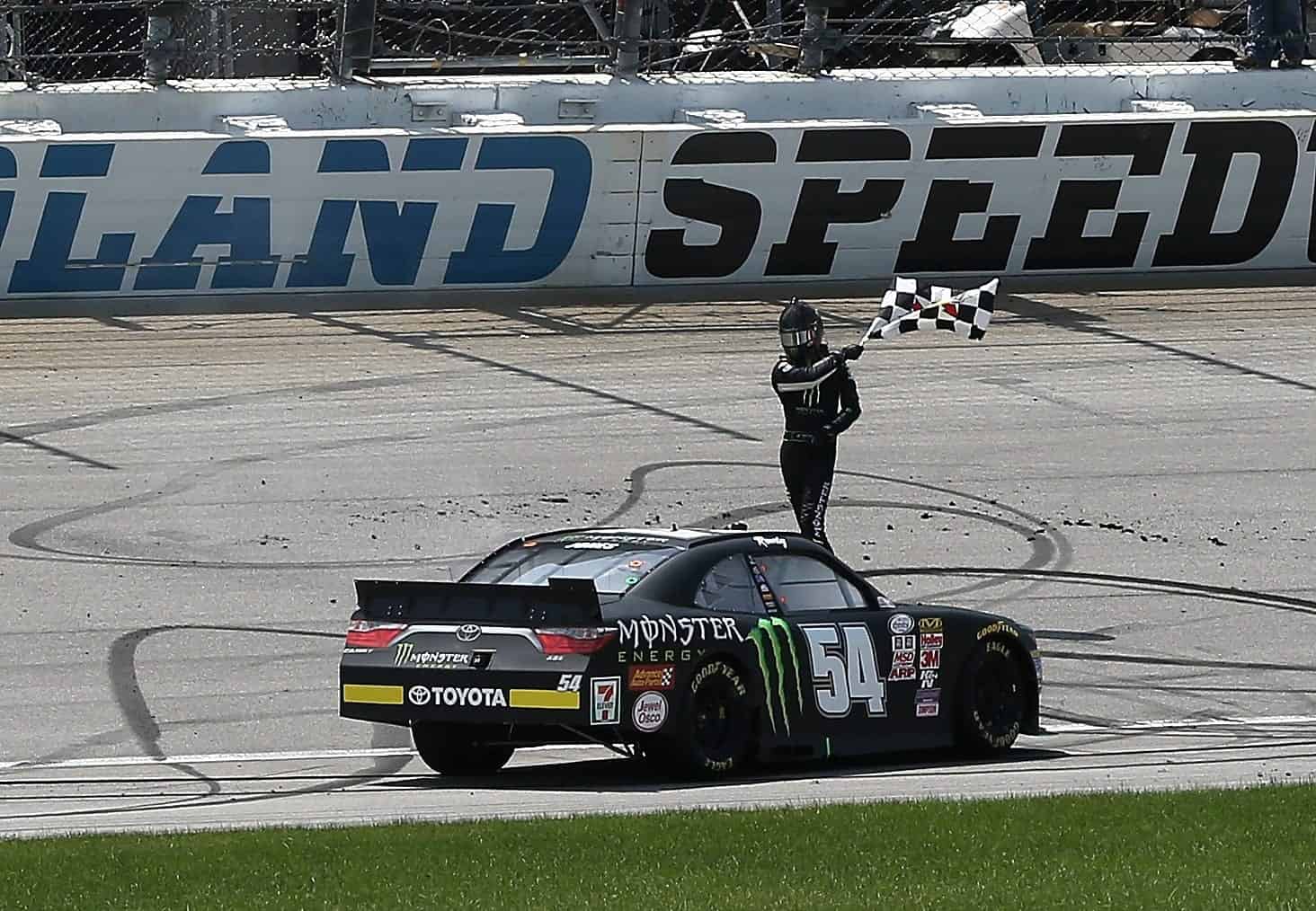 Break out the broom. Erik Jones won the NASCAR Xfinity Series Owens Corning AttiCat 300 at Chicagoland Speedway by a handy margin over Ryan Blaney. The Joe Gibbs Racing development driver, who won the Truck Series race at Iowa Speedway Friday night, took over the top spot with 10 laps to go in his No. 54 and only opened it up from there. Blaney held off a charging Austin Dillon for second, with Dillon, Brendan Gaughan and points leader Chris Buescher, who rebounded from an early pit-road penalty, rounding out the top five.

Ross Kenseth, making his Xfinity Series debut, finished sixth over Daniel Suarez in seventh. Brian Scott came home in eighth and Ty Dillon and Darrel Wallace Jr. completed the top 10 despite Wallace going for a spin in the early laps.

Dillon led the field to the green flag, but it was rookie Kenseth in his NXS debut who pulled ahead to lead the first lap. Dillon, however, had the advantage of the outside line and was able to take the lead an pull away in clean air. Dillon led until the caution flew at lap 25 for a scheduled competition caution after Saturday’s rains.

Several drivers showed speed early, including Jones, Suarez and Elliott Sadler, but it was Blaney who really showed his hand in the opening laps. Starting from the rear after going to a backup car following a crash in qualifying, Blaney was in fourth place by the time the competition caution slowed the field.

Dillon led the field off pit road, but Regan Smith got the jump on the restart, and Sadler and Jones squeezed by Dillon as well before Dillon could get up to speed. Back in the pack, the racing was fast and furious as several drivers jockeyed for position in the back of the top 10. Gaughan and Brennan Poole had minor contact but got away unscathed.

Jones drove past Smith to take the lead on lap 39 in the No. 54. Jones, who races for points in the Camping World Truck Series, missed Friday’s practices, relied on JGR test driver driver Drew Herring to set the car up, and Herring did a good job finding the feel that Jones liked.

The speedy Blaney took over the lead on lap 71, just in time for a round of green-flag pit stops a few laps later. Those stops were problematic for a few drivers, including points leader Buescher, who got a speeding penalty but had a stroke of luck when the caution flew for a loose tire. Suarez also had problems, nearly missing the commitment cone and entering pit road hot, then narrowly avoiding contact with Poole and missing his own pit in the process, forcing him to back up to get his service.

The caution allowed several drivers to take the wave-around to get back on the lead lap after the green-flag pit cycle was not completed before the yellow flew.

IT was back to green on lap 87. On the front row, both Jones and Blaney got a slow start, allowing Dillon and Smith to mix it up with Blaney for second as Jones was able to pull away from the field. Dillon got past Blaney but was unable to chase down Jones immediately.

The caution flew again at lap 97 for a turn 2 spin by Wallace, who suffered very minimal damage. The spin did allow Wallace’s teammate, Buescher, to get the free pass back onto the lead lap. The leaders hit pit road for service, with Gaughan getting off first after a two-tire gamble while most of the leaders took four fresh Goodyears. Smith came out of the pits in second and jumped to the lead on the restart while Jones and Blaney battled for third. The two-tire strategy gained Gaughan track position, but four won out at the front as Jones, Blaney, Austin Dillon and Ty Dillon all squeezed by in a few laps.

Buescher used the green-flag run after that caution to make a run through the field, racing from 20th into the top dozen.

Jones retook the lead with 87 laps to go. Blaney got past Smith as well, dropping the JR Motorsports veteran to third before the fourth caution of the day flew for Mike Harmon‘s car coming to a stop on the apron on lap 127 just as the race was getting a long green-flag look to it.

Blaney was the first driver off pit road over Jones and Dillon, but the caution didn’t fall at a very opportune time for teams as they were not yet in a window where they could race to the end on a tank of gas. The field returned to green with 67 laps to go.

Jones got the jump on Blaney at the green flag, leaving Blaney to battle with Smith and Gaughan for second. Gaughan got the spot only to take Austin Dillon through. Dillon went by Gaughan for the second spot while a huge battle took place behind the pair which shook out with Blaney running fourth and Ross Kenseth fifth.

Caution number five flew with 50 to go when Dylan Lupton tagged the wall in the No. 25 machine. The caution was a lucky break for Wallace, who had taken the wave-around and needed to pit for fuel. A wrench was thrown into the works as Gaughan, Blaney, Buescher, Wallace and Jeremy Clements stayed on track as the pit road open light showed red when they passed the commitment line. Other leaders, following team instructions on the radio, came down pit road only to be penalized by NASCAR for jumping the light. It was clearly NASCAR’s mistake, as the pit-road light operator missed the order to change the light and flag. In all, 22 teams got penalties due to NASCAR’s mistake. While it was the right call by the rules, as the light controls pit road, it did hurt some teams’ chances in the closing laps.

When NASCAR sorted the running order, Blaney and Gaughan restarted in first and second, with three-wide racing behind them as the pair fought for the lead. Wallace was in the mix as well after his earlier spin and consequent wavearound. Jones drove back to second, but the time it took him to get by everyone else allowed Blaney to open a gap of over a second on the field with fewer than 40 laps to go.

Just as Blaney began to stretch his lead, Chase Elliott spun coming off of turn 2 from 20th place, bringing out the sixth caution of the day. A few teams, including Kenseth’s had opted to save their last set of tires for a final run, and came to pit road to bolt them on. Kenseth exited the pits first among those drivers, restarting in 16th.

Blaney and Jones fought it out for the lead on the restart with 19 laps to go, while Gaughan slipped by Austin Dillon for third. In the pack, Kenseth got together with Ben Rhodes, but both got away clean. Several other drivers also came away with dents and tire donuts as they went three- and four-wide for positions all through the pack. Dakoda Armstrong, running 17th, wasn’t so lucky, spinning across the track for caution number seven after a scuffle for position with Ross Chastain.

All of the leaders stayed on track, setting up the restart with 12 laps to go. Blaney chose the bottom lane against Jones, and that proved to be the right decision as Blaney jumped in front of Jones, leaving Jones to battle with Gaughan for third.

But Jones wasn’t done. He charged back to Blaney’s bumper and then dove to the inside to retake the lead with ten laps remaining. Blaney’s car faded a little as Austin Dillon also squeezed past for second

Kenseth, meanwhile, used the last run to charge toward the front, racing his way into the top 10 and toward the top five. Kenseth was strong in his series debut, able to take advantage of the excellent equipment he was given for his opportunity.

If a race happened and no one saw it on TV and no one was in the stands, did the race really happen?
How ironic that the Xfinity Series race was on a channel that Xfinity doesn’t carry, from what I read today.
It’s a good thing the tracks don’t release attendance data anymore because anything over 150 would be fudging the numbers.
Out of all the brain-dead things NASCAR does, the scheduling of this race every year on the Cup off weekend is near the top of the charts. Granted, this series is vibrant compared to the Trucks but this is the prefect chance to put on a show at a smaller track where it would be treated as a decent-sized deal. You can fill in the blank with any number of tracks this series abandoned in the late 1990s or early 2000s. Chicagoland can barely support the Cup race at the start of the hallowed Chase.

Agreed. Those that still believe (hope) that everything is just fine should note that Fox chose to put this race on a channel no one gets rather than bump a women’s soccer game between two foreign countries. It is almost a given that Americans still view soccer as about as exciting as watching grass grow. So, It is not unreasonable to assume that Fox finds NASCAR even duller than that.

I saw “Rowdy” on the 54 car during a close-up of the car (imagine that). I think “Festus” would be more appropriate.

Busch won’t put “Erik Jones” on the car? Quite the ego.

If only the Xfinity series had the excitement of a “chase.”

i searched and searched for the race on tv….figured it was on foxsports2, which i don’t receive.

i did find it quite interesting while channel surfing and getting around the hallmark channel that an advertisement for nascar on nbc was playing. had to stop and look at the screen to see what channel was on!