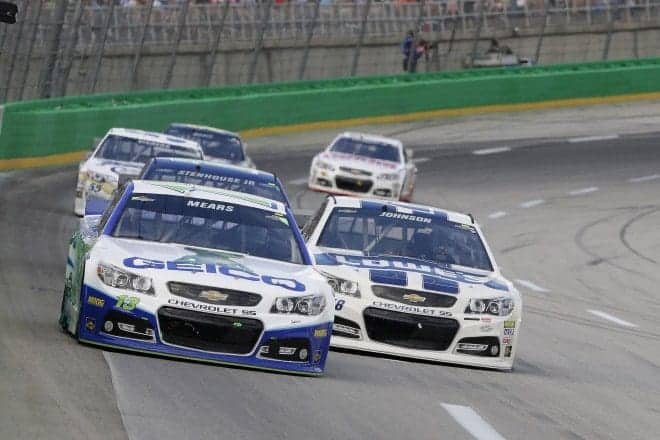 In response to a decline in passes for the lead under race conditions, paired with the handling of the current version of the Generation-6 Sprint Cup Series racecar, NASCAR took action last week. Steve O’Donnell, the sport’s Executive Vice President and Chief Racing Development Officer, announced a new racing package being debuted for upcoming action at Kentucky Speedway in early July.

So, is this latest move a good thing, a bad thing, or is NASCAR caving to a small but vocal fanbase that has taken to social media and blasted today’s racing as not being as exciting as it was in years past? The answers to these questions really don’t matter because fans are always to going to cheer and fans are always going to complain. It’s what fans do and it often falls along the lines of how well their particular driver is doing on the track.

What’s more important is that fans, overall, enjoy the product presented by NASCAR. It needs to be competitive and fair for everyone involved and provide an on-track excitement level unavailable in other sports or forms of auto racing. That has been the desire held by NASCAR since its inception in 1948 and carries through to today.

O’Donnell said NASCAR was aware of the concerns about lead changes but didn’t want to pull the trigger on a racing package if it wasn’t ready for the track. So, rather than rush things, the sanctioning body met with the newly-formed drivers’ council and hashed out the good, the bad and the ugly about what needs to be done to have better racing on the track. Although the new package is only being run in a one-off event, it will be the base of what is brought to the track in 2016.

“We’ve said it many times, and certainly want to reinforce it here, that we’re committed to putting the best racing on the track, and I’m certainly pleased that it’s been evident from really every conversation we’ve had with our industry that they feel the same way,” O’Donnell said, being careful to point out that NASCAR isn’t throwing the baby out with the bathwater, so to speak. “I just want to add, this is not an abandonment of any rules package. There’s many positives we’ve seen out of our current rules that shouldn’t be dismissed, but we’re constantly working on all areas of competition, and we’ll never consider the racing package final, because we’ve been vocal and will continue to be vocal about our commitment to continuing to improve the racing.”

What can be taken away from O’Donnell’s comments is regardless of what happens at Kentucky, this change isn’t the last we will see. Additionally, race fans may see additional racing packages depending on the track. For example, there are already differences between the rule packages for cars at superspeedways and short tracks.

The goal is to reduce downforce, which has made the cars too easy to handle, almost impossible to spin out and gives the leader a significant aero advantage over the rest of the field. There is also the goal of increasing the off-throttle time and throttle response, which should help the cars get off the corners faster. If that happens and drivers can slingshot around the leader, or even just overpower them out of the corners then it will be mission accomplished… for now.

NEFF: Why Reducing Downforce Is Important

The unknown variable is NASCAR has only run simulations with the new package and won’t know the true results until things play out in real-life conditions at Kentucky. This isn’t a test or the Sprint All-Star Race – where the package was originally to be unveiled – and requires having all the cars on the track, running the same package at the same time.

“You’ve got to have 43 drivers out there putting it all on the line for a race, and I’d say that for any race. I can’t simulate any one of our 36 races to the exact number of lead changes,” O’Donnell said. “We’ll see what happens when we go out there, but we certainly expect a great race.”

Obviously, that last statement is yet to be determined, but given the reaction of some fans to the racing already seen this year, anything might be an improvement – even if others think the action on-track has been pretty exciting. For now, it’s a game of wait and see.

If they got rid of the lawn mower (sorry, splitter) and made the front more boxy it might help. How does making the rear spoiler lower make it less aero-dynamic? Wouldn’t that decrease drag?

Maybe they should give them real race cars and tires not specific for Johnson.

Brian is driving a Hendrick Chev with four Goodyear racing tires chosen by Johnson and full of Sunoco race fuel on an icy road to a cliff.

You can generate downforce underneath the car as easy as over the car. Thats what the F1 guys do, and BTW they have aero push issues as well.

DoninAjax doesn’t know what they are talking about. Shortening the spoiler makes the car have less of an aero footprint which means they rely less on aerodynamics. Also he complains about the splitter which is being shortened. Then he goes on to claim the cars and tires are made for Jimmie Johnson – who has been one of the most vocal drivers of all about taking away downforce.

I want the splitter removed. It’s another band-aid fix. Johnson has never complained about the tires, has he? NA$CAR never capitulated, right?

If I remember correctly Johnson and Knaus did complain about tires. What I can’t remember is was it last year and was it Texas and another track that Goodyear took softer tires and Johnson wore them out resulting in failure. What I clearly do remember is when Johnson was being interviewed with the strands of shredded rubber in his hand crying the blues. Yep Johnson pretty much threw Goodyear under the bus.That was the last of soft tires.

Dan, you’re correct. Goodyear brought a softer tire which resulted in a couple of teams (Johnson and a couple others) having issues with tire management. Instead of teams being called out for their poor tire-management skills the broadcast booth (during race coverage) stated a few times that Goodyear had issues with the tires that they were supplying to NASCAR. Soon after, the next race or two (I’d guess after a talk with NASCAR) was back to bringing rock-hard tires to the tracks. The interesting thing I found was that the race was a bit more exciting as it put a lot more into the drivers hands as far as car control.

I don’t think that the changes for Kentucky will be a cure-all for all the aero issues that currently plague the races but I do think that NASCAR is taking a step in the right direction. What I hope doesn’t happen is that if the cars are loosened up that the drivers; who may be quite used to driving the slot-car type cars they are driving now, don’t complain to the point that NASCAR immediately reverts back to the IROC package they are currently using.

while they are at it, maybe they could open up the grills

It is painful to admit this but I may have reached that stage of old fartdom that I simply do not believe anything ever changes for the better until I see it.
PS: Did anyone see where I left my glasses?