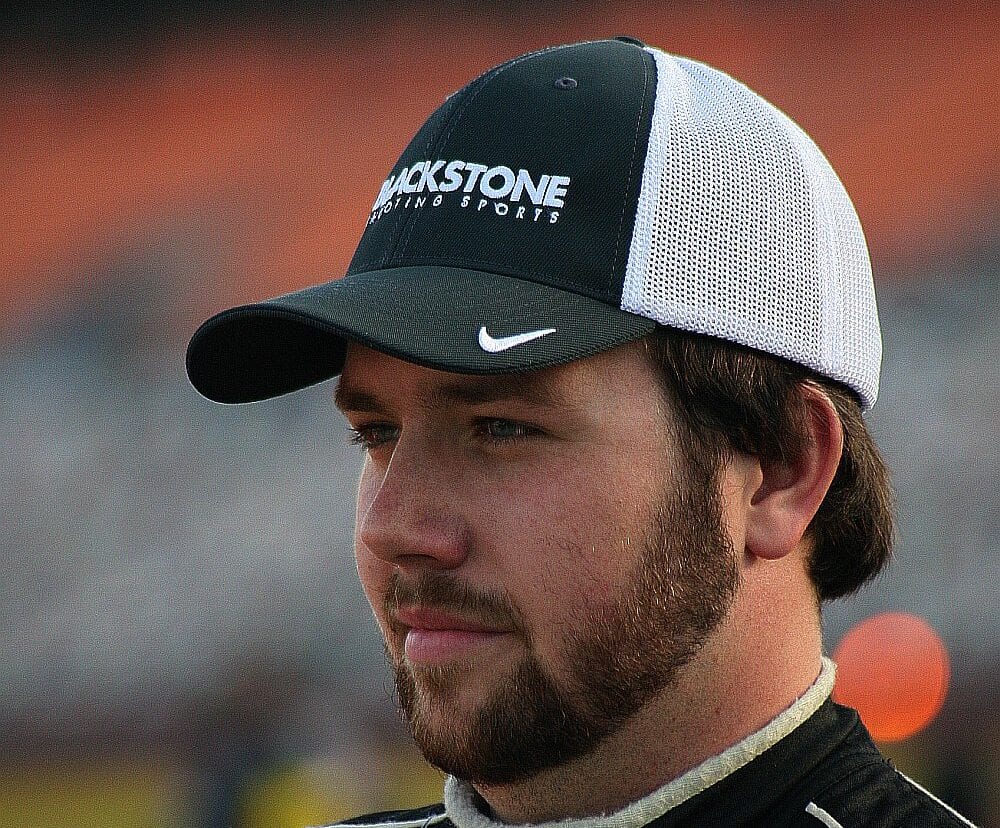 For up-and-coming racer Alex Kennedy, the learning curve has been steep; the 23-year-old from Aztec, New Mexico has never raced on most of the tracks the NASCAR Sprint Cup Series visits. Kennedy is learning them the hard way with the No. 33 for Circle Sport, where he drives on a partial Cup schedule. Kennedy also holds a nine-to-five job managing a software company and juggles being a college student into his already busy schedule, but he took some time to sit down with Amy Henderson at Charlotte Motor Speedway.

Amy Henderson, Frontstretch: Talk a little bit about your background in racing and how you came up through the ranks.

Alex Kennedy: I got my start road racing. My first start in the (then) Nationwide Series was at a road course. It worked out that the driver didn’t want to do the road course , so they put me in the car and I was able to show what I had there. Using the road courses helped me get in the door. Even here (at Circle Sport), they called me to come do Sonoma, and that kind of evolved into what we’re doing now, which is what I was shooting for the whole time. My background is kind of no different than really anyone else’s. I started doing road-course racing in Legends cars because it was the best bang for the buck. We didn’t have a lot of money to go and run a lot of races, so we focused on road courses. In a road-course event, you could get three or four hours of green-flag racing every weekend, where at a circle-track event, you get three to four hours in a whole season. We were just looking for the best bang for our buck, like I was saying, to get me as much experience as possible. I’m not uncomfortable on road courses, and that’s what sort of got me into that spot, but I grew up racing late models and everything on a circle track. I did a full season in the K&N Series and I actually did ARCA for two races before I got my NASCAR approvals and then jumped to the Nationwide Series, which is now the Xfinity Series. I got to run for Mike Hillman and those guys last year, and we’re trying to turn that into what we’re doing today and trying to get me experience on the circle tracks. I’m kind of labeled as a road-course ringer, but that’s because I got my start on a road course. I want to be able to do circle tracks and everything else. To be able to do that, I need to get the experience, and that’s what I’ve been doing.

Henderson: What has been the biggest adjustment for you coming into the Sprint Cup Series and racing on tracks you haven’t seen before?

Kennedy: The biggest adjustment is just learning the tracks as quickly as possible. This weekend is my first time being at Charlotte. I might have run the infield road course or the quarter-mile circle track in Legends cars. Before the Sprint Showdown, I’d never been on the big track. So, my biggest deal is learning as quick as possible so we’re not wasting practice getting me comfortable and we’re adjusting on the car. That’s our biggest goal now. Everywhere we’ve been except for Phoenix, I’ve never been to in a big car before. So it’s been a learning curve there, but I think we’re tackling it pretty good. We’ll have a lot better handle on it at the end of the season when we go back to some of these places.

Henderson: Your team works closely with the No. 40. Have you been able to lean on Landon Cassill a little?

Kennedy: Oh yeah, definitely. Landon has been able to tell me what he’s doing and what his car is doing. Our cars are usually around the same in setup, so we try and start off in the same area. Being able to bounce ideas off of him or figure out how he’s going into a corner, where he’s lifting and how he’s working the throttle has been huge for me. Everyone else in the Cup Series has been great to me. I was able to talk to Tony Stewart and all those guys who are around us and get ideas from them. They want to help you too. It’s been great with everybody in the garage.

Henderson: You talked about some of the Cup guys helping you out, but who inside or outside of racing, have been the biggest influences on your career?

Kennedy: Really I can’t pick any one person. There have been so many people — owners, people who have been trying to help me come up through. A lot of my first starts have been because we had a crew guy who worked for us back when who moved up to a big team and said “you need to give this guy a shot,” so they gave me a shot. The biggest thing growing up for me, racing-wise, I always kind of idolized Mark Martin. He was a gentleman driver. He’d take his blows, but he wouldn’t throw anyone under the bus, he wouldn’t throw a big fit over anything. I think watching him, growing up kind of set my mind on the psychology side of being a driver. Then, helping me on track, it’s really been everyone in the garage. I can’t pick any one; they’re always trying to help you. I think that speaks volumes for our NASCAR community.

Kennedy: I think driving for a smaller team, you’re able to get those opportunities and experience without having to have a whole lot of pressure. If I were to go, even on the Xfinity side, and jump into a JR Motorsports or a Joe Gibbs ride, you have to finish in the top 10. That’s expected, and the cars should be able to do that. But being able to come here, I’m here in the No. 33 and I’m getting experience. They’re here to help me, whereas going to a big team, you don’t always know that going in. Also, the crew guys themselves are great guys. They’re here because they want to do it, and the team aspect is actually a lot tighter-knit on some of the teams on this side. The guys on the [No.] 40 and the [No.] 33, and they guys over at BK Racing and places like that, it’s a little bit more tight-knit of a family.

Henderson: Talk about your goals for this season, especially as you see tracks for the second time starting this summer. You talked about getting experience, logging laps, but does that change as the season goes on?

Kennedy: It definitely does. As we go back to some of these tracks for the second time as a team, we start knowing where to start for practice and how to work our way up. Really our biggest goal is to go back there and be faster than we were. That’s something that once we get to the end of the season, we’re going to have to look back at how it all went. Sonoma will be the first track I’ve been to before. So I think our goal as we get towards the end of the year is to get back to these tracks and see progress and growth.

Henderson: Are there any tracks that you really have circled on the calendar as tracks you’re looking forward to?

Kennedy: I’m looking forward to Watkins Glen and Sonoma. We have experience there, and we were pretty quick at those two tracks last year, so that bodes well for us going into them. With this team, I’m not always guaranteed to be in the seat, but I would love to get a superspeedway race in. I ran superspeedway races in the ARCA series, and we’d start in the back and finish sixth. As a driver, I think I’m able to read the draft and work that very well, so I want to see how that would play out on the Cup side of things. So I’m hoping to get to a superspeedway sometime this year. Really, all the track we’ve been to have been good for me because I’m learning new tracks and learning how to handle the cars. I’ve enjoyed it because I know going into a road course, we’re going in with a good setup and I have experience on the track. Now that I’ve been in the car so much this year, I just have a lot more experience and comfort inside the car, so I can hopefully turn all that into a really good run for us.

Henderson: It seems like the road courses and superspeedways put the smaller teams on more equal ground.

Kennedy: Exactly. We don’t have the engineers that the big teams have; we don’t have the engineering dollars. So it gets a little tough trying to get it all put together and so going to a track where it takes it more out of the engineers’ hands and cars’ hands and puts it more to the drivers is really good for us. You’ll see guys even at Bristol and Martinsville where a smaller team like BK — [Matt] DiBenedetto ran really well at Bristol because he knew the track. It took me forever to get used to it because it’s such a tough place. Once I got used to it in the race, we were quick, but we were in the back to start with. I think going to those tracks plays into the little teams’ favor a little more.

Henderson: What do you like to do off the track — what’s fun right now?

Kennedy: Actually, I still work nine to five. We have our own software development company, which I manage, in New Mexico. I’m a part time student at Texas Tech online, so it’s really busy when I get to go home. I don’t get a whole lot of off time. Where we live, we’re kind of in the middle of the desert, so there are a lot of off-road toys that we like to go play with and stuff like that.

Henderson: You mentioned school; what degree are you working towards?

Kennedy: Right now, I’m almost done with my Bachelor’s degree in general science. The way Texas Tech structures it, there’s only so much you can take online, and there’s no way I could go to an actual campus. But I can get a bunch of engineering background done. I won’t get an actual engineering degree, but it’s kind of cool; they have a Master’s program you can go into from this and get your Master’s in an engineering field, so if I choose to proceed that much further into it, I can. Right now I’m just looking forward to finishing my Bachelor’s and focusing more on our company and on the race team.

Henderson: What does your software company do?

Kennedy: We build software for schools. We make digital video control systems for schools. You know how back in the day, you used to have to roll a TV cart into the classroom? Well, now schools have a TV hanging on the wall, or a smartboard, and we do a bunch of managing video displays and projectors and TV’s and all that, giving them the option to broadcast their own news channels and everything like that.