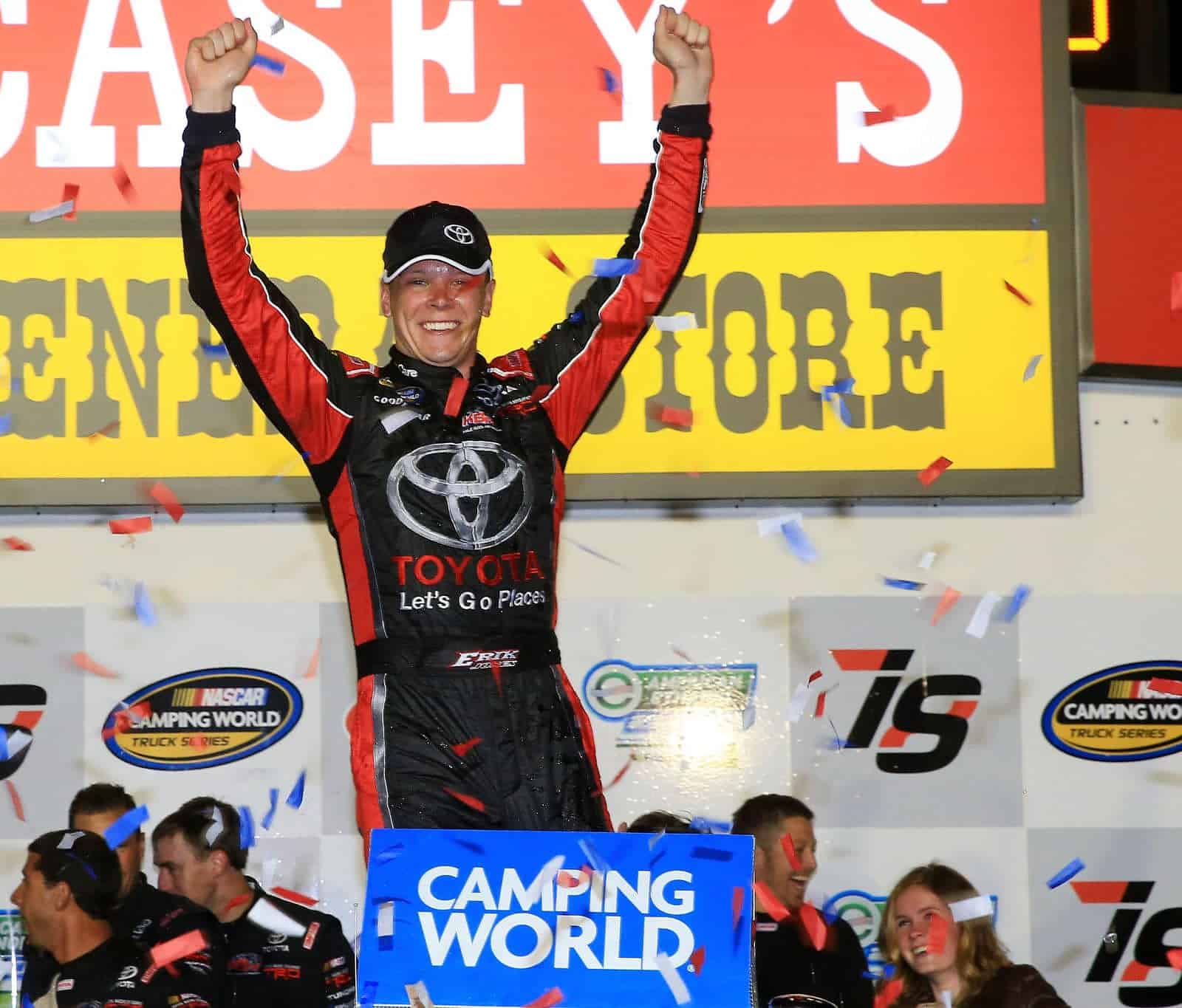 No one doubts Erik Jones’s ability behind the wheel. The Kyle Busch Motorsports driver had four career NASCAR Camping World Truck Series victories coming into 2015, but following the first eight races of the season, all anyone could talk about was why hadn’t he been able to visit victory lane in a truck this season? Heck, he’d already won an Xfinity Series race. Surely it’s easier to win in his full-time ride, right? It wasn’t for a lack of trying. Jones has led over 30 laps in all but two starts this season and scored four poles on the way to an astonishing 2.3 average starting position. Dominating performances at Kansas, Charlotte and Dover ultimately left the 19-year-old driver disappointed, with fuel mileage, a late caution and pit strategy costing him the victories.

Fast forward to this weekend. Two tracks, two series, two victories. Jones easily won the pole for the Truck Series’ American Ethanol 200 and threw that monkey off his back with authority, leading 112 laps on his way to Victory Circle. Two days later, Jones defeated fellow young gun Ryan Blaney and Sprint Cup interloper Austin Dillon in the Xfinity Series’ Owens Corning AttiCat 300 at Chicagoland in Joe Gibbs’s No. 54. Dry spell over, look for Jones to add more victories in both series before the year is over.

Chicagoland’s race weekend is one of few standalone races on the Xfinity Series schedule this year. With only one Cup driver — Dillon — scheduled  to race, the weekend was touted as an opportunity for NXS regulars to finally go toe-to-toe in pursuit of the victory without Sprint Cup stars stealing the show. Names like Blaney, Chase Elliott and Daniel Suarez were expected to contend for their first victory of the season. So who won?

Jones. On a weekend that should have seen an NXS regular take home the trophy, a Truck Series driver continued the trend of interlopers going to victory lane, leading 94 laps and holding off Blaney and Dillon when the checkers flew. Why is it so hard for the NXS drivers to win, and on such a “special” weekend? Besides a restrictor-plate triumph for Ryan Reed and two wins for his teammate Chris Buescher, no other NXS regular has visited victory lane this season. Regulars collectively won 10 times last year, four in 2013, 14 in 2012 and six in 2011. If this trend continues, 2015 might not see many more NXS regulars in victory lane.

The motorsports world woke up to unexpected news last Wednesday: Dale Earnhardt Jr. is getting married! Junior popped the question to longtime girlfriend Amy Reimann while on vacation in Germany. Needless to say, she said yes.

I'm completely overwhelmed with love & joy. Happiest girl in the world! I love you so much @DaleJr pic.twitter.com/lBxbFLJ4xf

The outpouring of congratulations to both on social media was huge; perhaps it could be considered the digital equivalent of the receiving line his father drove through after his Daytona 500 triumph. It’s wonderful to see Junior today — happy, contending, content, and engaged — and know that the dark ages of his career are well over.

The Phones Are Nearly Silent

Road-course ringers used to add an extra bit of excitement to the Sprint Cup Series’ dates at Sonoma and Watkins Glen. With the majority of Cup drivers not completely acclimated to turning right at full speed (and shifting and pitting on the opposite side), an accomplished road racer might be able to hop into an underfunded car—sometimes even a fully-sponsored, top-flight ride—and mix it up with the likes of Dale Earnhardt, Rusty Wallace, Jeff Gordon and Tony Stewart. Fans watching the ticker across the top of the screen would see names like Boris Said, Ron Fellows and Scott Pruett running up front.

The best they could ever do was second, but it was sure fun to watch them and see if they could dethrone the kings of the road courses like Gordon and Stewart. As the years passed, Cup regulars became more comfortable with the format, closing the talent gap and keeping these ringers out of top rides. The last time a specialist finished in the top 10 was 2010 (Said, Sonoma, eighth place). The last time two finished in the top 10? Watkins Glen 2005 (Said finished third and Pruett fourth). Only Said, Alex Kennedy and Justin Marks are on the entry list this weekend. Sonoma 2015 will be another chapter in the winding down of an era.

A few days ago, a Motorsport.com article circulated around social media making the case for Danica Patrick’s inclusion into the NASCAR Hall of Fame. Insert double take here. Hall of Fame career? Until Patrick can run consistently in the top 10, make the Chase, win a race, really do anything more than what she’s done up to this point, this shouldn’t even be a conversation. The Hall of Fame belongs to the elite. Could she be an elite driver one day, however? Absolutely. Patrick has made strides, especially this season, and has a long career ahead of her. She’s without a sponsor next year? She’ll get one. She might leave Stewart-Haas? Maybe a ride in lesser equipment will lessen the immense pressure placed on her to succeed. The article rightly points out that Patrick is the first female racer to have any staying power at the Cup level. Sometimes it takes time to acclimate. Juan Pablo Montoya took three years to consistently run well. If Patrick can continue to run well and improve, a convincing case most definitely could be made.

Dale is a 40 year old man, not a man child the way people have been presenting their stories regarding him getting engaged this past week. I feel bad for his family and him, they moved on and the majority of fans did not. No wonder he wanted to hide out for so many years, who in their right might could blame him? He is not a child, so him getting engaged at this late stage of life doesn’t deserve the posts and stories as if he was a teenager. Kinda weird, especially the Jeff Hammond article..Yikes.

As for DP, she will never “improve” to be a HOF member…let’s dispel that myth pronto!

I read that article about Danica and the HOF. It was a total “what if” piece but the comments from fans shocked me. It seemed like a bunch of idiots. Half of them seemed to imply that the article was fact and that she WAS going to be in the HOF and that it was a done deal. It was like they didn’t really read the article, only the headline and then commented.

With the long list of deserving drivers with real HOF stats on the waiting list, I can’t see it happening any time soon. And if she does get in, it will be for the same reason she gets all the attention she gets now, her gender. If you took all the drivers whoever ran a NASCAR race, put their stats on a piece of paper without any names or other personal information, her stats wouldn’t even be notable. She’s done nothing that is HOF worthy.

I totally skipped the Danica article, I figured it was just clickbait and IMO she certainly hasn’t achieved enough to deserve a place over others in NASAR’s HOF. If they are going to induct the first female, well there are other more deserving female drivers who competed many years before she came into the sport. As far as Jr getting engaged, that’s a happy thing for him and very nice for him and his family I’m sure. I didn’t read any of the articles and I don’t follow him on twitter so other than the announcement on I guess it was jayski, it was just another piece of news, like the fact that he’ll have a different sponsor for this weekend. I’m sure if I was a Jr fan, I’d be more interested.

I don’t understand what would merit Danica in the Hall of Fame. Gender isn’t merit. Outstanding talent has not been displayed. She drives in NASCAR because she has a sponsor that is willing to put her in a car.

I’m not anti-Danica. I would say I’m anti-stupid thoughts.

Maybe Danica can make the Nascar HOF if they institute a fan vote… the same way she became an All-Star.

Don’t give Brian any ideas! Hopefully he won’t see your comment.