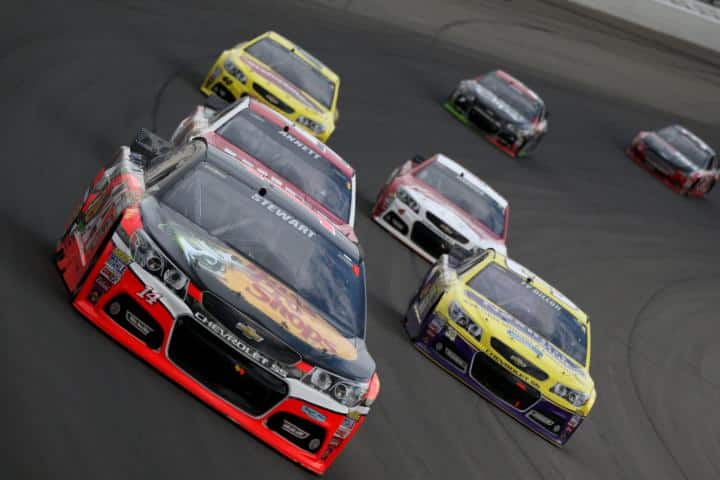 The 2015 racing season is roughly halfway complete. Let that sink in for moment.

It’s been nearly four months since Joey Logano’s spirited drive to Victory Lane in the Daytona 500, three months since Lewis Hamilton began his dominant 2015 F1 campaign with a win in the Australian GP, and two months since the debut of the much-criticized aerokits for the Verizon IndyCar Series in the Firestone Grand Prix of St. Petersburg.

For students, the midway point of the semester brings midterm grade reports. And while some students are left proud of their performance, others attempt to hide them from the sight of their parents.

What if the top racing series were given midterm grades? How would they fare? Let’s take a look at how they’ve done so far.

Ask any Formula 1 fan about the series, and they’ll all tell you the same thing: You know who’s going to win before teams even get to the track.

Save for one brilliant strategy play from Sebastian Vettel’s Scuderia Ferrari team in Malaysia, Mercedes has dominated the F1 field, winning six of the first seven grand prix.

Mercedes’s dominance is a similar story to 2014. However, the battle between the team’s drivers has been less fun to watch this season. Hamilton has risen a level above teammate Nico Rosberg, taking six poles, four wins and seven podium finishes in the first seven events.

Even more impressive, Hamilton has led just over 69% (306/441) of all laps ran in the 2015 F1 season thus far. The incredible results have the British driver sitting 17 points – only eight points shy of a full-race advantage – ahead of teammate Rosberg.

Mercedes’s dominance, while great for the team, is terrible for F1’s on-track product. Even worse, the gap between the rest of the teams has grown.

Mercedes holds a clear advantage over the field, with Scuderia Ferrari drivers Vettel and Kimi Raikonnen holding the next two positions in points. The Williams Racing lineup of Valtteri Bottas and Felipe Massa are a step behind Ferrari in fifth and sixth, but hold an advantage over Red Bull Racing drivers Daniel Ricciardo and Daniil Kvyat in seventh and eighth. None of the teams have the speed to make any significant ground on their rivals. They’re locked into their current positions.

The point battle highlights the biggest issue with F1 racing today: a severe lack of competition. While there are a few battles in the pack, the majority of F1 racing has become an over-glorified parade, with a clearly defined progression between teams.

The F1 championship is an amazing tour of the world, appealing to various cultures and fans around the globe. The series has a growing audience in America, and one of the most beautiful cars on the circuit. The series just needs to come up with a way to bridge the gap between teams and encourage good competition.

What a year it’s been for the Verizon IndyCar Series. Despite having incredible competition for much of the 2014 season, INDYCAR officials announced going into 2015 that the series would unveil new aero kits for the year.

The kits were met with equal parts fear and curiosity. The on-track product was already strong, but new aerokits provided something to get excited about.

Unfortunately, the new aerokits have come with a steep learning curve for teams and drivers. The first two races of the year became caution-fests, as the field worked through an obstacle course of aero kit debris.

The aerokit issues came to a head in IndyCar’s biggest race, when three flips and a life-threatening crash involving driver James Hinchcliffe forced the series to abandon track-record hopes for the Indianapolis 500 and require teams to qualify in race trim.

Luckily for the series, the Indy 500 itself was still a classic, with Juan Pablo Montoya overcoming early issues to beat teammate Will Power for the victory.

Circumstances outside of the series control added a sour note to the two biggest additions to the schedule. Rain forced an early end to IndyCar’s debut at NOLA Motorsports Park, and the series never even got to Brazil for the Brazilian GP after the race’s plans fell through.

Rain again plagued the field in Belle Isle, when weather caused a shortening of the race distance on both days of the Dual in Detroit.

Issues notwithstanding, the series has still been strong. American Josef Newgarden has two wins in the first 10 races, giving the United States someone to pull for outside of Ryan Hunter-Reay. Montoya’s resurgence following his return from NASCAR has been a feel-good story, and Sebastien Bourdais’s win in the second Detroit GP offered a glimmer of hope for small teams looking to get to victory lane.

Still, INDYCAR officials have a mess on their hands. Team Penske and Chip Ganassi Racing have a firm grip on the series championship for the foreseeable future, and Honda is getting embarrassed by Chevrolet, with every Honda driver outside of Graham Rahal struggling, and only two wins in 10 races.

The Road to Indy has been fun to follow, with former F1 drivers Nelson Piquet Jr. and Max Chilton both competing in races, and new drivers like Stefano Coletti have shown glimpses of talent racing the series elite.

There are a lot of good things happening in IndyCar, the series just has a long way to climb.

The term has quickly carved it’s way into NASCAR infamy, with NASCAR Sprint Cup Series drivers absolutely struggling to pass at nearly every track on the schedule. Passes for the lead have come only during restarts and pit stops, save for the occasional pass from a dominant car.

Passing has been overly-challenging, damaging the on-track product and forcing NASCAR to announce a new rules package, which will be tested next month at Kentucky Speedway.

Still, NASCAR hasn’t been without stories. Kurt Busch and brother Kyle Busch have both overcome difficult moments – a domestic abuse case for Kurt, and devastating leg injuries at Daytona for Kyle – to find themselves both in contention to compete in the Chase for the Sprint Cup. Kurt’s already punched his ticket, claiming two wins in 12 starts and working his way inside the top 15 in points, while Kyle has shown speed and gone to victory lane in the Xfinity Series at Michigan.

David Ragan has filled in the role of super sub, driving in both Busch’s No. 18 M&M’s Toyota and Brian Vickers’s No. 55 Aaron’s Toyota. Ragan, whose last win came in 2013 with Front Row Motorsports, runs 24th in points as he fills in for Vickers, who is sidelined again due to blood clots.

Yet still, something is missing. The on-track product, while mostly free of 2014’s rampant debris cautions, has driven fans to the point of boredom. Ford has reached an all-time low, with only two victories from Team Penske, and Roush Fenway Racing struggling to crack the top 10.

A large group of fans haven’t even been able to follow along, with the Cup Series moving to FOX Sports 1 for many races in 2015.

The Xfinity Series and Camping World Truck Series have finally given what fans have demanded for years, with fewer Cup Series drivers competing, but have paid with small fields (seriously, only 30 trucks at Texas?) and waning interest.

NASCAR has a lot of good stories, and Toyota is finally back to elite form with the new rules package, but the series needs to improve its on-track product before fans decide to save money on tickets and change the channel at home.

Yea, that B- for NASCAR, someone is getting some France cash under the table.

russ
Reply to  Steve B

In baseball they call it “home cooking” I think. Anybody could have predicted the order the various sports would be ranked, although perhaps not the actual letter grade..

Guru
Reply to  Steve B

You’ve gotta love how some “fans” just blindly assume that anyone who offers any praise for NASCAR is being paid by NASCAR.

Hey, here’s a thought, maybe NASCAR has actually been better than F1 and Indy this season. Maybe your conspiratorial nonsense is not based in any sense of reality.

Babies are now “great stories for fans to follow”? Used to just be a fact of life instead of a storyline. Such is the lot of pushing personality over competition.

NASCAR with a better grade than IndyCar? While this piece is 100% subjective, it is hard to believe that anyone outside of an ardent NASCAR supporter would grade them higher. Aside from some questionable calls from race control (not like NASCAR is immune to that and some), the racing has been fantastic at most of the events. NASCAR on the other hand is almost exclusively follow the leader aside from a few circuits. Formula 1…well they’ve set themselves up in a box but the announcing team on NBCSN can make up for the worst races.

Coming from Indiana, I’m honestly more partial to IndyCar. I love the series, and think that is has stellar racing in normal conditions. However, the issues the series has had with ugly rain-shortened races, as well as the aero-kit debris debacle and complete loss of the race in Brazil are what led me to lower their grade.

I think IndyCar will have the better season overall. They’ve worked out most of the kinks with the new cars over the first half of the season. Now they’re ready to shine. Unfortunately, I was grading on what HAS happened, not what will.

As for F1, I love their tour. It offers fans a chance to see the different tracks around the world. I really hope the proposed changes make the on-track product as stellar as the tour itself.

No mention of the best of the lot NHRA, where you can be up close in both competion & pits action.