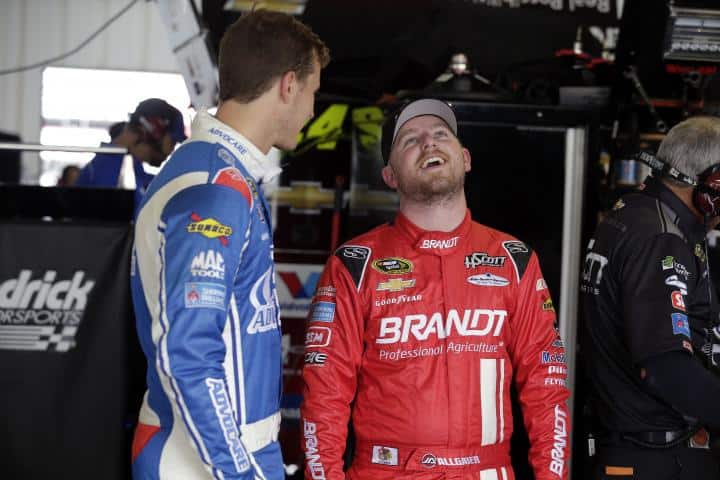 The journey to success took a while for the 2008 ARCA Series champion, a young stock car racer who fought hard to scale his way to the peak of NASCAR’s mountain. Justin Allgaier first worked his way into Team Penske’s development program, rising up into then-Nationwide Series Victory Lane with an eye on a Sprint Cup seat someday.

But then, as often happens his sponsor had other plans, leaving stage right while his employer, Mr. Penske no longer had room at the inn. Allgaier later landed at what was then known as Turner Scott Motorsports, running the Nationwide Series full-time and keeping his dream afloat to one day race at the Sprint Cup level. After several competitive seasons there, owner Harry Scott bought the assets of James Finch’s Phoenix Racing, finally giving the Illinois native a home at the top. The Sprint Cup Series promotion came paired with a sponsor, Brandt, that has been by his side since 2011, providing the perfect mix of stability and support.

Allgaier, 29, is in the midst of his sophomore season piloting the No. 51 Chevrolet for HScott Motorsports. Recording his first top-10 finish at Bristol in April, he is searching for consistency with a team that is being built from the ground up by veteran crew chief Steve Addington. Can they step it up in the sport’s second half, hang on to a top-30 spot in series points and perhaps even challenge for a win? Allgaier spoke with Frontstretch at Pocono about the organization’s improvement this year after expanding to a two-car team, his interest in graphic design and life as a father.

Joseph Wolkin, Frontstretch: How have you improved entering your sophomore season in the Cup Series?

Justin Allgaier: I think for me, having a year under my belt of learning the other competitors, learning the team and things like that have been good. I feel way more comfortable. I feel that I can go out on the racetrack in practice and know what I need to look for, whereas last year I would spend the majority of practice just trying to understand what I was looking for feel wise. That has been the biggest advantage this year; just understanding the cars a little bit better and knowing where I want the racecars to be when I get on the racetrack.

Wolkin: Michael Annett was brought onto the team to give it a second car. How has that helped you guys this season?

Allgaier: First and foremost, it has helped with knowing when you get to the racetrack that you don’t always have to try all of the different scenarios. They can go down one path and we can go down another. We can cover twice the amount of distance on a race weekend. Michael and I don’t necessarily want the same thing when it comes to how the racecar feels, but we are very similar in a lot of ways. We tend to want a similar feel all the time. It doesn’t always mean that you are going to get where the two drivers want to be at feel wise, but if you have two guys going in the same direction, we can work harder at that event or down the road to make up for those deficiencies.

Wolkin: What additional resources does two cars open up for the team?

Allgaier: I would say resource wise, that has always been the biggest struggle. Having two teams, we added some more cars just to offset having a two-car team. As far as shop personnel and things like that, we haven’t really changed a whole lot from where we were last year. We are definitely pushing along with some areas that we are excelling at, and we have some areas where we are deficient at. As a team, we worked really hard over the offseason to make sure that we are firing at all eight cylinders, whether it is at the track or at the shop.

Wolkin: What do you think you guys need to do to contend for top 10s more frequently?

Allgaier: I definitely think budget-wise, we are not where some of these larger teams are. We are banking on their help in a lot of areas. We have a great relationship with Hendrick [Motorsports, engine and chassis provider] and Stewart-Haas [Racing]. We are asking for help from them, and they do a great job to help us the best that they can. There are always going to be things that they are going to learn and do which may not trickle down to our race team. There are certain areas… I wish we could go to the wind tunnel more and spend more time on the seven-post shaker rig. At the end of the day, we feel we are doing the best we can with what we have. There is so little time between these cars anymore and the fields are so close together at all of these tracks. We are not off by much.

Wolkin: With Steve Addington atop the pit box, how has his experience with plenty of years as a crew chief helped you as a driver?

Allgaier: It has been huge. Steve is an awesome crew chief, especially with his experience winning races. We have a great group of guys that have a lot of experience in this garage area. For a driver like myself that is new to the Cup Series, that’s huge. One thing about it is, you can’t buy experience and you can’t buy knowledge. You can pay people to come in that have the knowledge, but you can’t buy that knowledge. I feel like that is what we have been able to do with adding the guys that we have on this crew.

Wolkin: Brandt has been backing you for a while now. What is the future shaping up to look like with that partnership?

Allgaier: I’ve been very fortunate that Brandt and I have been partners for the fifth year now. It starts at the top. I’ve been really good friends with Rick Brandt, the CEO, but it goes all the way down to the guys that work at the plants and the customers. We call it the “Brandt family” all the time when we are talking about it because it really is like a family aspect. Hopefully, my big thing with them is making sure this makes sense for their business model. That is what the ultimate goal is. We need them to get what they need out of the sport, and so far they have. They keep coming along and being involved in it. As long as we can keep doing that, hopefully it will last for a long time.

Wolkin: You do a lot of design stuff with Greg Stumpff, and he told me you have a whole binder of designs in his shop. How did you get into that?

Allgaier: My grandfather was a part-time artist and was always building something with the house. My dad was a good drawer and always used to help me out when I was younger. When I was 12, he bought a vinyl plotter, a graphics machine that I learned how to use. I made all of the decals for my racecars, and it is just something that has stuck with me over the years. I enjoy seeing things start as an idea and ultimately end up on the side of a racecar or on a wall or helmet, it doesn’t matter.

Wolkin: Do you have a special section dedicated to doing your art stuff in your house?

Allgaier: We have an office in our house and my wife has most of the office because she does all of the bills and everything like that for the house. I’ve got a little desk in the corner and all of my stuff that I go through. I have pads, pens and paper stashed all over the house and motor home, so if I get into one of those moods where I just want to draw, I can just grab it and go to town.

Wolkin: How has your life changed since you became a father?

Allgaier: Oh man, when you become a dad or when you become a parent period, it shifts your focus. For me, I look at my daughter and I want to provide for her the best that I can. I picture my work differently. I picture my spare time differently. It has been cool to see her milestones and things that she has accomplished. She’s only almost two, but just seeing some of the things that she has been able to do and the hurdles that she has been able to overcome has been awesome. That has really changed the outlook I have on my racing career and on my life in general. I can’t imagine my life being any different.

Happy Father's Day @j_allgaier! Harper is so lucky to have such a sweet & caring daddy! #bestdaddy https://t.co/B7gdRPKUlm

Wolkin: Do you want her to be a racer?

Allgaier: My wife says no. For me, I don’t care either way. As long as she is happy doing whatever it is that she chooses. My family, particularly my dad, is very adamant that we don’t do anything unless it is our main focus. He gave me the opportunity to be a racecar driver, but if there was ever a time that I didn’t want to do it, we’d go and park it and do whatever it was that I wanted to go do. I think for my daughter, I think it is going to be the same way. If you are happy with what you do and enjoy it, it is not really like work. I want her to never have to work in her life. I want her to be happy doing whatever it is that she loves and have a career that she loves doing.

Wolkin: Heading into the final half of the season, do you feel that you can sneak into the Chase?

Allgaier: This whole win and you’re in thing for the Chase is really cool, especially being with a smaller team and having that opportunity. At the same time, we put ourselves in the best position that we believe we can be in every week. If something happens, that changes the game if you make it. I don’t know if we would make it past the first cut, but I’d be OK trying. I would definitely love to have that opportunity, but at the same time, we have a great team and we are going to keep plugging along.

Wolkin: With the rules package being what it is this year, what changes can NASCAR make to enable more passing?

Allgaier: Unfortunately, that is the age old question. Obviously, NASCAR doesn’t have an easy task in front of them. They made a rules change to slow the cars down and they ended up going faster. My personal opinion is we need to take some aero dependency off these cars. It would let us drive up next to somebody and not have their air wake or flow disrupt your car. If we can’t do that, I don’t know. It’s a tough one. It really is.