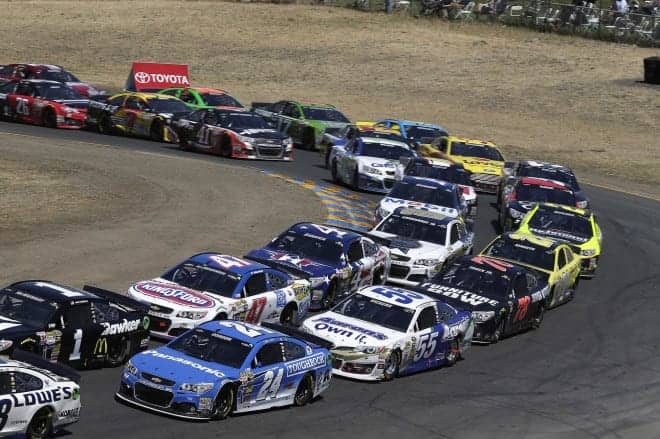 The second off week of the season has now come…and nearly gone. It was relatively quiet this week, outside of the royal proposal in Germany of Dale Earnhardt Jr. to longtime girlfriend Amy Reimann. She (of course) said yes and now, the NASCAR world can celebrate Dale and Amy’s engagement this upcoming week in northern California’s wine country. How fitting for the week back from such big news.

This week was also the last Sprint Cup off weekend until the end of August, when teams will be preparing for the Chase. Many of the series’ drivers were seen via Twitter enjoying time with friends and loved ones, soaking up the sun on beaches from North Carolina to the Caribbean. Gotta make the most of your time off, right?

Now, it’s back to the racing after this brief respite. This upcoming weekend’s Toyota-Save Mart 350 at Sonoma Raceway will be the first road-course race for the Cup Series this season. This weekend is significant for two reasons. First, it’s the last Sprint Cup race of the year for the FOX Sports team. We’ll see what NBC brings back to the sport after their nine-year hiatus when they cover the Coke Zero 400 July 4th weekend from Daytona. And, in perhaps the bigger excitement for this race, it’s the first one with the new 2015 rules package on a road course. That includes the debut of rain weather race tires from Goodyear, plus some new additions to the car for inclement weather only to be run at the two road courses on the Cup schedule.

It will be interesting if rain comes our way on Sunday. As of right now, the forecast for Sonoma, CA is 80 degrees, partial sun with only a 10% chance of rain, so we might not get to see these new tires Goodyear has tested for the road courses this year. Kentucky may have our attention but let’s not forget about these changes, too.

Onto this week’s Mailbox questions from you, our readers…

Q: I’ve read that they will have the rain tires on hand at Sonoma this weekend, just in case. Does this mean they would do a pit stop to change to rain tires from slicks under green? What do you think of the racing we’ll see on these new tires if there’s rain? Thanks. – Peter J., Conway, Ark.

A: I’m really glad someone asked about the new tire package for this weekend, Peter. The rain tires that Goodyear has provided for the Sonoma race weekend should be much softer than these drivers are used to, providing for even more grip going into those left (and right) turns around the 2.52-mile course. I’ve looked into the procedure for rain, the tires, and if there would be pit stops for changing into rain treads under green. The best I can conclude based on the rules and the fact that we’ve not done this yet in the Cup Series is that there would be a caution flag thrown for rain, then a competition caution would ensue for all teams to change their Goodyear Eagles to the rain tires.

As for what my opinion is on the racing, we’ll see if there is rain on Sunday. I think it would be extremely fun to watch what happens, because I think even the best drivers in the Sprint Cup Series might show that they’re just mere mortals driving those 725-hp racecars in the rain. Don’t forget also that under the 2015 rules package, NASCAR also mandates that all cars have a front wiper, a window defogger and a rear flashing rain light. While these things seem insignificant to most drivers like you and me, when you add these to a racecar going 130 mph, that could really change the game.

Like I said in the intro, right now the forecast for Sonoma is looking good, so I don’t think we’ll get to see the teams try out the new road course rules package. However, knowing it’s there just in case (and will be again later this summer at Watkins Glen) is really intriguing even to the most oval-loving fans.

Q: Hi Greg, with tech-giant Microsoft now joining the ranks of NASCAR’s top sponsors, what do you think the future of tech companies engaging with the fan base, spending their sponsorship money with racing teams will look like? Good thing/bad thing? – Martin B., Greenville, S.C.

A: Hey Martin, thanks for the question this week. The Microsoft sponsorship is really, really intriguing for both right now and down the road for NASCAR; it honestly came out of left field as far as timing for announcing a major sponsor goes. The tie-in with Hendrick Motorsports and sponsoring the No. 88 Chevy SS of Earnhardt Jr. supporting the launch of their new Windows 10 operating software does make sense; it’s just late in the game to make such a big-money deal for one of the sport’s top teams.

I will say if you’re going to team up with a sport like NASCAR, you might as well go to the top in terms of aligning your brand with arguably the most recognizable and sought-after “brand” in the sport in Earnhardt Jr. Although he hasn’t been winning week in and out like some of his contemporaries (think Jimmie Johnson), Earnhardt is still one of the most well-known names in the sport by those in and even outside of NASCAR’s reach.

The direction NASCAR has very publicly taken over the last decade when it’s come to the integration of new technology into the sport, such as the inspection process trackside, or social media and their direct engagement with fans has been nothing but positive. Brian France, Steve Phelps and the powers that be at NASCAR have been at the forefront of bringing technology into the sport at a truly ground floor level and upward. They’ve been smart enough to know that the sport’s future was and is dependent on technology, both to improve the racing product on the track and bringing in new, younger fans on race day.

That transformation started back in 2004 when Nextel (later Sprint) joined the sport, bringing with them an entire network (literally) of technology servicing the millions of customers of the wireless provider at each track. That also eventually brought in sponsors like Freescale, and HP – an official technology sponsor. So Microsoft really is just joining a list of tech sponsors that have helped elevate our sport to where it’s at today. I think this signing is tremendous for NASCAR, and potentially for the future title sponsorship of the Sprint Cup Series; keep in mind Sprint leaves the sport in 2016.

NEWSLETTER: New Sponsor Launching Hendrick Even Further Above The Rest?