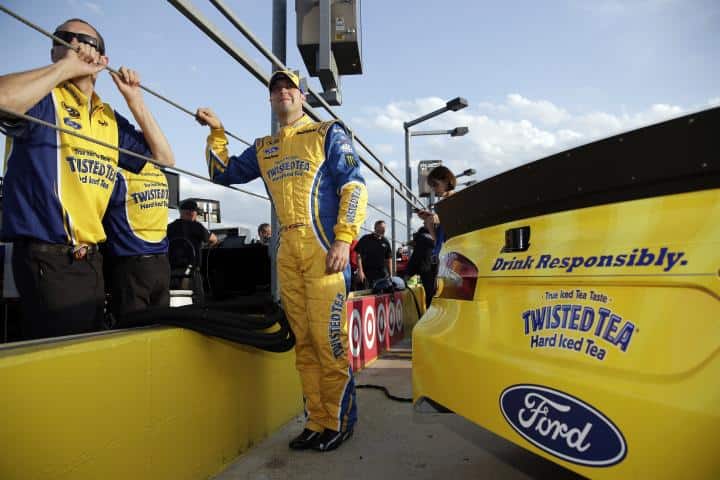 Walking around the NASCAR Sprint Cup Series garage, it is pretty difficult to miss seeing an Indianapolis 500 champion. With long sideburns and a new fire suit, this former Team Penske driver has finally landed back in NASCAR’s premier division.

Prior to this season, Sam Hornish Jr. had not raced in the Daytona 500 since 2010, and he hasn’t been to a handful of tracks in a Cup car since then. His journey is well-documented after losing his Cup ride with one of the sport’s most successful teams, but since then, Hornish has landed back on his feet.

He ran two full seasons in what is now the Xfinity Series, and that led him to Joe Gibbs Racing, where he won a race and finished in the top five four times last year. The success was enough to gather the attention of Richard Petty Motorsports when Marcos Ambrose announced he was returning to Australia to race in the V8 Supercar Series. Now, it is Hornish’s time to be back in the spotlight.

“I think the new rules package has definitely made it a little more difficult,” Hornish told Frontstretch at Pocono. “I think that is just for RPM as a whole. We had to look at a lot of our setups and change a lot of things. We need to try to get where we need to be. The cars are handling a lot differently than they did last year.”

Hornish, 36, sits 25th in the championship standings after his first 15 races with RPM. Recording four top 20s (Daytona, Bristol, Talladega and Kansas), the results have not been what was expected of the former IndyCar star.

While his struggles are seemingly caused by not being in a Cup car for quite some time, he believes that is not what has gone wrong this year. With a new aero package in the Cup Series for the 2015 season – one that Hornish was not able to test prior to the season – the No. 9 team has fallen behind.

“We need to be better than where we are at right now,” said Hornish. “We continue to work hard at it, and the [No.] 43 team continues to show us that there is a lot of light at the end of the tunnel. They seem to be clicking on all eight cylinders. If things go right, we can go run right with them. We just need a little bit more speed on any given weekend. When we have a pit penalty or some kind of other issue, it keeps us from maximizing so that we can overcome that.”

15 races into the season, Hornish is 10 spots behind teammate Aric Almirola, RPM’s lead driver that made the Chase last year with a win in the rain-shortened race at Daytona in July. Consistency has been key for the No. 43 team, along with minimizing mistakes. Meanwhile, Hornish has experienced tough luck, putting him behind before the green flag is even waved.

At Pocono, a track that he called his favorite, Hornish had a lazy spin early in the first practice session. He qualified 24th, slightly better than his average starting position of 26.6, and finished 41st after having another single-car spin during the race.

The struggles forced RPM to make a desperate move after Talladega. Crew chief Drew Blickensderfer, who has been with the team as a crew chief since the conclusion of 2012 with Ambrose, was out. Kevin “Bono” Manion was hired to lead the No. 9 car for the rest of the season after serving as Alex Bowman‘s crew chief with Tommy Baldwin Racing to start the season. With the change, there hasn’t been much of a difference in results, but Hornish is poised for success entering the second half of the Cup Series schedule.

“With where we are at with everything, we didn’t feel like we had a lot of time to make these types of decisions,” he explained. “It is something that the team decided to help us progress and add more depth to the engineering side. Drew is continuing to work with our team and doing a lot with engineering and aerodynamics and stuff like that.

“I feel like this has strengthened our team all-in-all. We’re going to try to move forward with our racing results, too. He [Bono] has a lot of experience and he also has a lot of time in the crew chief position, making race calls and knowledge of other things that are going on in the pit area.”

Manion’s success is what RPM needs to move forward. In 333 starts as a crew chief, he has won five events, whereas Blickensderfer had three wins and none since 2011. Included in Manion’s stacked resume are victories in the Daytona 500 and Brickyard 400 in the same season with Jamie McMurray, adding hope for Hornish that he can sneak in a win and earn a spot in the Chase.

But why would there be a crew chief change after the 10th race of his time with the team?

Sponsorship dollars are limited on the No. 9 car. When a company doesn’t sign on for a weekend, team co-owner Andrew Murstein puts his Medallion Financial Corp. (NASDAQ: TAXI) on Hornish’s vehicle. It’s not something that is unforeseen from Murstein, however. After investing in RPM in Nov. 2010, he put his company’s logos on the team’s cars multiple times, starting with AJ Allmendinger at Pocono in 2011 – the closest track to the New York City-based group.

“We bring people in, show them a good time at the race track and let them see the benefits of being involved in NASCAR and Richard Petty Motorsports,” Hornish said when asked about the team’s sponsorship hunt. “As far as the on-track stuff goes, that doesn’t really make any difference. We want to go out there and have good results, whether we have $1 million worth of sponsorship or $100 million worth of sponsorship.”

Thus far, he has had Twisted Tea on the car three times. After originally signing the alcoholic beverage company to a two-race deal (both Daytona races), RPM was able to show the benefit of having Hornish as the face of the brand, thus expanding the partnership to an additional two races at Charlotte and Dover in May.

The team has also brought in several new companies to the sport, including Nature Blast and Jacob Companies. With an uncertain future, locking up these sponsors for the long-term is a key to gathering momentum for a driver that’s essentially getting to re-live a dream.

“I can’t look at it that way,” Hornish explained about the possibility of this being his last major opportunity in the Cup Series. “If you look at it from that point-of-view, you are focusing on the wrong things. I’m just looking at it as a great opportunity to be with some good people and try to do as much for myself as I can and the team as well. We have a lot of growing to do to get where we want to be. I’m glad to be a part of it.”

Becoming a face of a company like Almirola is with Smithfield is the ultimate goal for Hornish. If the No. 9 team can lock in a sponsor, his future will be much more secure. Until then, things are up in the air.

Hornish stated that RPM and he have not discussed a contract extension beyond next year, citing that it is too early to do so, along with the need “to work on what we’re doing this year.” For a driver that has been racing on year-to-year deals for multiple season, he is more relaxed than ever as he believes he has found a home at RPM.

“This is where I want to be, so if you want to be in the Cup Series, you have to take everything that is thrown at you with it.”