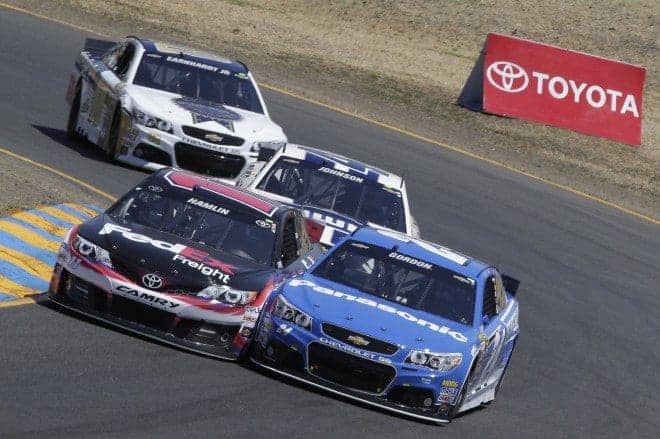 With the NASCAR Sprint Cup Series set to race through the winding turns of Sonoma Raceway this weekend, many fans are expecting to see one of the best races of the season — partially because of the absence of the words aero-push and clean air, but also due to the parity road racing creates these days.

For those reasons, and because cookie cutter tracks seem to put on boring show after boring show, many NASCAR fans are calling for the inclusion of another road course on the Cup schedule. Road America. Mid-Ohio. Lagnua Seca. Circuit of the Americas. All of these are fine tracks, and if they get added to the schedule, they will join a short list of other road courses the Sprint Cup Series has raced on since its inception.

Here is a primer on each.

This is the obvious one for anyone who’s spent just a little time digging into NASCAR history. Before the behemoth Daytona International Speedway was constructed, drivers took their cars onto a combination asphalt and beach course located along highway A1A in Daytona Beach. The track’s configuration ranged from 3.1 to 4.2 miles, and was host to the second-ever NASCAR Strictly Stock race, won by Red Byron in 1949. The track hosted nine more races between 1950 and 1958, with Tim Flock and Marshall Teague winning twice each.

Located an hour north of Los Angeles, Willow Springs served as the Grand National Series first foray west of the Mississippi River, with 37 drivers taking the green flag in 1955. Chuck Stevenson won the inaugural race, beating Marvin Panch to the line by 500 feet. Panch won the second and final NASCAR race at the course the following year. The course still stands today, a 2.5-mile, nine-turn configuration that hasn’t changed a bit since it first opened in 1953.

Only one Grand National race was ever held in Montgomery, located in the Hudson Valley of New York. Rex White beat Richard Petty by a lap in the 1960 Empire State 200, but the race was so sparsely attended (only 5,000 showed up) that NASCAR didn’t return to the track again. It remains the only Cup-level race held in the Hudson Valley.

Located in Titusville, Fla., near the Kennedy Space Center, this 1.6-mile road course only held one Grand National race, in 1957. Paul Goldsmith won the pole and lead early before breaking a fan belt and retiring. Fireball Roberts lead the rest of the way and won the Indian River Gold Cup 100.

NASCAR’s first road race was held on a 2-mile tarmac course at Linden Airport in New Jersey. While the track would only host one event, it set the stage for the inclusion of other road courses on the Cup schedule. Al Keller won the race, one of just two drivers to complete all 50 laps on the day. It is also interesting to note that Keller won the race in a Jaguar, and afterward announced he was leaving NASCAR to join the AAA Championship circuit.

Roberts won the second Grand National race of the 1964 season at the 3-mile course located in Georgia. While the road course was only ever run once, the property’s oval course was raced at 12 times between 1962 and 1969. The track has ceased to operate, and now sits overgrown with brush in places. That hasn’t kept some cars off the track, however.

Bridgehampton Raceway was a 2.85-mile road course located in Sag Harbor, N.Y. It was host to four Grand National races in the 1950s and 1960s, with Jack Smith, Petty, Billy Wade and David Pearson each winning once. The track closed in 1998.

This track is usually the third that NASCAR fans immediately think of when asked to name a road course in Cup. The 2.62-mile track, located in Riverside, Calif., hosted 48 races between 1958 and 1988, with Bobby Allison winning six times. The track was sold to developers, closed following the 1988 season and was torn down. The property now houses a shopping mall and townhouses.

Why not mention the Road America event held in either ’55 or ’56? Off the top of my head, I think it was the latter.

1st, I could say protect Atlanta no matter what, 2nd, Look for Sebring, because they need dates, or East Bay, New Smyrna, Volusia County and Orlando Speedworld. I sense having a championship of racing markets, ie trying ArkLaTex, Magnolia, Restarting Nashville Fair, Houston Battleground, I-30, Memphis, Lexington , KY Motor, NOLA and Baton Rouge. Also, 3rd, I’d go with Classic Sonoma b/c that rewarded finesse, Long Watkins Glen vs. Short and Markets that need Road Races: Seattle Pacific, Portland, Pomona and tie a full circuit road course,too. and Road America, and Full Circuit Topeka, Brainerd and Sonoma because these specialisms drive me nuts, and why not include Gateway St. Louis? I feel deeper down, having a stronger inclusion of markets would help.

Thanks for the article!