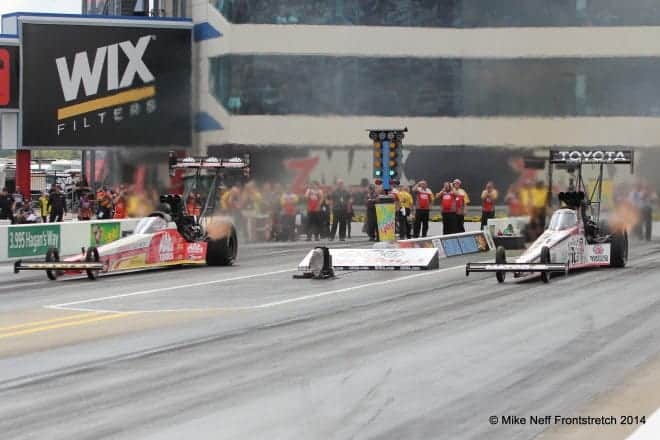 It’s been mentioned in this space before that television just does not accurately convey what it’s like to be at an NHRA event. No matter how high you turn the volume up, even with surround sound, it’s still not like hearing those 10,000 horsepower beasts in person. It’s more than just the sound, though. Not only is it not loud enough, but there’s no way for television to translate the feeling of being there.

That is not the fault of the broadcast; it’s simply something that’s just not possible. It’s not even really possible to explain it to someone. You can try. You can tell them to make sure they have earplugs because it’s deafening. You can explain you don’t just hear those cars, but you feel them as well, right down to your core. You can warn them that a couple of Nitro cars launching down the strip can only be described as terrifying, but in a good way.

It just does not really get through.

Television can’t really bring the NHRA into the home with all the sensations intact. Words are not sufficient to try to explain it to someone. What else is there? Just one thing, and it is the one thing, in an absurd sort of way, that explains it better than just about anything else. It is the Coca-Cola test. This video made the rounds a couple of months ago and it is, to date, the best explanation I have to offer to anyone who asks what it’s like to be at an NHRA event.

Our NHRA VIP Experience winner Bob McDonough was a guest of Ron Capps and the NAPA Auto Parts team last weekend at the Thunder Valley Nationals at Bristol Dragway. We’re glad to hear you had a good time, Bob!

Look for details coming later this summer for our next VIP Experience giveaway. We’ll be giving away another day at the races for a lucky fan, earning them entry to the NHRA Carolina Nationals at zMAX Dragway in Charlotte, N.C. in September.

2015 – Two final round and three semifinal appearances so far.

2011 – Made Pro Stock debut at the U.S. Nationals; earned first round win at the NHRA Fall Nationals in Dallas.

Some things most people don’t know about Chris: Twice this year he’s been in the finals, both times against defending Pro Stock champion Enders, and although he’s come up short on both occasions, it’s an impressive feat for McGaha’s very small team. The team is made up of just McGaha, his father, Lester McGaha, crew chief Brian “Lump” Self, Steve Hinojos, and Mike Stryker. Chris himself is the dyno man for the team, a job he actually prefers to driving. The team builds all of its own engines in-house at his engine shop, Southwest Performance & Machine, in Odessa.

Drag racing is a family affair for the McGahas. Both Chris and his father competed in Competition Eliminator. Not only is his father, who is an important part of the team, at every race but his wife, Holly, and mother Valois also try to make every event. Chris first started out in the Jr. Drag Racing League, a secret behind the success of so many drivers these days. His children, Mason and Berkley, have also tried out the Jr. league.

“I remember standing backstage with him and him just being wide-eyed, like, wow, I can’t believe I made the field in INDY,” said PR rep Kelly Topolinski of McGaha’s first Pro Stock start in 2011. “It was so cool! There were 28 cars there vying for 16 spots. Chris qualified No. 11 and Larry Morgan and Warren Johnson were two of the biggest names on the outside.”

Although McGaha would go out in the first round in Pro Stock at that race, he made it to the third round in Competition Eliminator, where he was eliminated, ironically, by Kevin Self, Lump’s cousin.

While we’re visiting with McGaha as our profile driver this week, it only seems fitting to get his crew chief, Brian “Lump” Self, in on the action too. Lump brings us our tech fact this week, explaining a little bit about Pro Stock tire strategy.

Career wins for reigning Pro Stock World Champion Enders, two shy of Shirley Muldowney‘s 18 on the “Most Wins by Women” list. If she passes Muldowney, Enders’s next goal would be to catch Angelle Sampey, but that’s going to take a bit longer. Sampey leads the list with 41 wins.

It’s an off-weekend this week for the NHRA Mello Yello Series. Action will resume next weekend, July 2–5 for the Summit Racing Equipment NHRA Nationals from Summit Motorsports Park in Norwalk, Ohio. This event is another live one so you don’t want to miss it!

It is very Coooooooollll that seal master is going to be the primary sponsors for J R Todd, kalitta Motorsports.