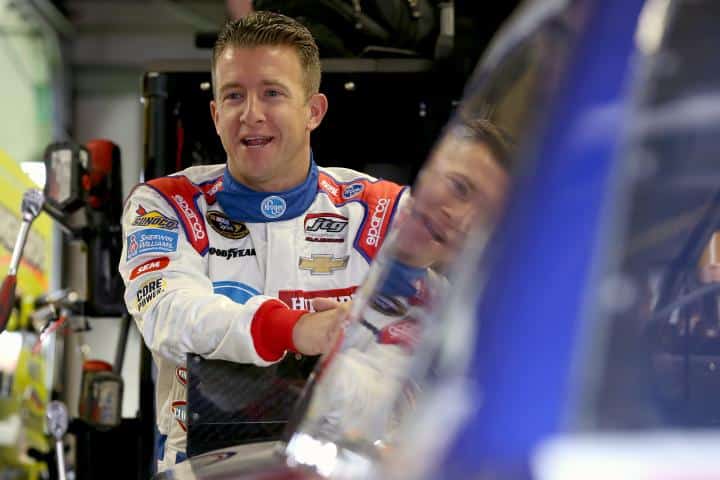 Road-course veteran AJ Allmendinger won the pole in NASCAR Sprint Cup Series qualifying at Sonoma Raceway. With a time of 74.385 seconds, Allmendinger scored the first pole for JTG Daugherty Racing, and his first pole since Kansas in April of 2012.

Allmendinger’s first attempt at a lap in the first session was disrupted for a spin by Michael Annett that brought out the red flag. When the 25-minute session resumed, Allmendinger ran a lap fast enough to advance. A spin by Kyle Busch in round two halted the session with seven minutes remaining but did not stop the No. 47 from scoring his first career pole on a road course.

Michigan winner and 2011 Sonoma race winner Kurt Busch qualified second with a time of 74.551 seconds. Matt Kenseth, who has not won a NSCS road-course race qualified third alongside Kyle Larson. Larson’s time in round one, 74.186 seconds, was a new track record. Jeff Gordon, in his final race at Sonoma, will start fifth.

Michael Waltrip Racing was impressive in qualifying with both Clint Bowyer (sixth) and David Ragan (ninth) qualifying inside the top 10. Tony Stewart will start Sunday’s 110-lap race from the seventh position with a time of 74.888 seconds. Casey Mears had an impressive qualifying time of 74.966 and will start eighth. Brad Keselowski, Kyle Busch and Martin Truex Jr. completed the top dozen. Both Busch and Truex have won at Sonoma, with Kyle’s victory coming in 2008 and Truex Jr.’s victory in 2013.

Previous Sonoma winners Jimmie Johnson and Carl Edwards were the first two drivers to miss the top 12. Johnson, who will start 13th, missed the final round by .114 seconds. Jamie McMurray has won the pole in Sonoma the past two years but had a lackluster showing in qualifying and will start 18th. Brendan Gaughan is the only driver to miss the field.