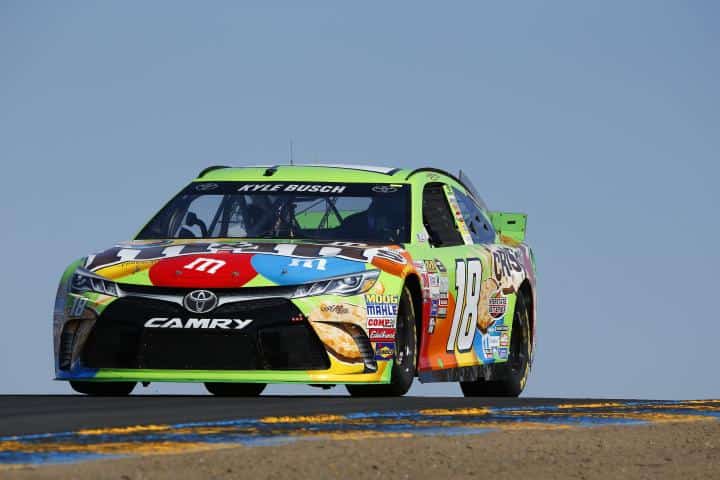 Friday afternoon saw the 44 cars entered in Sunday’s Toyota/Save Mart 350 take to the 1.99-mile road course to dial their cars in. With more combined practice time than the race is likely to last Sunday, teams had plenty of time to get an idea of where they needed to be.

With the long practices, teams would choose one session to do their mock qualifying runs. As a result, the cars who wound up with the quickest times became a little jumbled.

In the first practice, Clint Bowyer turned in the fastest lap at 74.979 seconds (95.547 mph) toward the end of the session.  AJ Allmendinger was nearly two-tenths of a second back in second. Sam Hornish Jr. was third in his No. 9 Ford, carrying new sponsorship from Jacob Companies. Danica Patrick was fourth while Jamie McMurray rounded out the top five.

No road-course practice session would be complete without some issues, and the opening session saw a few. Alex Kennedy and Aric Almirola had separate spins in the session, but neither driver damaged their cars. Casey Mears also had an off-course excursion and later ran out of gas while trying to figure out the all-important fuel mileage that historically plays a big role in the race.

In the second session, 2008 winner Kyle Busch was fastest with a lap of 74.489 seconds (96.175 mph) on his very first lap of the session. It is not quite track-record pace, but very close to a lap of 96.350 mph that McMurray put up last year. Teammate Carl Edwards was second fastest, followed by Kurt Busch in third. Bowyer and Martin Truex Jr. rounded out the top five.

During the session, Allmendinger ran 21 laps, but called it quits early due to what he described over the radio as a potential migraine and some neck pain. Overall, the team is very satisfied with their No. 47 Chevrolet and was more than happy to pack it in early.

HScott Motorsports’ Michael Annett was forced to stop but for a completely different reason. His No. 46 Bene-fit Chevrolet broke a transmission in the closing minutes of the session and coasted to a stop between turns 2 and 3. The team will be allowed to change the transmission without penalty prior to qualifying Saturday. However, Annett was only 33rd quickest in the first session and 42nd in Happy Hour.

One driver will go home, and unless he picks it up in qualifying, Brendan Gaughan might end up being the one once again despite his success in the Xfinity Series at Road America. He was slowest in Happy Hour and 43rd quickest in the first practice. In addition, Gaughan had an off-course excursion during Happy Hour that saw him get out in the dirt. Luckily, Gaughan’s Chevrolet was undamaged. If Gaughan can pick up the pace, then Jeb Burton would be vulnerable. Burton ran a session-high 34 laps in the first session, but was only 41st quickest, over three seconds slower than Bowyer’s quick lap. In Happy Hour, Burton moved up to 38th, but still isn’t quite fast enough to get out of provisional land.