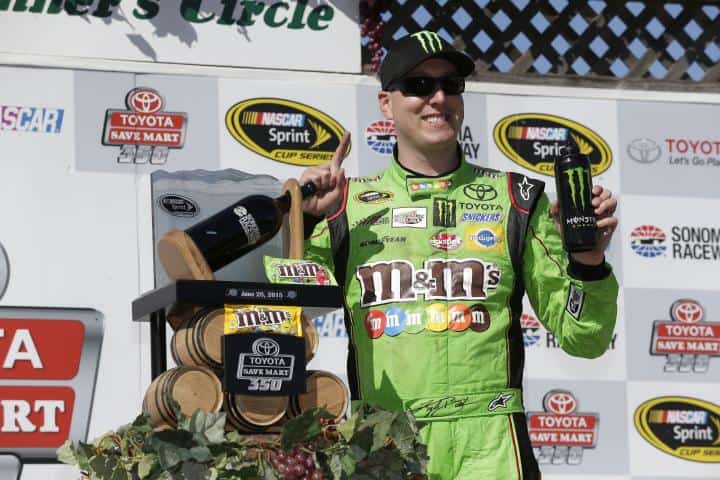 Kyle Busch turned a sunny day at Sonoma Raceway into his day of reckoning in the Sprint Cup Series as the 30-year-old – who is only four months removed from suffering a broken leg and foot at Daytona in February – took advantage of a brilliant strategy move late to hold off brother Kurt to get the emotional win in the Toyota/Save Mart 350.

“Just unbelievable,” race winner Busch said in Victory Lane. “I can’t say enough about my team, everyone at Joe Gibbs Racing, my medical team and everyone that got me back in shape and got me back ready to go and get back behind the wheel.”

For the second time at Sonoma and first since Auto Club in 2014, Kyle Busch lifted the victor’s trophy – something Kyle said in May that he missed most during his time on the side lines – with little issues with pain throughout the 110-lap event.

“My foot hurts a little bit but not as bad as I expected it to,” he said. “It actually hurt worse in practice, I think I warmed it up all day Friday.”

Restarting eighth on the final restart with seven laps remaining, Busch had four fresh tires and four drivers in between himself and leader Jimmie Johnson – plus an aggressive Clint Bowyer alongside and Kurt Busch close behind.

By the time the field entered the esses section, Busch already sliced by four cars, and by the end of the first lap was up to third.

Making easy work of second-place Jamie McMurray in turn 3 with six to go, Busch rounded up a slick pass on Johnson one lap later in the very same turn to grab the lead for good.

“I cant say enough about my brother,” Kyle said of brother Kurt who made it a 1-2 finish for the Busch brothers for the first time in Cup competition. “He certainly made it hard on Clint. I think it gave me some ground a couple times, it gave 10 lengths and then another eight lengths.”

Kurt Busch, who won the most recent event two weeks ago at Michigan, was on rails in the opening stints of the race, leading the opening 22 laps. The elder Busch said it was “an incredible drive all day” but above all, was proud of Kyle for his comeback victory.

“Congratulations to my little brother, I know this is huge,” he said. “He still has a long way to go to get him in that top 30. He is an incredible driver and I don’t know how many times we’ve finished 1-2 but we’ll let the other Busch brother win today.”

Kyle now sits 136 points outside the top 30 in points – which he must reach to be eligible for the Chase for the championship.

Bowyer was unable to stay with the No. 18 and fell victim to Kurt Busch to finish third – a stellar result in Bowyer’s lackluster 2015 season.

“I tried to get up through (Kyle Busch) and kind of get rough with him and beat him to it but he unfortunately beat me to that situation,” said Bowyer. “You get so close, I drove my ass off. I tried it just came up a little short.”

Kevin Harvick finished fourth followed by Joey Logano in fifth and Johnson in sixth who led the most laps in the race (45) but became a sitting duck on old tires on the last restart. The four-time race winner in 2015 said he would not have done anything different given another chance.

“If we came back tomorrow, we would run the same strategy,” he said. “We played it perfectly. We were one caution away from it working out just right.”

The race – as popularly predicted – witnessed multiple accidents and drivers on the edge of controversy.

David Gilliland brought out the race’s first yellow on lap 23 when a cut tire threw the No. 38 head-on into the tire barrier. The California native walked away.

Martin Truex Jr. and David Ragan made contact on lap 30, causing Truex to spin and strike the tires in the esses. Ragan, who would later be taken out in an accident with Carl Edwards on lap 80 in the same section, said he was done wrong by Truex’s contact.

Defending Sonoma winner Edwards was side-by-side with Ragan through the Esses before jumping the curb and taking himself and Ragan into the concrete blocks and tire barrier.

“David and I were just close racing trying to get through the esses and it looks like the touch – it looks like my left rear hit his right rear,” he said. “I thought worst case we were just going to bump doors. That’s probably my fault there.”

To join the multi-car accidents, the day also saw some of the strangest moments of the year highlighted by BK Racing’s Matt DiBenedetto getting spun by the safety truck in pit lane and Casey Mears losing his left-rear wheel and axle – sending it rolling into an infield fence but causing no injuries.

The speed and pace of AJ Allmendinger was one thing that was predicted to be tough to beat given his recent success at road-course racing and his quick pole run on Saturday evening.

However, the JTG Daugherty driver had to bring his No. 47 car to the garage to swap out the ECU and the fuel cell before returning to the track 12 laps down. Allmendinger put down laps as fast as Kurt Busch during what the team called a “test session” with no positions up for grabs, but had to settle for 37th spot.

Rounding out the top 10 behind were Dale Earnhardt Jr. in seventh, Kasey Kahne in eighth, Ryan Newman in ninth and Sam Hornish Jr. in 10th, scoring his second top 10 of the year.

Worth mentioning was a strong run by two-time Sonoma winner Tony Stewart who qualified and ran in the top 10 before finishing 12th.

Ricky Stenhouse Jr. used a strategy move to grab 20th, his first top 20 in eight races dating back to a fourth at Bristol in March.