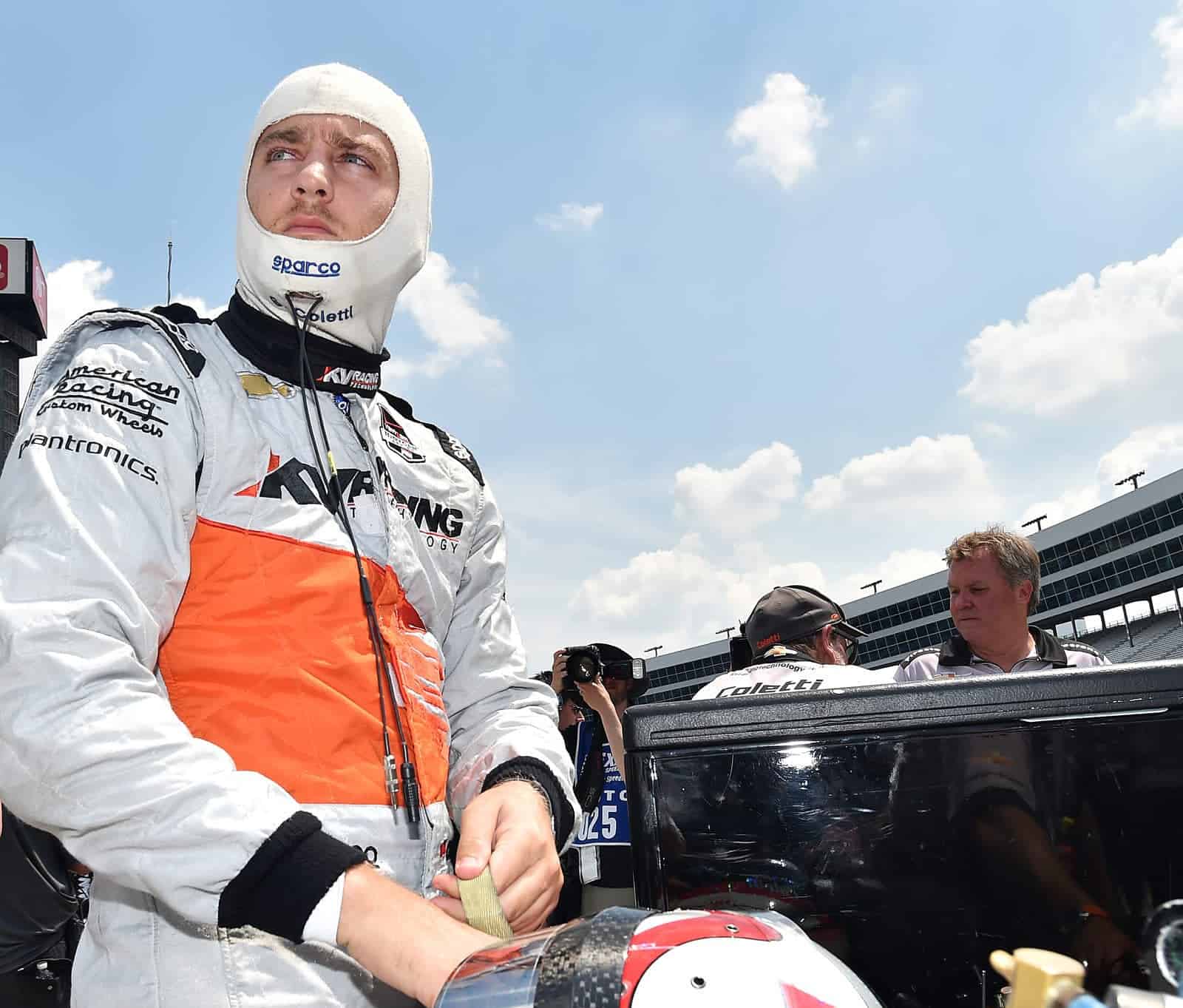 Coletti, 26, entered the season as a relative unknown. While fellow Sunoco Rookie of the Year contenders Gabby Chaves and Sage Karam both had experience with IndyCar – in the form of the onazda Road to Indy – Coletti had never before driven an open-wheel race in America.

Despite his inexperience, the native of Monaco showed promise in the preseason tests for the new aero kits, placing sixth on the charts in the first day of testing at Barber Motorsports Park, one position ahead of teammate Sebastien Bourdais.

Unfortunately, Coletti’s early promise has given way to struggles. An average finish of 18.5 has left the GP2 veteran 20th in points, last of all drivers that’ve ran every race. The rookie has shown speed and glimpses of potential, but he’s still searching for consistency as the IndyCar season begins to wind down.

“It’s been a bit chaotic,” said Coletti in an interview with Frontstretch. “I think we’ve had a lot of bad luck this year unfortunately.

“We’ve always been fast,” the 26-year-old acknowledged. “Our speed has always been there, but there’s always been something happening that… You know, that won’t make us finish in the top 10, when we should be finishing up there every race. It’s a shame, but that’s the way it is this year, and I hope we can change that for the last six races.”

The worst thing about the struggles, according to Coletti, is that the issues have been out of the team’s control.

“I’ve done one driving mistake in the last race in Toronto, when I hit the wall on my own,” admitted Coletti. “But other than that, all of the rest has just been a lot of bad luck, like penalties for nothing, mechanical issues on the car, bad strategies, just a lot of things happening during the races that, most of the time we couldn’t really control.

Coletti, who has only two lead-lap finishes through 10 races, admitted that he hadn’t lived up to his own preseason expectations.

“We knew we were going to be pretty competitive in terms of speed because testing was good, and we’ve shown that we have speed all season, so we were hoping to be in the top 10 of the championship,” said Coletti. “But right now, we’re pretty far from that. But, like I said, things happened out of our control, and it’s a shame, because we should be a lot higher in points than we actually are.”

While Coletti’s struggles as a driver may come as a surprise to some, a closer look at his leap from GP2 to IndyCar can explain many of his issues.

“They’re definitely similar,” Coletti said of the GP2 cars and Indycars. “Both cars have a Dallara chassis, but the IndyCar is a lot heavier, and a lot wider, I would just say a lot bigger than the GP2 car.

“As long as the weather was cold, and the track was cool when we were testing, it was pretty easy to drive,” Coletti noted. “The aggressive driving style that we have in Europe for those (GP2) cars was fitting the Indycar pretty well when it was cold, because you wouldn’t feel the temperature or anything in it. But as soon as the heat came, it started to be more complicated because you can not be as aggressive with this car, because it’s a lot heavier, so there’s a lot of coasting.

“You have to be less aggressive on brakes and try to let the car do more work, and not try to force it,” Coletti continued. “It took me a while to get used to that, but in the end we started to get quick in qualifying, so we’re getting there. You can’t be aggressive at all with those cars, you just have to try to find a balance and let it do the work.”

Outside of adjusting to the cars, Coletti’s biggest learning curve has come from running ovals. While oval tracks are commonplace in America, most series run on road courses in America.

Coletti, who ran his first oval race at Indianapolis, discussed his steep learning curve with ovals.

“Indianapolis was okay, because you had a lot of testing, you had a lot of time on-track before you were actually going into qualifying and racing, but Texas was a bit tough,” admitted Coletti. “Because we had a mechanical issue in practice, we only got a few laps and then we went straight into the race, and Texas was a very hard oval, so it took a long time in the race to get used to everything. In the end, I started to like it, and started to have fun in the last 50 laps. That’s when we started to be quick.

“I think the learning curve is pretty big. Every time I go on track and make a turn I learn a bit more about the car, about the tracks, and I think the ovals are very complicated, very hard, so you need as much track time as you can to try to improve. I think it’s good that we’re doing all of the ovals this year, so if we stay together next year as a team, we can go forward and start with more experience.”

Looking to learn and grow in his rookie year, Coletti has leaned heavily on veteran teammate Bourdais and team co-owner Jimmy Vasser. Bourdais, a four-time CART champion from 2004-2007, joined KV Racing in 2014 after returning from Formula 1. The Frenchman, 36, currently runs sixth in IndyCar points, with an career-best average finish a 9.0 and a win in Detroit.

Vasser, 49, was a 10-time winner in CART, including four wins en-route to the 1996 series championship. The Canoga Park, California native made his last IndyCar start in 2008, finishing 10th at Long Beach.

Coletti admitted to learning heavily from the two veteran drivers.

“They have a lot of experience,” said Coletti. “I’ve spent a lot of time with Sebastien on road courses and asked him for advice, and I’ve asked Jimmy about stuff all year. [Vasser] has a lot of experience on ovals, too. That’s what I don’t know anything about, so it’s good to have people like that around that can explain everything before you get on track.

“Ovals are pretty complicated and hard. You need all of the advice you can get, so it helps to have those kind of people around.”

Most of the attention at KV Racing Technology has gone to Bourdais, but Coletti has shown promise as well. The rookie has qualified as high as eighth (Detroit), and scored a career-best eight-place finish in the Grand Prix of Indianapolis – a better finish than fellow ROTY contenders Chaves or Karam have managed – after a lengthy duel with Tony Kanaan that Coletti called his favorite moment of the 2015 season.

With his teammates running well, and himself showing speed, Coletti remained optimistic about the future.

“You look at Sebastien [Bourdais], and he’s always been up (front), with a lot of top-five finishes. He’s got a win in Detroit,” said Coletti. “When he won race two in Detroit, we should’ve won race one, and then bad strategy happened. It started raining, and we went on a strategy for rain (tires) and it didn’t rain for five laps and we had to stop again and put slicks on again, then stop again to put on rain tires and that made us lose a lap.

“We’ve always been quick, the team has always done a pretty good job on setting up the cars and giving us great cars, but a lot of mistakes have been done, and a lot of bad luck (has happened), and that’s why we’re down there, but I’m sure that the team has done a great job, and I think we can work hard for next year.”

As for this weekend’s race at Auto Club Speedway, Coletti feels that he can show his improvement on ovals and score a good finish.

“We could’ve gotten a good finish in Indy if we didn’t get into the crash in the final laps,” said Coletti. “We worked all day on the car, and in the end, on the last stint the car was very fast, and (sic) good in traffic, so I’m sure we could’ve made up a lot of positions.

“[Fontana’s] a 500-mile long oval race. It’s a long day. The big thing is to try to stay on the lead lap for the whole race, adjust your car a bit on every pit stop and find the right set up, and try to be free for the last couple laps and see where we end up.”