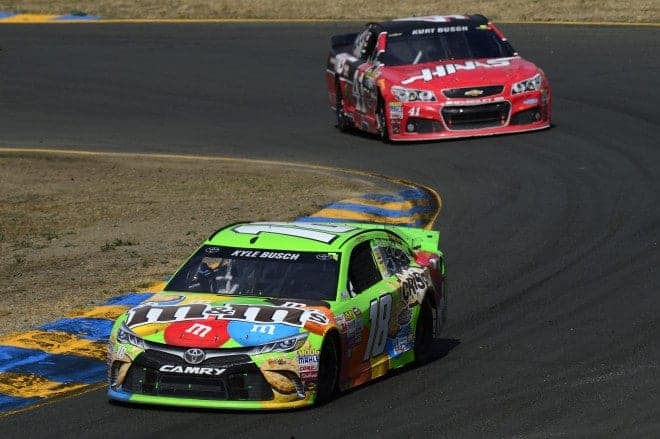 The feel-good story of the week is Kyle Busch getting a much-needed win that may make him eligible for the post-season Chase for the Championship – but with his older brother closing on him in the final laps did anyone believe Kurt Busch wouldn’t have delivered a little ‘Brotherly Shove’ to steal the win?

Sure, Kyle still needs to work his way into the top 30 in points, but one part of that is now out of the way. The win Sunday at Sonoma Raceway definitely turned the crowd in his favor, as nearly everyone was on their feet when he took the checkered flag. In fact, the crowd response indicated a potential turning point in Rowdy’s career, where he may just be going from heel to hero. Time will tell, but it is impossible to deny the fanfare as he was doing his burnout.

At the same time, older brother Kurt said he wanted to race Kyle for the win. With his spot guaranteed in the Chase, were his comments really just the bravado of a fierce competitor? He said he wouldn’t hit him, but how far would Kurt have gone to upset the family apple cart? Since it didn’t happen the answer will remain a mystery.

In his own words, Kurt said he soft-peddled the restart and wasn’t as aggressive as he could have been. It’s doubtful he did it on purpose but the effect was that he had to battle with Clint Bowyer for position and that kept both of them from getting a run on Kyle. Kurt was better than Bowyer and he could have dumped him if he wanted, giving him more time to run down Kyle.

Although Kyle and Kurt may not have the closest brotherly relationship in NASCAR history it was obvious Kurt was genuine when he said he was proud of what Kyle had accomplished. And yet, in the same breath, he said he wanted to battle for the win.

On the flip side, Kyle said he hoped that Kurt would block for him and help him take the checkered flag, but he wasn’t surprised when he was told Kurt said he wanted to race.

“I’m a Taurus, so I’m bullheaded and [a] hard‑nosed competitor, whatever,” Kyle said. “I don’t even know what he is. He’s in August. You would think that he might have a better sense, but that’s fine.  It’s a racer in the both of us, and how we were raised by our dad.

“But really cool to come home one‑two today, especially on a road course. We grew up racing on ovals, but to do that here on a road course, I think that’s just a true testament to our father and everything he’s done for us over the years to get us to the point which we’re at, and to have both Busch brothers be as good as we are and to be winning drivers on the Sprint Cup tour each year is certainly a true testament to our family.”

Whether Kurt really would have tried to force his little brother to make a mistake so he could go for a third win will only be known by him, but he isn’t the same bad boy racer he was in the past. Kurt Busch’s transformation has been one of the most positive takeaways of the 2015 season and his comments on Kyle’s win showed true class.

Kyle reached out to Kurt during his problems this past year. I say Kurt had Clint driving with his eyes on the rearview mirror more than forward which helped Kyle win. I also believe Kurt had every intention of allowing his brother to win this race and help his chase chances. Did you see the sly smile on Kurt in victory lane when he congratulated Kyle. lol Class on both their parts and Kurt has even kept the reporters guessing.

He won’t be that nice to him come chase time but I doubt Kurt would have tried for the win.