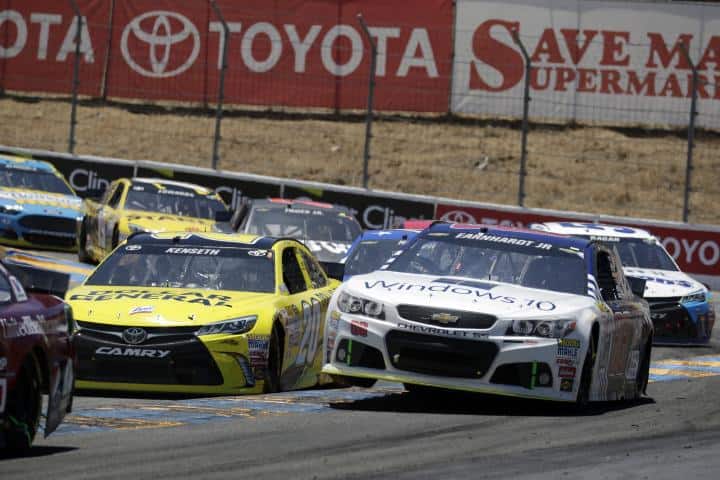 The result wasn’t quite there, but the old fire was. Tony Stewart posted his best finish since Bristol and second-best for 2015 on Sunday, and for the first in a long time, it looked like he was having fun. Stewart put on a vintage performance, driving with confidence, and holding off all comers with the skill that once made him one of NASCAR’s most feared road racers. Stewart admitted earlier in the weekend that he had lost confidence in himself, but he took some back this week, asserting himself as a formidable opponent. Stewart is entering what has usually been the best part of the season for him as the series heads to Daytona where he has four wins in the summer race. Is it time for the real Stewart to step forward at last?

The weather was perfect for racing, and so was the track… but road racing is a special skill that not all drivers have, while others have it in spades. It’s a matter of experience, but raw talent and skill also go a long way in determining who’s going to come out on top.

Road courses do showcase some drivers who you might not look at twice on an intermediate oval. Small team drivers AJ Allmendinger, Casey Mears and Michael McDowell are all aces at turning right and left. Jamie McMurray is unexpectedly strong at Sonoma. Kurt Busch, granted, is good anywhere (he might just be NASCAR’s most underrated driver), but he’s a pleasure to watch tackling Sonoma. Road-course specialists may be a dying breed, but Alex Kennedy and Boris Said put up their teams’ best finishes of 2015 this week. Jimmie Johnson, who has looked like a fish out of water on the road courses at times, put up a textbook performance. There were surprises on Sunday… and it’s rare that NASCAR offers up many surprises these days.

The race featured a type of driving that’s all but absent at many tracks these days: old-school, hard-nosed racing where aggression is barely controlled and drivers are willing to take chances. Pit strategy varies widely and doing something different isn’t an instant death sentence. Cars come away with tire donuts on the doors, bent fenders, and drivers with hot tempers. In short, the road courses, once a bit of a red-headed stepchild in NASCAR, have become some of the best tracks the sport has to offer. Really, there should be four of them on the schedule, including one in the Chase.

Allmendinger looked headed for at least a top-five finish on Sunday until a fuel system failure sent the polesitter to the garage for repairs. His team was able to fix the problem, but it took 12 laps to do so, turning what should have been a sweet day for Allmendinger and company into a sour one by the time Allmendinger got back on track and wheeled it home in 37th.

Carl Edwards was having a solid day, running inside the top 15 for most of the day until he slid sideways into David Ragan 80 laps in and the two went for a spin. It wasn’t Edwards’s fault, nor was it Ragan’s—it was the type of hard, aggressive racing the series needs to see more often, but that kind of racing comes with a price, and it cost Edwards to the tune of 40th place this week.

Several teams found trouble in Wine Country this week. David Gilliland zigged where hs should have zagged and hit the tire barriers hard, ending up with a car on fire and in last place for his trouble. Martin Truex Jr. had a shot at leaving with the points lead, but instead left in a hole, slamming a tire and Jersey barrier and bringing out a red flag at lap 31 to fix it after contact with Ragan that Truex felt was intentional — and it certainly looked like retaliation for Truex getting into Ragan’s side earlier.

Matt Kenseth had a tire disintegrate on lap 45. Justin Allgaier ran out of fuel on lap 66. JJ Yeley was the track’s next victim, slipping off the track in turn 10 and overcorrecting, spinning back across into the tire barrier. Ragan and Edwards got together in the same turn where Ragan wrecked Truex, ending with both the No. 55 and No. 19 in the wall.

The weirdest incident of the day went to Mears, who’s rear-end axle housing broke, sending his left-rear wheel, axle intact, rolling across the track. Danica Patrick went for a ride through the grass but was able to get back on track without the help of a yellow flag. Sonoma was not just a Sunday drive for anyone.

Busch should definitely be putting Clint Bowyer on his Christmas card list this year, because Bowyer held up Kurt Busch, who had the best car on the track, just long enough to keep Kurt from running down Kyle. And that was all it took for Busch to take the victory. Had Kurt gotten through one lap sooner, it’s very likely that the outcome would have been different.

For most teams, a win means near-automatic inclusion in the Chase. But for Busch, it’s not so simple; he’s still 136 points behind the 30th-place cutoff with 10 races to go. On paper, Busch should be able to beat Cole Whitt by an average of 13 spots a race, but even after his Sonoma win, his average finish is just 7.5 spots ahead of Whitt’s. Another reality is that it’s rarely that easy in racing; particularly with Daytona on the horizon, where the Big One lurks and can ruin anyone’s race. Can Busch make it to the playoffs? Certainly? Will he? Maybe.

Note: I’m trying something a little different this week, highlighting the top three teams in this group while putting each and every one of the small teams in a handy chart. Like it? Hate it? Let me know in the comments section.

Whitt; Front Row Motorsports: Whitt has been quietly impressive in his still-young Cup career, driving mostly underfunded equipment. On a weekend that should have been all about the three Richard Childress Racing auxiliary teams, the Nos. 13, 47 and 37 in this group, it was Whitt who avoided trouble and finished at the top of his class this week. It’s now Whitt who Kyle Busch needs to pass for 30th in points to make the Chase, and it looks like Whitt isn’t going to make it easy.

Kennedy; Circle Sport: Kennedy has been known as a road-course specialist and he showed why on Sunday, putting up a strong performance in what might be the most underfunded car in the garage. His 25th-place finish is his career best and the team’s best of 2015 without an RCR driver at the wheel (and the attached funding) He’s also learning to race on ovals this season. At just 23, he’s got some time to learn.

Said; GO FAS Racing: Probably the best-known of the road-course ringers to race in Cup regularly over the years, Said is a part-owner of the No. 32 and races sparingly. His 26th-place run is the team’s best since Watkins Glen last year, but don’t expect a long-term turnaround for this team without more sponsor dollars.