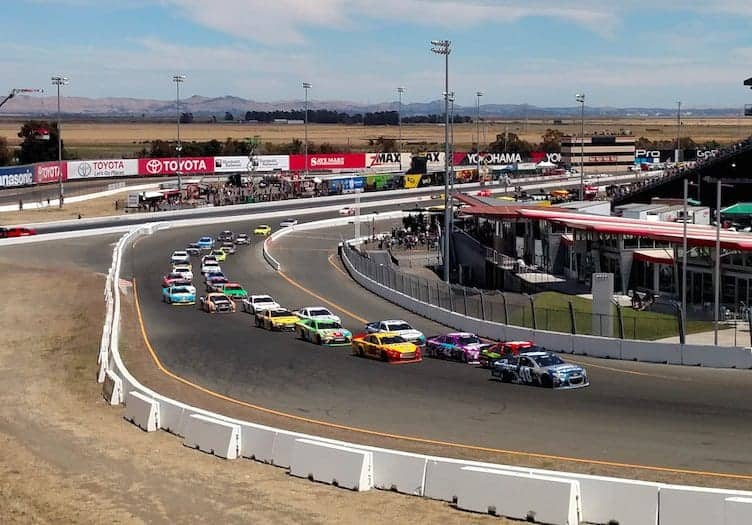 ONE: See you next year, FOX

I was at the race on Sunday – more on that below – so thankfully I didn’t have to watch to the final FOX broadcast of the year. I’m sure there were a plethora of maudlin elements and no doubt some crocodile tears as FOX wrapped up their broadcast responsibilities at the Cup level after 16 races of the 2015 campaign. A few weeks back I wrote about how much I was going to miss the TNT coverage, so I for one am glad that we’re done with FOX – at least at the Cup level – until next season and the 2016 Daytona 500.

All eyes now turn to NBC as they make their return to NASCAR broadcasting starting this weekend on the high banks of Daytona. It will, then, be fascinating to watch the approach they take to Cup racing over the next five months. There’s clearly great excitement on the part of the venerable old network, so I’m very much expecting a polished, impressive and hopefully innovative approach to race broadcasting. As with FOX and FOX Sports One, NBC will run 13 of the 19 races on their NBC Sports Network as they look to build that property. For anyone who’s watched NBC Sports excellent coverage of IndyCar or soccer, there’s good reason to be optimistic about what’s to come. Watch this space, folks.

TWO: The Race to the Chase

When I first started working in NASCAR, this next ten weeks of racing was known as “The Race to the Chase.” It was, of course, a ridiculous made-up “marketing” type term that thankfully appears to be out of use now. But the fact remains that we are 10 races away from the 10-race Chase. For those not locked in yet, most notably Kyle Busch, this next 10 weeks is a crucial period in which seasons can be made and seasons broken. Jeff Gordon is a driver at the top of this list as well.

“It’s not about making the Chase, it’s about being a factor in the Chase,” said Gordon in an interview with ESPN.com. “While there is meaning to being in it, we want to be more than just in it. So we’ve got some improving to do. We know that. We’re working on it.”

And in that regard, Gordon is right. Sure, for a driver like AJ Allmendinger or Aric Almirola just making the Chase is reward enough. But a four-time, 92-win champion needs to do much more than just make the playoff field. At this stage, even if Gordon does make it in, either via wins or via points, he doesn’t look like he’ll be a threat to win it all. That being said, this new format certainly gives him a better chance than his form suggests if he can lock down his Chase berth. One way or another these next 10 weeks, dreams will be made and dreams will be crushed. For the likes of Jeff Gordon the hope is very much the former and not the latter.

As I mentioned above, I had the chance to attend the race this weekend at Sonoma Raceway, which is now my home track after I moved from New York to San Francisco last year. A road course, as you would probably expect, is a completely different kind of NASCAR race experience than the ovals, but as with any race you attend it’s definitely a good time not least because this is one race you can guarantee you won’t get a rain out. Set in the beautiful Sonoma countryside, nestled in the golden California hills, the track seems almost to appear from nowhere, but once you get there you’re glad that you did. Having split my 15 years in the U.S. between New York and San Francisco, it’s fair to say that I’ve not really ever lived in a true hotbed of NASCAR, so getting out to the track is a way for me to truly connect with my – our – tribe. As with other races I’ve attended NASCAR fans are a fun, knowledgeable crowd, always willing to strike up conversation, and ready with all manner of quips and witty asides not to mention a fair share of banter around favorite driver. If you do get the chance, definitely make the trip out to the track – you won’t regret it.

In a sure sign as to how much Michael Waltrip Racing has struggled in 2015, Clint Bowyer’s third-place finish this past Sunday was the first top-five run for the team this year. And I really only have one word for that and it’s “wow.” Admittedly, it’s been a tough year for MWR – it’s been a tough couple years to be fair – with Brian Vickers having to step out of a ride due to health issues. But with David Ragan now behind the wheel of the Aaron’s Dream Machine, they at least have a trusted veteran for Bowyer to work with. Despite Bowyer’s, and the team’s, relative lack of success, the Emporia, Kansas native sits just one point out of 16th place and that all-important Chase berth.

“This is where we need to be running,” said Bowyer in a MWR release after Sunday’s race. “We need to be able to go to these regular race tracks and keep this momentum and confidence level up that we have when we come out here.”

I talked a little bit above about the need for Gordon to make waves if he makes the Chase, but in the case of Bowyer just making the Chase this year would be a fantastic feat. Here’s hoping one of the sport’s good guys can find a way to get it done.

FIVE: Next Up – Daytona

It’s back to Daytona International Speedway this Sunday evening for the second of two races – and the 137th in total – at the venerable old 2.5-mile track. One of the quote-unquote “wild card” races on the pre-Chase schedule, Sunday night’s 400-miler is a huge opportunity for an unexpected driver to grab a Chase berth. In fact two members of the field, Greg Biffle in 2003 and Ragan in 2011, won their first Cup races in the July event at Daytona. Following Kyle Busch’s untimely injuries in the Xfinity Series race, the management at the track promised changes to promote safety so it will be good to have said alterations in play for this weekend: Restrictor-plate racing is inherently dangerous enough as it is, let’s not forget. Only five drivers have swept both races in a season at Daytona – Fireball Roberts (1962), Cale Yarborough (1968), LeeRoy Yarbrough (1969), Bobby Allison (1982) and Jimmie Johnson in 2013 – so if Joey Logano can win, he’ll be joining some pretty elite company. Love it or hate it, restrictor-plate racing is compelling viewing, particularly the last few laps, and that should be the case once again this Sunday night. Looking forward to it.

I am so relieved that I don’t have to turn down the sound, watching a silent race rather than listen to the Waltrip babble! That is the best part of reaching Daytona again!

I can’t really say why but I have a feeling this weekend may see a Ganassi driver snag a win. Just a hunch…

“I miss Michael already.” said NO ONE.

that is certainly MY point of view, too.

After watching NBC cover the Indy race from Fontana last week end, it appears it will be same old TV directing
techniques. No one can cover a starting lap without going to an in-car or ground shot and then start zooming
in and out. NBC had repeats of the 2003 and 04 Homestead races last night. Parsons, Bestwick, and Dallenbach at their best and the director showing high wide shots instead of one car ads.
NA$CAR has mentioned perhaps of franchising teams. Gambling at it’s highest level. Pay a fee and try to win a
“valuable prize”.

GinaV24
Reply to  Fed Up

Yes I don’t know why all the directors for racing have to play with the tv toys all the time. Wide shots are so much more valuable for the fans at home to see the actual racing and darn it, go thru the whole field, not just cover a few cars. Single car shots, with ads on the other split screen, are useless.

Fox as usual screws up everything. Worst TV coverage, sound is worst. Now they get rid of Larry Mac and keep D.W. boogity boogity idolizing his brother’s crappy race team. Wake up Fox. Put Jeff Gordon with Larry and Mike in the booth. Get stand up comedian,Idiot, Michael out of Hollywood Hotel so we don’t have to listen to him tell us how great his team is, when actually it really sucks. Put Andy Petree with Chris Myers in the hotel. Then we will have an informative show. But there is no way Fox management is nearly that intelligent.