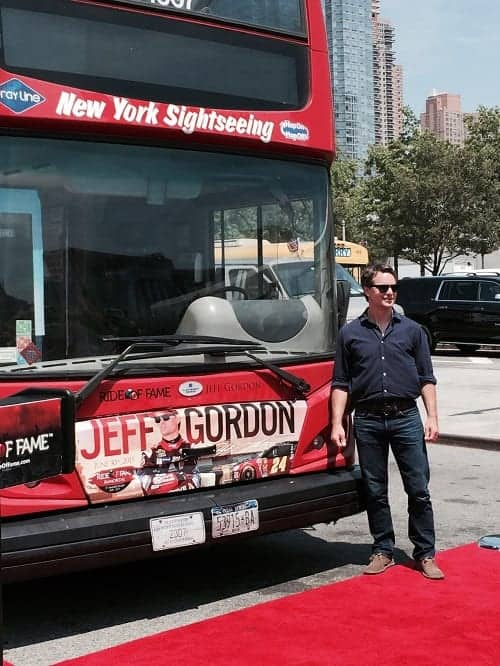 New York City is known for its bright lights and tourism industry. On Tuesday afternoon, a special Gray Line tour bus glowed with images of a NASCAR champion.

Positioned just two blocks from the infamous Intrepid Sea, Air & Space Museum on the West Side Highway by the Hudson River, a red carpet was rolled out for another step in Jeff Gordon‘s retirement tour. After making an early morning stop at CBS This Morning to release a throwback rainbow paint scheme, the Hendrick Motorsports driver was honored by the Ride of Fame – a program created to glorify public figure’s impact on the world, showcasing their accomplishments amidst New York City.

“My kids were born in New York City,” Gordon said prior to unveiling the tour bus. “I met my wife in New York City. We spend a lot of time here and love the city. We have seen many double-decker buses driving around, and I know how much people that travel from all around the world enjoy these rides. I hope they enjoy this one just a little bit more.”

With a gold-plated scissor, Gordon cut the ribbon to release to the world a bus with his No. 24 Chevrolet on the face of it. As his son, Leo, along with daughter, Ella Sofia, ran around the bus, he called it a “play pen for my kids.”

Dedicated in the 92-time Cup Series winner’s honor, the bus has two special seats with his name on it, along with a special message for those that will have the pleasure of sitting there.

“I prefer not to have my face on there,” he joked. “Typically, I like my racecar or my number and my name, but this is a true honor. I got a chance to write a little message to the riders. I told them that ‘I know it’s not 200 mph, but enjoy the ride.’ I just hope people enjoy riding it.”

“It’s just so cool,” Gordon said. “I’ve lived here part-time. I’ve seen these Gray Line buses all around the city, and to have my face, name and racecar on the front of this bus and a couple of special seats with that same thing is so cool for me.”

Gordon, who is retiring from full-time competition at the completion of the 2015 season, will be joining the NASCAR on FOX booth beginning in 2016 as a race analyst. This season, he has two top fives and eight top 10s after 16 events.

Kevin Harvick on What He Learned Doing the Drivers Only Race Broadcast at Charlotte
YouTube Video VVVkeXhzNzJmRnF5MmZVZ2FoMi1fQkd3LkR1V2Jwb3cxc0Nr
Load More... Subscribe
Sign up for the Frontstretch Newsletter