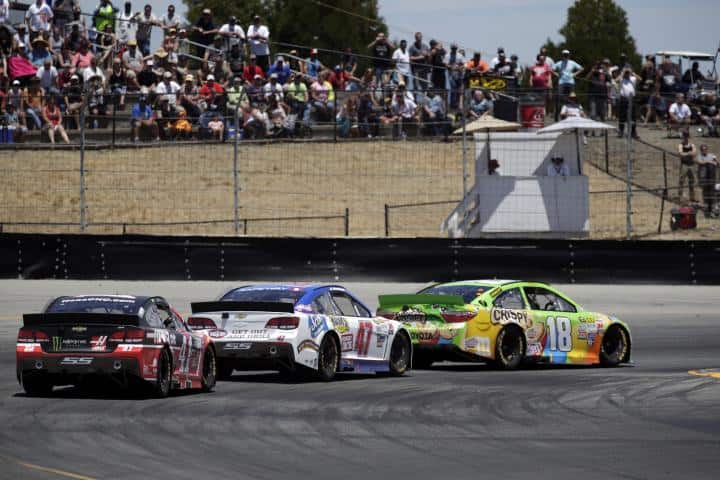 The first of the two road-course stops took place this weekend for the Sprint Cup series and as has been the case the last few years, it provided some of the best and closest racing we see during the whole season. It also provided us with a couple of hot tempers, so it’s all part of Who’s Hot and Who’s Not this week.

Kyle Busch finally got to do a burnout after a Sprint Cup race in 2015 and it was a big deal in a lot of ways for the driver of the No. 18 car for Joe Gibbs Racing. Unlike the case with pretty much the rest of the Sprint Cup regulars, a win does not guarantee Busch a spot in the Chase. It’s just the first step. After missing the first 11 races of the season due to leg and ankle injuries suffered in the season-opening Xfinity Series race at Daytona, Busch now has to climb his way into the top 30 in points to make the Chase. Of course, winning helps that cause, but still with 10 races remaining, he is 136 points behind 30th-place Cole Whitt. What was just as remarkable about this win for Busch, is that with all of the pedal work needing to be done on the road course, and that his injuries were to his lower leg and ankle, he not only had the endurance to last the entire race, but was strong enough to make two late passes to get the lead. There’s no doubt that Busch is all the way back from his injuries now. The question is whether he can come all the way back to make the Chase. That will be one of the more interesting races to watch in the coming weeks.

Another interesting part of Sunday’s race was to watch Kurt Busch drive through the pack on the final eight laps. He came out in ninth position after the final round of pit stops, and in most cases, moving up three or four positions in those final laps would be considered a good run. But Busch angled, dirt-tracked (I mean literally here, too) and, at least once, gently bumped his way forward and if he had a couple of more laps, he likely would have won. And while he couldn’t quite get to his brother’s bumper on the final couple of laps, you have to wonder if he would have given his brother one of those gentle taps in order to win. Well, probably so, and you know, if it comes to winning a race on a road course, it would be hard to blame if he would have. Who knows? Maybe that scenario will play out at the other road-course race at Watkins Glen in August.

It’s almost inevitable to happen on a road course, but it seemed David Ragan was a marked man on this day. So, while that was bad news for Ragan and also for Martin Truex Jr. and Carl Edwards, the reactions made for some good entertainment value. Ragan claimed he was run off the course by Truex (replay seems to indicate he was correct) and then Truex claimed that Ragan turned him around on purpose. Ragan claimed he was just trying to get back on the track and that Truex just happened to be in that spot. While that ended Truex’s hopes of a good day, Ragan’s day ended when Edwards tried to a cut a corner to make a pass, but then ended up bouncing off the elevated corner curb and right into Ragan, ending both of their days. Give Edwards a little credit for taking responsibility for his part in the accident.

Not that there’s any reason for Kevin Harvick and the No. 4 team to panic as he did finish fourth Sunday, but after such a hot start that included two wins, and also being so consistent this season, they are probably ready to win a race again. Harvick still sits atop the points and has 14 top-10 finishes in the 16 races. But he hasn’t won since March 15 at Phoenix and you know, when you’re so close to the front all the time but not winning, that can be a bit frustrating.

Not much has gone right for Tony Stewart this season. OK, pretty nothing has gone right for the three-time champion. So, when he had a chance for his first top-five finish of the season, and most definitely would have had a top 10, a poor 18-second pit stop put him in 16th to start the final eight laps. As Stewart alluded on his radio, the ability for the No. 14 team to get anything right just doesn’t seem to be there. He did manage a 12th-place, which isn’t bad for him this season, but even at that, he sits 26th in points with his best chance to win and make the Chase mostly likely coming next Sunday night at Daytona.

Casey Mears seemed to be in line for a decent finish when he was running 15th late in the race, only to have his rear axle come unattached. It was one of the more rare mechanical failures to see in a race. Luckily, this happened without any other cars around him and on a remote part of the track where there were no stands leaving the wheel and attached half of the axle to roll harmlessly off the track and into the fence. It also left Mears with a 38th-place finish.

AJ Allmendinger saw one his two best chances to make the Chase go up in smoke when he had an engine failure Sunday that relegated him to a 37th-place finish. Allmendinger certainly was a contender to win when things started going bad for him. So, what he and everyone else knows is that barring an big upset at another track, his next chance to win and return to the Chase will be at Watkins Glen in August. At least everyone knows he will be going for it there and the bumper may just turned out to be his best chance and best friend there.

This wasn’t so much a cold thing, but more of an oops thing for a spotter. When JJ Yeley spun in turn 10, his spotter alerted him to watch out for a car that had spun in that turn. Now, granted road courses are the hardest to see on, but you had to laugh a bit when Yeley responded, with “that would be us.”