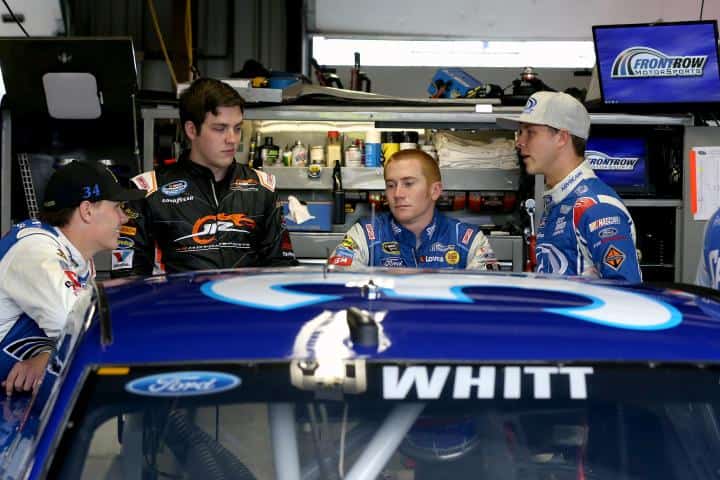 It’s been quite the journey to NASCAR’s premier division for Cole Whitt. The talented driver started out as a developmental driver for the now-defunct Red Bull Racing, rising through the rankings after impressive stints in the K&N Pro Series East and Camping World Truck Series. After the team shut down, he was left searching for a job. Landing at JR Motorsports in 2012, the California native’s career took off, finishing seventh in the championship standings in his rookie year.

For the early part of 2013, he didn’t have a ride. He found a job at TriStar Motorsports in the Xfinity Series, and had an impressive four top 10s in 15 starts, and still holds the team record for top 10s in a single season. The effort was enough to impress Brandon Davis, owner of Swan Racing. He signed Whitt to a multi-race deal at the conclusion of 2013, along with what was supposed to be a full-time partnership in 2014 as a teammate to Parker Kligerman.

However, when Swan Racing shut down, he was left searching again. With the help of investor Anthony Marlowe, Whitt signed with BK Racing, and finished the year 31st in points. During the off-season, he split with BK Racing and signed with Front Row Motorsports to pilot the No. 35 Ford for the organization in his sophomore year in the Cup Series. Thus far into his stint with the team, he sits 30th in the standings, finishing in the top 30 10 times, which nearly equates his mark of 11 after 16 races last year.

In this exclusive interview with Frontstretch, Whitt discusses his season with Front Row Motorsports, why he left BKR, what the future holds for FRM and he, along with his life outside of the racetrack as one of the fittest drivers in the NASCAR garage area.

Joseph Wolkin, Frontstretch: What has the transition been like for you to Front Row Motorsports?

Cole Whitt: “It has been pretty good. We started out pretty strong I felt like. Lately, we have been a little less consistent. I wish we had a little more speed when we show up to the track. It is all a learning curve. This part of the year gets long and hard, and everyone is trying to get things turned around. Having three cars is different for the team, so we just need to do a little bit of a better job preparing when we come to the tracks.”

Wolkin: With everything that has gone on internally with the team, how do you make sure you guys don’t focus on what everyone else within the organization is doing?

Whitt: “It is a little bit of a distraction because it takes a little bit of time from us being able to prepare just because the guys in the shop are trying to get everything together. We can hopefully put that behind us and focus on what we have now. All in all, they had to do what they had to do, and it seems like it is working out just fine.”

Wolkin: What’s the most difficult part about driving for a smaller team?

Whitt: “I think the biggest thing is just lacking on the simulation-type stuff and manufacturer support. We don’t have all of the big simulation-type rigs like the seven-post shaker and all of that kind of stuff that we can use at our disposal. Everything that we try has to happen right here at the racetrack. These guys show up with exactly what they want and fine tune it, where we are trying to just figure out where we want to be. They are a couple of steps ahead of us, and it makes things a little bit tougher.”

Wolkin: Randy Cox is your crew chief once again. How has your communication improved with him?

Whitt: “Randy and I have worked together for a while. We have always had a good level of communication. We usually race a lot better than we practice thankfully because we practice and qualify pretty bad sometimes. Luckily, we tend to put it together in the race.”

Wolkin: What made you want to make the switch from BK Racing to Front Row Motorsports, especially since team owner Ron Devine really wanted you to stay?

Whitt: “Ron was great and it was a good opportunity for me to perform with one of the smaller teams. It wasn’t really good timing with what was happening over there. Ron was behind on his payment stuff with some guys, and I really don’t like people that do business that way. You are trying to represent somebody well, and you are what you bring to the track and what you have plastered on your shirts and cars.

“When everyone is sitting there going ‘hey, you know the guy owes me money’ or something like that, I don’t want anything to do with that. I’m just trying to race. At the end of the day, Ron still took great care of me and allowed me to do what I did. I’m still grateful for the opportunity. I always told him that if he got his motor program together, it would be pretty good. They got Triad’s now, and they are running pretty well, so I’m happy for him. I kind of wish they made that move when I was there. It is what it is, and it wasn’t the right situation for us. It just seemed to be like a good fit over here.”

Wolkin: What does this team need to improve on moving forward?

Whitt: “I look forward to being here for a while. It’s been a great team and I really like the owner [Bob Jenkins]. We are stretching a little thin being a three-car team right now, but we’ll see where the future plans go.”

Wolkin: Have you had any talks about returning to the team?

Whitt: “The plan was always to try to be here for a while. We have a single-year contract with an optional second year, so I hope it all works out and comes together because I really like the place and the people. I would like to help build the team into something down the road.”

Wolkin: With the potential to continue on with the success that you’ve had early on in your career, how do you see it expanding? Do you want to stay with FRM or move on with one of the larger teams down the road?

Whitt: “I’m cool with being a leader on a smaller team. I really like that, but at the same time, I was my leadership role was a little more established. Maybe I can just do a better job at that myself. I probably need to take on a little bit of a better role with that. Like I said, the three teams are kind of getting spread out. Everybody is kind of doing their own thing. There is a lot of competition in it. We need to work together to make ourselves all better. I think the guys are scared to go from a three-car team, so nobody wants to get cut. They don’t talk about even doing that, so I don’t know why anybody is even worried about it. It is just something that is typical competition in our garage.”

Wolkin: How do you feel like you can make the communication better among the teams?

Whitt: “I think I can be a better leader. I want to spend more time with my crew chief and my team. More than anything, it is the attitude that you have when you show up. If you don’t show them the right attitude, people can tell by your demeanor of where your mind is at. Whether you say it or not, people know what you are thinking. We need to have the right mindset coming into the weekend, being positive and just showing the guys that we might be struggling, but we are going to work and we can make it better.”

Wolkin: You do a lot of CrossFit. What goes into that?

Whitt: “I just like different styles of training. I get bored with the typical gym routine. CrossFit keeps it different every time that you go in. At the same time, it is the hardest thing that I can think of. It makes racing easier for me.”

Wolkin: How often do you go to the gym?

Whitt: “I go to my gym twice a week and then I do small little stuff – I call it active recovery. It’s just stuff to move around and kind of get the muscles moving and stuff like that.”

Wolkin: How does working out help you behind the wheel?

Whitt: “It helps out a lot. That’s the biggest thing to me. It’s just trying to make the racing that much easier. Dover was a hard race for us. I had car strain issues, and I’m really glad I worked out as much as I did. I felt like I was dead. Luckily, it seemed to help me out a little bit.”

Long day at the monster mile today. Makes it really really long when the power steering is on and off through the corners… Glad it's over

Wolkin: What else do you do to get in shape besides that? Is there something you do mentally to prepare for each weekend?

Whitt: “I try to focus on what I learned from last year. I try to put that to use this year. We’re just constantly trying to sharpen our whole tool to try to be better every time we come back to a track. Last year was a learning process, and hopefully, this year I can come back and put some of it to good use.”

Wolkin: With a blank car at a few races this year, how hard is it to find funding?

Whitt: “Funding is definitely big, and it’s hard. It would be huge if we can lock down one sponsor to fund us for the whole year. It doesn’t help us that the sport is so expensive. The guys have to spend a lot of money to be a part of it. We don’t ask for as much as these big teams, but still, the sport costs a lot. I know Bob does a lot out of his own pocket, so I’m just thankful we have a good owner that takes care of us. I don’t think it really changes our performance a whole lot, though.”

Wolkin: How do you try to expand your marketability with these potential sponsors?

Wolkin: There’s a lot of talk around the garage about how to change the aero package. What would you like to see changed?

Whitt: “To me, I want it to be like the old days where the cars hop off the ground. I feel like we kind of turned into like an IndyCar Series it feels like. The cars are really low and they are really aero-dependent. I wish we can bring back the mechanical side into it. You never unlearn speed is the problem. Aero is so important, so as long as we are going this fast and going to these big tracks, you just know where time is.”