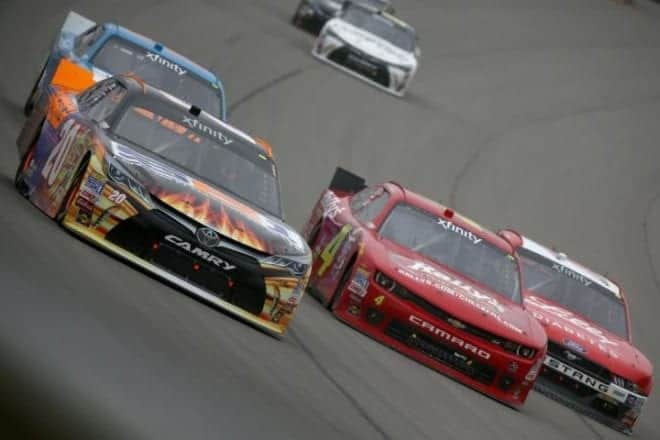 The NASCAR Xfinity Series is set to embark on its final restrictor-plate race of the season this weekend at Daytona International Speedway. With so many unknowns at plate events due to the style of racing, it’s the perfect time to deliver a breakdown of how the rookies have done this season.

Though it isn’t officially the halfway mark of the season (Daytona will be the 15th of 33 races), I thought it would be nice to give you guys a breakdown of how the young guns are doing before I take a 12-day break while I go to Israel.

Note: Included in this list are drivers that aren’t officially listed as rookies, but are running their first season in the Xfinity Series.

Wallace has been incredibly strong for Roush Fenway Racing this year. The 21-year-old has seen some inconsistency, like most rookie drivers do, but there have been plenty of bright spots for him. He ran up front throughout the day at Fontana, finishing 12th after he fell back late in the going.

One regret, not giving the praise my guys deserved for a badass car they put together today after the race. Our time is coming. #oneteam #6

Dover proved that he is capable of winning a race. The No. 6 car led a season-high 52 laps until he was hit by teammate and championship leader Chris Buescher after starting on the pole for the first time this year. After a few rough races, he is back on the right track as he finished 10th at Chicagoland and is looking to continue the momentum heading into Daytona, where he finished 12th to begin the season.

Ever since his runner-up finish at Bristol, Suarez has stepped up his game. The No. 18 Toyota has been competitive each week, running inside of the top 10 at most races. However, bad luck and rookie mistakes have plagued this team. He had a speeding penalty while having a solid run at Dover, and he struggled at Iowa and Michigan, which have hurt him.

As he moves forward, the Mexico native is growing increasingly competitive at the intermediate tracks, with an average finish of 11th. Running the majority of the Truck Series schedule has helped Suarez settle into the Xfinity Series, and should move up from his 10th-place spot in the championship standings as the season rolls on.

The watermelon mobile has done rather well considering the circumstances surrounding the team. JD Motorsports expanded to three cars from two this year, and it has two drivers inside of the top 20 in points. Chastain is one of them, and his No. 4 team is starting to show what it is made of.

He has finished in the top 20 in six races this year, which has him 15th in points. Sponsorship has been tough to come by for this squad, yet with the limited resources the team has, Chastain has done a respectable job at making this car competitive. There are a few races where this team can get top 10s, and if they can capitalize, he has potential to get near the top 10 in the championship standings.

Conley isn’t exactly in the best of situations. He moved from Richard Childress Racing, where he was competing for top 10s on a part-time basis last year to running in the back half of the field with TriStar Motorsports in 2015. His average starting position and finish are each 25.9 entering Daytona, which has put him barely inside of the top 20 in points.

Running full-time should benefit him in the second half of the season, returning to tracks that he struggled at to begin the season as he was adjusting to the underfunded team. The No. 14 car has four top 20s this year, with a best finish of 16th at Fontana. If everything can go smoothly from here on out, Conley should compete for top 20s on a weekly basis. He needs to run well, especially since he has potential to move up with a larger organization as he attracts more incoming sponsors.

Since a DNQ at the season-0pener in Daytona, Rhodes has struggled with JD Motorsports. A good weekend for him is barely inside of the top 25. Yes, this is the third car that the team added on for this season, but three straight weeks of mechanical issues really hurt the team.

You can’t really sugarcoat a 28.2 average finish. The only positive about Rhodes’ season is he is running full-time, which gives him a great opportunity to showcase what he can do in underfunded equipment. Obviously, his struggles are due to things out of his control, such as those mechanical problems. If he can run near the top 20 like he did at Richmond and Michigan, sponsors will start to come on board, and his performance will undoubtedly increase.

Hired four races into the season, Sellers has settled into his role with Obaika Racing. Since Talladega, he has finished no worse than 28th. Adding a sponsor has helped this team, but it has plenty of room to grow.

It took way too long for Poole to get an opportunity in a top-tier ride in NASCAR competition. There have been a few rough races for him, such as Iowa, where he was involved in a controversial incident with JJ Yeley. However, with five top 15s in nine starts, he has done rather well.

Remember, he is splitting the No. 42 ride with Kyle Larson, who has four top 10s in five races. Larson’s success puts more pressure on Poole to excel. But for someone that hasn’t raced anything other than an ARCA car until this year, he is settling in rather nicely. With an average finish of 18.6, there is room for improvement, and it will come as he continues to adjust to tracks that he has never been to. Oh, and his girlfriend was recently named Miss New Jersey, so he should be pretty happy with how his year is going.

He’s only raced two events for JR Motorsports, but Rhodes has done decent. He finished inside the top 10 in his debut at Iowa, which saw him run around 15th for the majority of the event until a late-race pit call helped him finish seventh. At Chicagoland, he struggled throughout the race, finishing 21st, which shows he still has a lot to learn. Fortunately, the 18-year-old has plenty of time for that education, and he should be in the top 15 on a consistent basis for the rest of his races this year.