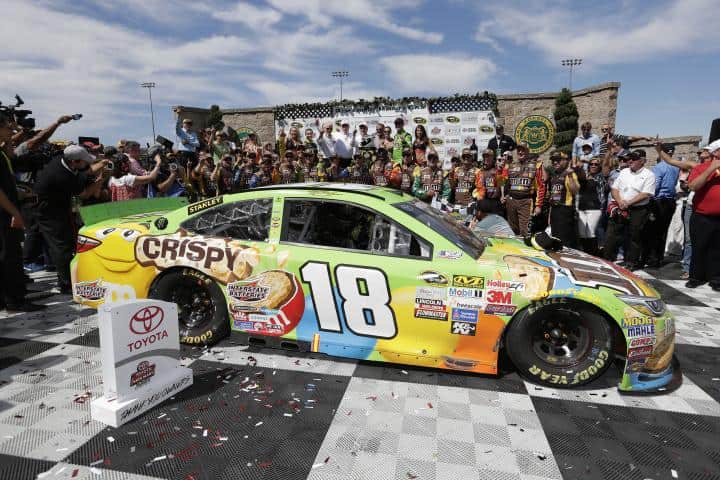 Love it or hate it.

For years, most NASCAR fans have fallen into one of these two camps when it comes to road course racing on the Sprint Cup Series schedule. After this past weekend’s action at Sonoma Raceway, opinions may have changed for the better. There was some great racing, complete with nine lead changes by five different drivers, at the 1.99-mile road course in Northern California’s wine country.

And speaking of love it or hate it, seeing Kyle Busch, who is normally a very polarizing figure, take the checkered flag after all he’s endured this season with the massive injury to his leg and ankle in Daytona, was really special. As Kyle’s wife, Samantha told USA Today’s Jeff Gluck on Sunday after the victory at Sonoma, “It’s his biggest win… Just seeing him in Daytona with that bone sticking out and not knowing if he’d ever race again, it’s overwhelming.”

This weekend we head back to the the shores of Daytona Beach for the Coke Zero 400. The first of the 2015 NASCAR telecasts for NBC Sports, which rejoins the sport after taking a nine-year hiatus, will stock the broadcast booth with veteran racing voice, Rick Allen, former driver and 21-race winner, Jeff Burton and the former crew chief Steve Letarte. Last year’s top 10 included such names as: Brian Vickers, Casey Mears, Michael McDowell, Austin Dillon, Danica Patrick, Marcos Ambrose and race winner Aric Almirola. A crazy race, with plenty of lead changes, and the Big One late in the race certainly made for a most unlikely finish, adding to the old adage that anything can happen at superspeedways.

It should be a great Fourth of July weekend for racing, family and friends.

Onto this week’s Mailbox questions from you, our readers…

Q: Hey Greg. I’m a big Kyle Busch fan, and thrilled about his win this weekend out in Sonoma, but also still really worried about Kyle’s chances of making one of those Chase slots. Given what happened to him at Daytona in February, what do you think about his chances on making it to the Chase for the Cup this year? Thanks! – Herb B., Cold Spring, N.Y.

A: Thanks for the email Herb. Busch’s win on Sunday was huge, not only in terms of the points standings but also getting that win he needed to qualify for the Chase. Also, the win got Busch and rookie crew chief Adam Stevens their first trip to Victory Lane in the Sprint Cup Series together, and it was his first win since being back from his injury at Daytona, as well as his first checked flag as a father to newborn son, Brexton.

As to what his shot at making the Chase for the Sprint Cup is? Well, right now the win actually didn’t clinch a Chase spot for the No. 18 team. Due to the time Busch was away from the track with his injury, he’ll have to finish within the top 30 in points over the next 10 weeks of the season. Basically, that’s about a 15th–place finish (or better) each race. So far this season he’s averaged 24th and last season 17th. Essentially, Busch needs to run as well as possible the rest of the regular season, and another win certainly wouldn’t hurt.  That’s a huge hill to keep climbing, but it’s not impossible by any stretch.

Q: This week I was listening to SiriusXM NASCAR Radio, and Dave Moody talked about NASCAR and the teams owners becoming franchises in the sport- much like we see in the other major sports (NFL or MLB). Do you think this will happen, and does it really benefit the teams running each weekend? – Carl P., Odenton, Md.

A: Carl, this question is a really interesting one. I’ve heard about this recent play by NASCAR and the owners as well this week. What’s kind of funny is we’re only about two weeks from the one year anniversary of the formation of the Race Team Alliance. The timing of this story and the discussions taking place is really suspect to me. We’ve heard virtually nothing but radio silence coming from Rob Kauffman, co-owner of Michael Waltrip Racing and Chairman of the RTA since that announcement came last summer. So to hear now that there are talks of franchising these race teams, which has been a point of discussion for years, is just odd.

Like many things when it comes to dealing with the teams’ relationship with the sanctioning body, as well as finances, it’s so early in the rumor mill that I’ll believe it when I see it. In the end, I don’t think we’ll see NASCAR move toward this model. It’s really just more of a gamble and doesn’t necessarily mean any significant benefit for the race teams.

Interestingly enough, Forbes ranked the top-10 NASCAR teams in terms of value back in February. No surprise that Hendrick Motorsports, the home of icons of the sport like Jeff Gordon, Dale Earnhardt Jr. and Jimmie Johnson came in at number one on the list at $350 million. This report just highlights that these owners have massive investments into this sport, and most of them (at least from this top-10 list) enjoy healthy and viable businesses as independent contractors, a structure that has been in place since the sport’s inception. Franchising the race teams, or giving each team licenses to have Sprint Cup Series racecars, just doesn’t make a whole lot of sense to me – at least right now. We’ll see what happens as this story progresses.

I might even turn the sound on now that there isn’t a Waltrip in sight.

The idea of franchising teams in NASCAR has been kicked around for years. I recall the idea being brought up in the late-90’s when Roush and Hendrick were expanding into 4-car teams. I suspect that at some point NASCAR will go that route although I feel that when they do they will break what little ties that NASCAR has with your typical blue-collar can-be-found-in-the-garage type guy. I also suspect that if (or when) NASCAR decides to franchise teams that they will allow guys like Hendrick, Roush and Gibbs to own multiple teams (as well as their wives, girlfriends, and dogs) which in my opinion has ruined the racing over the years.

IMHO the top 35 rule was a left handed way of way of initating franchising without calling it that. For franchises, or even the current teams to maximize their value you have to restrict competition. That was achieved with the top 35. That made it virtually impossible for a significant team to come in. In fact, I dont think we’ve seen one since.
Thus you create the effect of franchises without calling them so. Want to play the game now you have invest in an existing team.