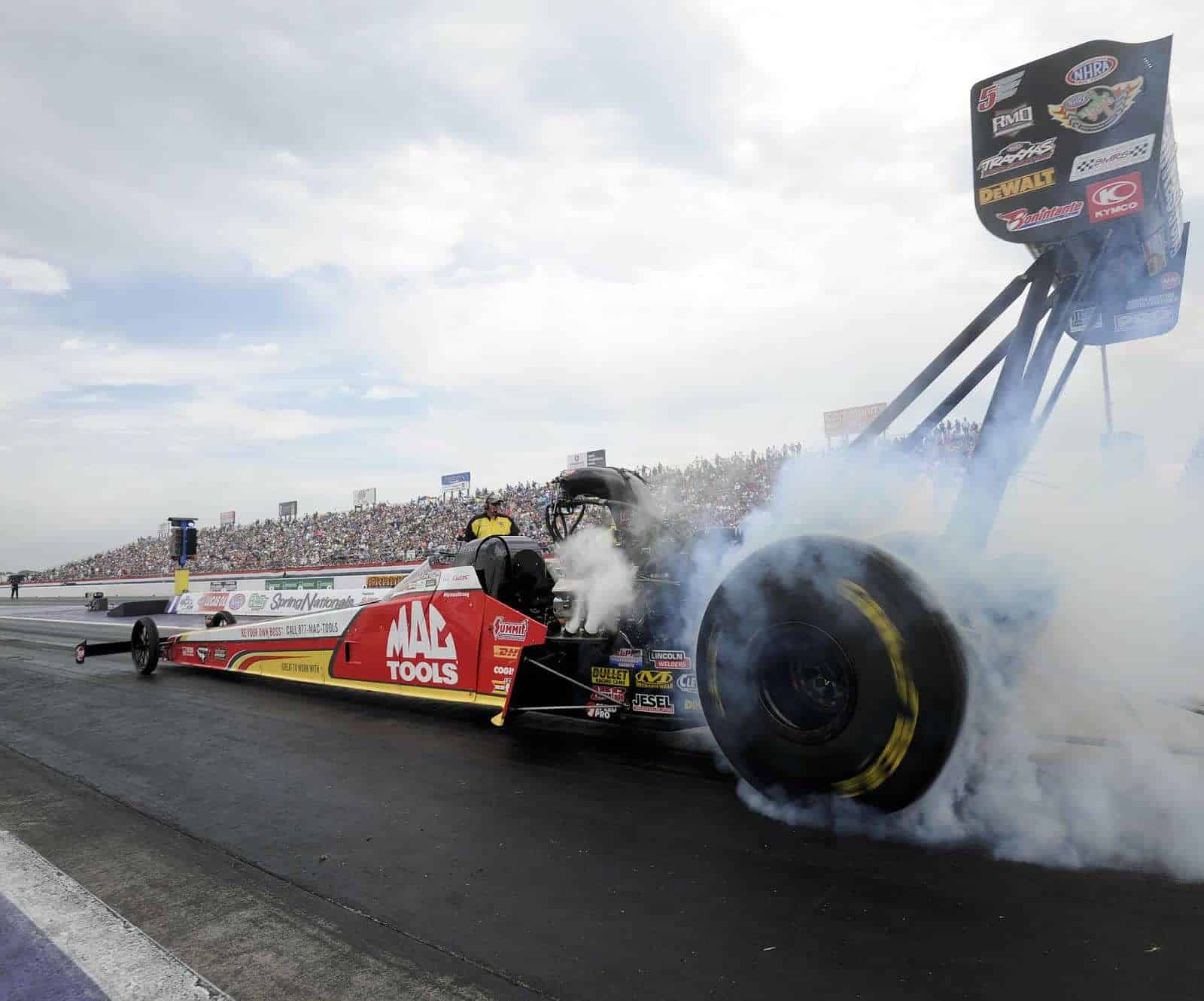 Going back one more time to the idea that NHRA drag racing is such a visual sport, it lends itself particularly well to the slow motion video. In truth, there are some absolutely astounding things going on within the three or four seconds it takes a Nitro car to launch and get 1,000 feet down the track. To put three or four seconds in perspective, it probably took you three or four seconds just to read the first sentence of this article. In that amount of time, a 10,000-horsepower beast left the starting line and completed a run.

Where slow motion video and photography comes into the equation is capturing some of the incredible things that go on during the even shorter fractions of seconds that make up the individual components of that run. This video made the rounds on social media a little earlier this week.

Nitro cars launch off the starting line in just fractions of a second but this is what is going on with the tires when they do. In this case, slow motion helps to give a better idea of how much power is being put down when the driver applies the pedal. Sometimes seeing things in slo mo also gives a better idea of how much engineering goes into all the parts of the cars just so they will stay together for four seconds. Those tires take much more abuse than what is visible with the naked eye and it gives a sense of appreciation for how much they can withstand.

NHRA today announced the promotion of Peter Clifford, formerly the organization’s long-time executive vice president and general manager, to president. Clifford replaces Tom Compton, who announced his retirement after 15 years on the job.

“Peter Clifford will be an outstanding president of the NHRA,” said Dallas Gardner, chairman of the NHRA board of directors. “Peter’s faithful and effective service to all constituents of the NHRA family will ensure a spectacular new era for everyone who loves our sport, and he brings a passion for the NHRA that is unmistakable.”

Clifford has been with the NHRA since 1997 and during his time there has been involved in just about every aspect of the sport from strategic planning and growth initiatives to overseeing NHRA owned racetracks, relationships with national event facilities and member tracks, publications, information technology, national event business, ticketing, customer service, and human resources. His background prior to coming to the NHRA was in finance, business, and economics.

2014 – Posted six wins; made eight final rounds; three-time No. 1 qualifier; made seventh straight Countdown appearance and won a race during the playoff for the sixth year in a row.

Some things most people don’t know about Antron: Antron likes to go fast no matter what the competition. In 1997, he ran fast enough in the 100-meter dash to qualify for the U.S. Olympic Trials. Drag racing is a family tradition for Antron, just like it is for many of the competitors in the NHRA. His father and uncle also raced. The next generation has also gotten involved. Antron has three children, daughter Arianna and sons Anson and Adler, and all three are currently competing in the Jr. Drag Racing League. Antron serves as truck driver, mechanic, and crew chief for his children, and in spite of the craziness he and his wife experience getting three dragsters and three children ready and to the line on time, he loves the family atmosphere of the Jr. league races. Antron is also one of the nicest people in the garage and loves to meet fans.

Brown tells us about a particularly strange case of mistaken identity he frequently encountered at the racetrack when he was mistaken for another racer in this week’s crazy things video.

Most people automatically think of the quarter-mile as the standard distance for a drag race, but this is not the case for all the racers of the NHRA Mello Yello Drag Racing Series. Pro Stock and Pro Stock Motorcycle do run the standard distance of 1320 feet, which is a quarter mile. Funny Cars and Top Fuel cars, however, run a race distance of 1,000 feet instead. Why is it shorter? Safety. The decision to shorten the distance was made in 2008 after the death of Funny Car driver Scott Kalitta at Englishtown. The thinking behind the move is that the cars were just getting too fast and the speeds too high. The shorter run keeps the speeds from getting as high and also allows for more shutdown room. It has, however, been a point of contention for purists who don’t like the departure from the traditional distance.

This is not only Brown’s best ever E.T., but it is also the national record for Top Fuel. Fellow Top Fuel driver Shawn Langdon posted a 3.700 at Pomona in February of this year, but because he was unable to post a second run within 1% of that run during the same race weekend to back up the run, Brown’s record still stands.

What’s a holiday weekend without some fast cars to make it complete? In between the hot dogs and fireworks, don’t forget to catch the Summit Racing Equipment NHRA Nationals this Sunday live!