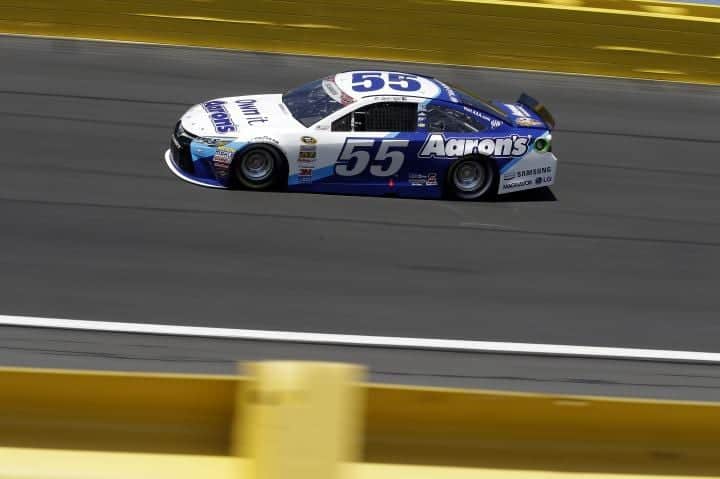 Ford has always been the way of life for David Ragan. Without Ford, he would have never broken into NASCAR’s premier division with an elite organization, replacing the legendary Mark Martin in 2007.

But after 291 consecutive starts with the blue oval, his tenure came to an end. Though it was thought he would be back with Front Row Motorsports – leaving the team to replace the injured Kyle Busch at Joe Gibbs Racing for a few events – he was given an ultimatum. It was either return to running outside the top 25 on a weekly basis, or have the chance to win with another organization outside of the Ford camp.

Grabbing my gear today from the Gibbs team. Thankful for the opportunity to work with a great team and sponsors over the last 2 months.

Ragan, who is only 29 years old, made the choice to sign with Michael Waltrip Racing for the remainder of the season starting at Kansas Speedway in May. The decision came after Brian Vickers was deemed ineligible to return due to a recurring blood clot, which put him out of the No. 55 Toyota Camry after Phoenix. With a few shots for Brett Moffitt to take the wheel of the car, the team opted to go with a veteran, and Ragan was quite the catch.

“I think it has been really good,” Ragan told Frontstretch at Pocono Raceway in June. “I’ve spent some extra time at the race shop to get to know everybody and their systems. They have a great pit crew, a great mechanic group that works on these Toyotas at the race shop and at the racetrack. I couldn’t imagine it going any better.”

The Georgia native has run six races with MWR, with a best finish of 13th at Dover – his lone top 20 with the team. With teammate Clint Bowyer sitting outside of the Chase bubble, team officials opted to make a major swap prior to the halfway point into the season. Crew chief Brian Pattie was sent to Ragan’s No. 55 car, while Billy Scott was deemed as the leader of Bowyer’s team after Pocono.

Making such a drastic move early into Ragan’s tenure with the team was quite the curveball. Prior to the announcement, he said that the two teams worked fairly close together, but he had not really had the chance to get to know many people that work on the No. 15 car.

The move now gives Ragan four crew chiefs between three different teams throughout the first 16 races of the season. To put things into perspective, prior to this season, he had driven for only two organizations, one manufacturer and six crew chiefs.

“I put a lot of pressure on myself to succeed in everything that I do,” said Ragan. “I think that ultimately, no one can put more pressure on me than I do myself. I expect David Ragan to be perfect on restart and on pit road and the short run, the long run and everything on and off the racetrack.

“That is the pressure that you have to put on yourself to succeed at this level. When it is all said and done and I’m old and retired, I can sit back and say I tried my hardest, I worked as hard as I could and did the best job that I could.”

Working with three teams this year alone, he has finally found a secure home at MWR. A position in the Chase for the Sprint Cup is possible, but work needs to be done, and Ragan understands that completely.

For the first time in over three years, he has the opportunity to win a race at a non-restrictor plate track. It has taken him time to readjust to racing in top-tier equipment, especially since he was racing on a week-to-week deal for JGR at first until his future was more secure. But the lucrative offer from MWR provided a chance for a better future for Ragan, a future that cannot be argued against.

“I really think we need to win a race,” he explained. “I think it is going to be way too close to try and race our way in on points. We kind of had a bad stretch with a few DNFs and a couple of bad races before I got here. We have to go work hard to go win a race.”

The two-time Cup Series winner has been victorious at only plate events – the first coming in 2011 at Daytona with Roush Fenway Racing and the second at Talladega with FRM in 2013. FRM, of course was the team that picked him up after RFR released him at the conclusion of the 2011 season. His popular underdog triumph while piloting the No. 34 car has kept his name alive over the years, and that is a major reason as to why he is in the position that he is in today.

Thanks to MWR, Ragan feels he can go out and win at any track. With the organization’s solid history at short tracks, along with his own, he believes that Richmond and Bristol will be very strong events for them.

Plus, in order to make the Chase, it appears that the No. 55 car will have to get into Victory Lane. Ragan currently sits 25th in the championship standings; that will not be enough to earn a spot in the playoffs.

“I really think we need to win a race,” said Ragan. “I think it is going to be way too close to try and race our way in on points. We kind of had a bad stretch with a few DNFs and a couple of bad races before I got here. We have to go work hard to go win a race.”

Away from the Ford camp, Ragan now has the chance to experience something new, something fresh and most importantly, something unique. Working with two different Toyota teams, he has already had a glimpse of what NASCAR’s youngest manufacturer offers that the blue oval does not.

“Every manufacturer is a little different,” he said. “I have only had experience with Ford over my nine years in the Sprint Cup Series. Toyota does a few little things different. They build their engines with TRD building the engines in California. They ship them to North Carolina, and that is a little different of a process. They have a great technical center Salisbury, N.C.

“They do have some extra tools that Ford doesn’t have. Ford has a long history in this sport – a lot of years of racing and winning championships, which is something Toyota doesn’t have because they are still relatively new to the sport. There are differences, but I don’t think anyone does it any better than Toyota.”

The added resources have provided Ragan the chance to show he can win races for the second time in his career. After he left RFR, there were very few seats open in the Cup Series, which landed him at FRM, where team owner Bob Jenkins capitalized on Ragan’s popularity in the garage. Bringing new companies into the sport, such as Farm Rich and CSX, his No. 34 team was building up quite the resume for a small team. But at the end of the day, Ragan is a racer and he wants the opportunity to bring home a trophy and put his name back in the Monday morning water cooler conversations.

“I met Mr. Edsel [Ford II], his family and everyone from Ford Performance,” Ragan explained. “Everyone has been great to me over the years, but they understand the opportunity with Michael Waltrip Racing and Aaron’s to come over and drive a really competitive car for one of the top teams in the sport. At the time, I wasn’t with one of the top programs from the Ford standpoint. It was an opportunity that I couldn’t pass up and they respected that.”

The difficult move was made, and Ragan spoke with Jenkins to make sure he understood why it had to be done.

“It was similar to the Ford conversation,” he explained. “It was difficult because Bob has meant a lot to me and to my career. He has been a big part of my career. It was a lot of fun working with Bob and Front Row. I still consider him a good friend. But at the end of the day, it was a business decision and I’m glad we can still be friends.”

As the season moves forward, nothing is guaranteed with Ragan and MWR. Their agreement is up at the end of the year, and so is the team’s contract with Aaron’s, which has been a partner with the organization since its Cup debut in 2002 with Kenny Wallace at Talladega.

“Hopefully, this is the team that I can drive for the rest of my career,” said Ragan. “I really enjoy racing with these guys and Aaron’s and Toyota. If I can finish my career here and have a successful run, that would be fun.”

While there are still 19 events left on the Cup Series schedule for this season, the clock is ticking. The long-lasting relationship with Aaron’s in up in the air since Vickers’ multiple health incidents this year, and Ragan is still searching for success as he adjusts to running competitively once again.

Ragan’s future could be solidified with one victory. That’s all it takes. This weekend’s race at Daytona is arguably his best opportunity to do so, with a combined seven top fives and 11 top 10s in 34 restrictor-plate starts, along with MWR’s long history of success at the plate events. Working with Bowyer – a driver who has nine top fives in 38 events at Talladega and Daytona combined – for the first time at a plate race, the two have an opportunity to give the team its first one-two finish in the team’s history.

At the end of the day, this is all a reminder to Ragan that he is still catching the eye of potential owners.

“It means that I’m still young and I’m thought of well in the garage. Hard work pays off. You never know when the next good opportunity will be around the corner, whether you are a rookie, if you are 30 years old or even 40 years old. You just never know what that next opportunity will be. As long as I am a Sprint Cup Series driver, I just need to keep working as hard as I can and be prepared for that opportunity if it does come along.”

Lucky him, now he can comfortably fade into obscurity with a historic losing organization in a replica of the word’s most boring car. I’m sure Ford is wondering how they will ever overcome his loss.