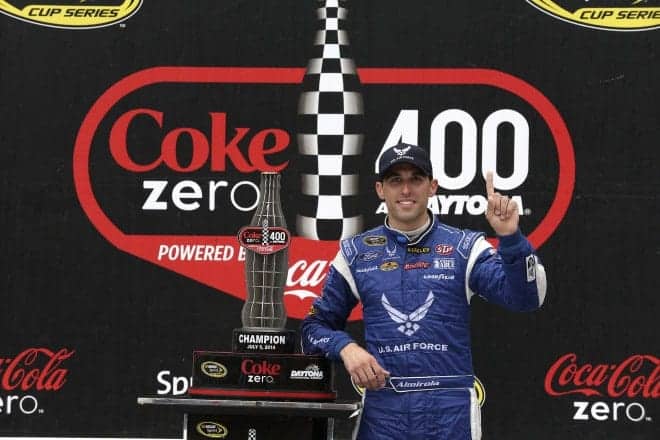 In many ways, the Coke Zero 400 is an inferior race to the Daytona 500. While the 400-mile race is run on the same track and under the lights, it’s not held to the same level of prestige as the season-opening event. Only Daytona 500 victors are said to be champions of Daytona International Speedway.

Still, while they might not get the prestige of Daytona 500 winners, many drivers have earned career-defining wins in what used to be called the Firecracker 400.

Aric Almirola was the most recent upset winner at the track, taking a rain-shortened and Chase-clinching victory in last year’s event. However, he isn’t the only one to surprise the field. Here are a few drivers that shocked the field to win at the Daytona Beach, Florida track.

The first upset story of the summer Daytona race came nearly 50 years ago when Sam McQuagg shocked the field to dominate the 1966 Firecracker 400.

McQuagg’s surprise win came as a result of innovation at the time. The 1966 Firecracker 400 was the first race in which NASCAR allowed teams to use a rear spoiler in a Cup series race.

Taking advantage of the new rule, factory engineers at Dodge installed the new invention on McQuagg’s car, allowing him to drive multiple miles per hour quicker than his competitors.

McQuagg would dominate the race, taking the win in under three hours. The winning margin of victory was one minute and six seconds, with Darel Derringer coming in second.

It’s very rare that someone fans in the stands don’t even know wins. However, such was the case in 1985, when Greg Sacks drove to his only Cup Series victory.

Sacks, a native of Long Island, New York, entered the race as an affiliate of DiGard Racing, which fielded Bobby Allison. Picked up by the team after his own team failed, Sacks was used as a test car. The plan for the day was for Sacks to run laps, make large adjustments and help the team learn.

Those plans would be scrapped early on, when Sacks showed tremendous speed. The New Yorker would drive to the front of the pack, and then, surprisingly, away from them, reeling in and passing the only other driver capable of doing so at the time, Bill Elliott, for the lead. Sacks went off from there to win the 1985 Pepsi Firecracker 400, the first Daytona race sponsored by Pepsi.

Modern NASCAR fans might know Jimmy Spencer, or “Mr. Excitement,” as some call him, for his feud with Kurt Busch and his to-the-point commentating style. However, back in 1994, Spencer was just another young shoe looking to prove he belonged in the NASCAR Sprint Cup Series.

The Berwick, Pennsylvania native came into July’s Daytona race as a darkhorse. He had shown speed on restrictor plates, scoring a career-best second-place finish at Talladega in 1993, and had qualified third for Saturday’s race. However, he had a significant challenge to overcome: the three black cars.

Earnhardt, whose steely eyes could strike fear in the bravest of drivers, sat on the pole in the No. 3 Goodwrench Chevrolet. Coming off of a 1993 championship season, Earnhardt’s Richard Childress Racing team entered Daytona with confidence at an all-time high, and with the July race being the first return to the 2.5-mile track for Cup Series since the death of Neil Bonnett, the Intimidator desperately wanted the victory.

Irvan, in the classic No. 28 Havoline Ford, set the pace once the green flag fell. In all, the California native led 86 of the race’s 160 laps, including the penultimate lap.

Irvan had the best car, but Spencer was right behind him. Spencer, driving the No. 27 McDonald’s Ford owned by Junior Johnson, kept himself up front and in contention all day. The former NASCAR Modified Tour champion found himself in second in the race’s closing stages, in contention to take his first win.

On the final lap, Spencer went into turns 1 and 2 high. When Irvan drove up to block him, Spencer dove to the bottom, pulling alongside Irvan’s fast Ford on the backstretch. The two drivers would stay side-by-side for the entire second-half of the lap, crossing the finish line in a dead heat.

Amazingly, when NASCAR looked at the photo of the race’s end, Spencer was declared the winner. The young driver had beaten Irvan to the line by a mere .008 seconds, earning his first career Cup victory.

The name Andretti is the equivalent of royalty in motorsports. However, the family is traditionally known for their open-wheel accomplishments. Going into the 1997 season, only Mario Andretti had gone to victory lane in NASCAR’s top division.

That would all change on a hot summer day in July, when John Andretti shocked the nation, dominating the 1997 Pepsi 400 at Daytona.

Andretti, a native of Indianapolis, Indiana, entered 1997 preparing for his second season behind the wheel of the No. 98 RCA Ford for Cale Yarborough.

To date, the 1997 edition of the summer Daytona race is remembered as the final Pepsi 400 ran during the day. Rookie Mike Skinner sat on the pole in RCR’s No. 31 Lowe’s Chevrolet, and seemed to be a favorite to score his first win.

However, Andretti would prove to be the strongest car in the race, taking the top spot on lap 3 and leading 113 laps en route to a victory. Still, the final lap had some controversy.

A late-race crash, coupled with a lack of green-white-checkered finish in the past, led to the race being settled by a one-lap shootout. Andretti took off on the restart, with veteran Earnhardt behind him.

Unfortunately, Andretti let himself get too far ahead. The seven-time champion appeared to have Andretti set up for a last-lap pass, but was surprised when Dale Jarrett and Sterling Marlin dove under him, stalling his momentum.

With the contenders behind him stalled out, Andretti would drive off to his first-career victory, while a large group crashed behind him in turn 3.

While not a surprise in the same sense as the other winners on this list, Greg Biffle’s 2003 triumph still shocked many because he was a relative unknown at the time.

Driving for Roush Fenway Racing (then Roush Racing), Biffle didn’t show a lot of speed throughout the weekend. Instead, the Washington native took advantage of a lap 79 caution to win with fuel strategy.

The NASCAR Xfinity Series and Camping World Truck Series champion was under duress for the entire final stint, with 2000 series champion Bobby Labonte right behind him. However, Labonte ran out of fuel coming out of turn 2 on the race’s final lap, allowing Biffle to cruise to his first win. The Biff has won 19 career races, but to date the 2003 Pepsi 400 is his only win at Daytona.