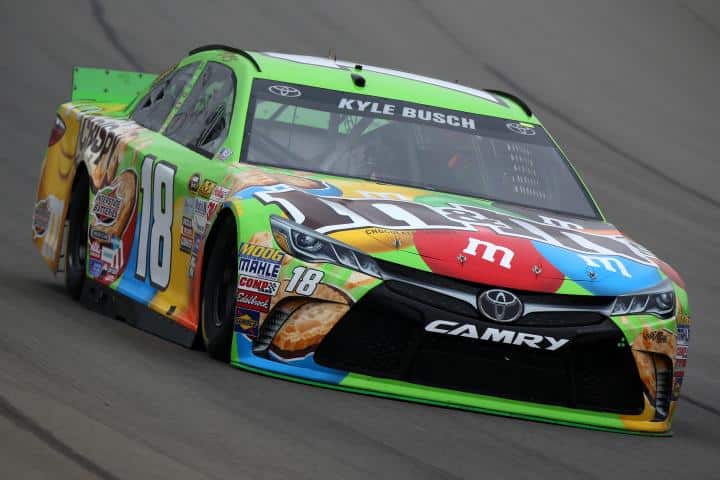 Kyle Busch‘s Sprint Cup quest for the Chase got a major boost Sunday with his Sonoma victory. The series’ 11th different winner this season, Busch’s injury exemption now gives the No. 18 team a realistic chance to make the playoffs. With ten races left, Busch must now find a way to claw inside the top 30 in points, closing the gap despite running 11 fewer races than his competition.

Is it possible? Yes. Is it probable? No, which is why it was intriguing to hear Busch’s take on the situation this weekend.

“I figured the win was going to be the hardest thing to get, but now that that’s here and it’s out of the way, we can now work toward being able to get ourselves top 30 [in points] and then just get some good solid finishes,” he said. “When we’re running third, fourth or fifth, we don’t have to take that chance of going for a win and having an opportunity of crashing or something like that.”

In essence, Busch is willing to leave potential wins on the table, settling for fewer points in order to stay more consistent. He might be gunshy after two major wrecks at Dover and Michigan disrupted momentum and put his No. 18 team in a deeper hole. 40 points a week, he thinks will be far better than going for more and winding up with four.

I appreciate Busch’s sentiment, I really do. But that’s also not the way he races, a guy trained on going 110% now focused on “staying comfortable” instead. It’s disrupting a comfort zone that’s made him a consistent race winner in the past, a strategy that also doesn’t guarantee good luck. Even if you’re “laying back,” leaving a football field between all other cars your tire can blow entering turn 3 in the closing laps. If your engine is going to splinter to pieces… guess what? It’s going to splinter to pieces.

We also need to look at the drivers Busch is trying to catch. David Gilliland, Cole Whitt and Justin Allgaier aren’t exactly running 35th every week. Let’s play this out over the next 10 races based on each driver’s finishes from last year.

Projected point totals after Richmond if they repeat 2014 performances:

As you can see, based on 2014 performance during these final 10 races Busch doesn’t come close to breaking through. If Gilliland’s 438 is indeed the “magic number,” Busch will actually have to average slightly better than a 13th-place finish to reach the top 30. You know how many drivers have better than a 13th-place average this season? Six: Kevin Harvick, Kurt Busch, Martin Truex Jr., Joey Logano, Dale Earnhardt Jr. and Jimmie Johnson. Notice there are no Toyotas in that group, nor are there any teammates from Joe Gibbs Racing.

That type of effort tells you every point is going to matter. Give up 10 points these next 10 weeks, settling for fifth instead of going for fourth and that very well could make the difference between making and missing this Chase. That’s the shame of it for Kyle, believing he can play it safe in this new format when in actuality he still needs to go for broke. There should be no other option… right?

“You’ve certainly got to play it out all the way through,” he said. “That’s one of the things that maybe I haven’t been so good at over the years, but you know, you’ve got to have that focus for not just one week but for a long time, and 10 weeks is a long time, so we’ve just got to do our job, both Adam and I. We can’t screw up.”

To do that, Busch needs every point, every position, potentially even another win. He shouldn’t settle for less.

Sort of fishy when making the chase is more important than actually going for wins ad it serves in my mind to lessen the overall quality of the racing even more than the old system which supposedly rewarded consistency. Even so I can’t image Kyle making the chase as this type of racing doesn’t suit his style. I’m also thinking that this car doesn’t suit his style either in a similar manner to the way tony is struggling. The only driver that i see with a super aggressive style having any success with this car is Kurt. But i also notice that his aggression has either dulled, been tamed or neutered (judging from the way he handles interviews and doesn’t seem to try to fight off harvick when he goes by.) And that makes me wonder… will a driver with the style if say a jimmy, spencer a tim richmond, a kyle bush ever be able to win the championship? I don’t think so but man they sure are fun to watch. I can’t think of many drivers who drive so aggressively who’ve won a championship… sr. stewart, BK and maybe a younger gordon. I much rather watch a great race than a championship “battle.” screw teh championship and the asinine chase. you go kyle. do what you do best.

Just ask yourself which will bring more money to the team (owners) a race win, or making the Chase? Explains a lot of things doesn’t it?

agree with both of you. I didn’t and don’t watch racing to see who makes the chase. I watch it to enjoy each race, but that’s been gone for a long while. Points racing? well it has gotten worse not better with the chase in place.

I DON’T CARE ABOUT ANYTHING RELATING TO THE PUNK. sorry for yelling

Amen Brother! Besides, does anyone truly believe that FIXCAR won’t just waive him into the beloved Chase if he does not end up in the top 30 in points?