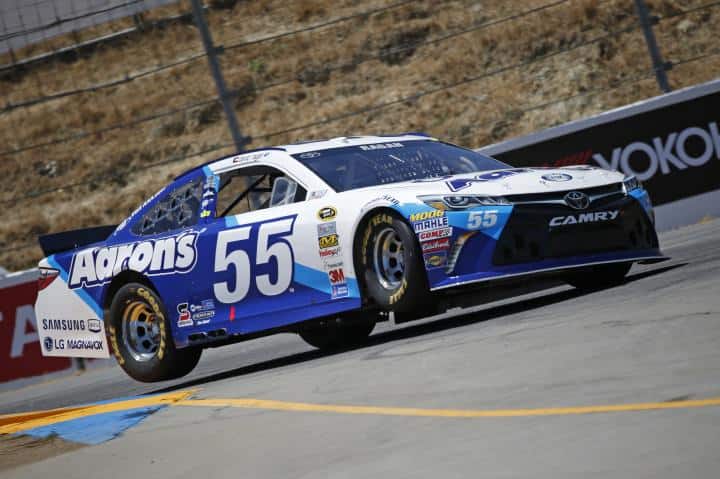 It’s been a difficult couple years for Michael Waltrip Racing.

At the end of the Sept. 7 Federated Auto Parts 400 at Richmond International Raceway in 2013, the team seemed to be in the best position in its then-seven-year existence. Clint Bowyer was incredibly consistent, making the Chase for the second-straight year and appearing to be the leader the growing organization wanted him to be. Martin Truex Jr., who took a leap of faith to join the team in 2010, had won at Sonoma Raceway and appeared to have given the team a second Chase berth. Brian Vickers had won his first race since 2009 in the team’s No. 55 Aaron’s Toyota, and appeared to be the final piece necessary for the team to field three competitive cars each week.

After a five-year grind, MWR appeared to have finally risen to an elite level. Life seemed like it couldn’t get much better for team owners Michael Waltrip and Rob Kauffman.

Unfortunately, this story didn’t have a happy ending.

Instead, everything fell apart.

We all know the storylines. NASCAR determined that Bowyer had intentionally spun himself out in the late stages of the Richmond race to allow teammate Truex to drive his way into the Chase. Truex was removed from the Chase, lost sponsorship backing from NAPA Auto Parts and had to switch teams over the offseason.

MWR struggled. Bowyer, who had been a consistent presence in the front in the Cup Series for the better part of a decade, managed only 15 top 10s in 2014, the fewest he’s had since his rookie year. Vickers returned to full-time competition in 2014, but failed to make the Chase, finishing in 22nd.

MWR’s struggles continued into the first half of 2015. Recurring setbacks with his heart forced Vickers to back out of the car after running only two races this season. The organization has managed two top-10 results for Bowyer at Daytona and rookie Brett Moffitt at Atlanta, but failed to crack the top 10 again until Bowyer managed a ninth-place result at Richmond in April.

Following a brief moment as a NASCAR elite, MWR fell back down into racing mediocrity. Rubbing salt in the wound, the first person from the team’s 2013 run to find victory lane was Truex, who has soared to new levels this season with the Denver, Colorado-based Furniture Row Racing.

The No. 55 team continues to struggle today. After fielding three different drivers through the season’s early months, David Ragan took over the ride full-time starting with the May 9 Spongebob Squarepants 400 at Kansas Speedway. Unfortunately, Ragan has managed only two finishes inside the top 30 in his first six starts, with a best finish of 13th at Dover International Speedway.

WOLKIN: David Ragan Settles In With MWR After Long Journey Back To The Top

Bowyer, on the other hand, is beginning to show signs of hope.

The improvement in Bowyer’s No. 15 team has been quiet, but noticeable. After finishing outside the top 20 in four of the first five races, the 35-year-old has finished inside the top 20 in seven of the last 11 events while also winning the Sprint Showdown at Charlotte Motor Speedway. The team has rattled off three top-10 results in the last four races, and even came close to reaching Victory Lane at Sonoma, finishing just behind the Busch brothers in third.

Top 10s aren’t the goal for MWR, nor for Bowyer – the Emporia, Kansas native has eight-career victories, after all – but the improvement is still a good sign for a team that seemed to be fading into obscurity only a couple months ago.

The gains aren’t just important for MWR, either. They’re critical for Toyota. The manufacturer has four wins on the year, but they’ve all come from Joe Gibbs Racing. Adding insult to injury, only Bowyer and three of the JGR drivers (Matt Kenseth, Denny Hamlin and Carl Edwards) are currently inside the top 30 in points.

Chevrolet drivers hold 13 of the top-20 positions in the championship points standings, and Ford holds another four, leaving only three Toyota drivers in the group. NASCAR’s newest manufacturer needs MWR to succeed if it has any hopes of achieving the accomplishments of its rivals.

MWR is steadily making gains and has a chance to salvage this season. The Cornelius, N.C.-based team just needs one major accomplishment to springboard them back into contention: a win to get into the Chase.

It’s been a long time since MWR made its way to Victory Lane. Vickers was the last to accomplish the feat, earning a surprising victory at New Hampshire Motor Speedway in 2013. However, as discussed earlier this week, there are some tracks left before the Chase that could yield a triumph for the team.

The first chance for the team to take a victory comes this weekend, when the field heads to Daytona International Speedway for the Coke Zero 400. Ragan, 29, is a former winner of the race, and both he and Bowyer have run well at restrictor-plate tracks in the past, earning two wins each. Bowyer is also a two-time winner at both New Hampshire and Richmond, and has excelled on road courses in recent years, making Watkins Glen International a potential Chase-clinching race for the 10-year veteran.

MWR has proven in the past that it can compete with the best teams in NASCAR, and with some improvement this year could do so again. The group just needs to find a way back to Victory Lane, and ultimately the Chase, for the sake of the organization, Toyota and NASCAR.

Yes, yes, without fan favorite and losing poster boy Michael Waltrip and his stable of kit cars decaled up like the world’s most boring automobile NASCAR is surely doomed! DOOMED I tell you, DOOMED!

Some times bad things happen – for a reason. While I think that the Richmond incident was not unique, they were so obvious about it they had to be punished.
Today they are in the same situation as several others. Not their manufacturers prime team, struggling along in that middle ground.

Two FRONTSTRETCH columns read as if they were written by MWR PR people. They would be easier to support if
we didn’t continue to get a belly full of Mikey and the constant in car camera of the 5 Hour Energy, no matter where it is running.

I am anxious to see the attendance this week since some marketing genius decided to start a race at 7:45 the
eve of a workday. TV, not the fans, rules!