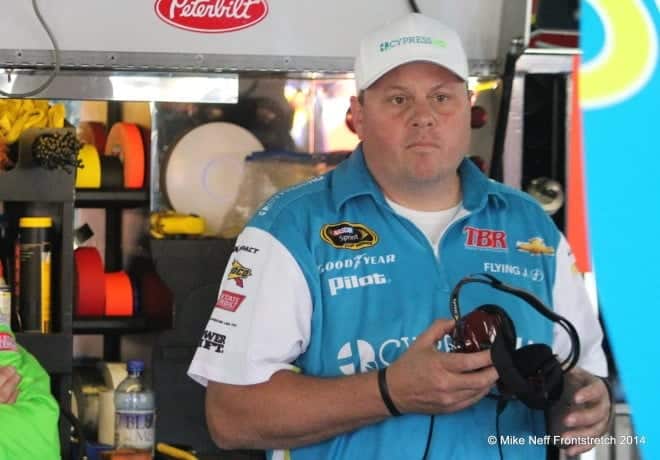 As the series heads to Daytona this week, marking the figurative “midpoint” of the 2015 season Kevin “Bono” Manion is just getting settled in. New to Richard Petty Motorsports, he’s finishing up his second month there after jumping from Tommy Baldwin Racing to be the head wrench for Sam Hornish Jr. The team is coming off their second top 10 of the season, a 10th at Sonoma which was Hornish’s first Sprint Cup top 10 outside of a plate race in three years. Now, the spirits are up at RPM as the organization heads back to Daytona, the scene of their most recent victory as Aric Almirola took home top honors last July.

Joining us for Tech Talk this week, Manion discusses the importance of handling at Daytona as preparation for Sunday night’s race heats up. He also examines NASCAR-issued and mandated parts for plate races, oil tanks for different styles of tracks, plus how ambient temperature will have an effect throughout the weekend.

Mike Neff, Frontstretch: You managed to get Sam Hornish Jr. his first top 10 at a non-restrictor plate track since 2012 last weekend at Sonoma. I have to imagine you are pretty happy about that.

Kevin “Bono” Manion: Yeah, we are really happy. It was a battle to get there, that was for sure. The tires and the track position… plus, we were having some brake issues for some reason. It was a hard fought battle all day but we’re really happy with the end result. Our car was really good on the short run. We got the caution at the end and we were really running well after 12–15 laps. Then, it would start having some tire issues; it would start wheel-hopping quite a bit. Short run was good though; we were able to come get tires, started 19th and drove up to 10th. That was a great day for us.

Neff: Speaking of tires, we did have some chunking issues but they weren’t horribly bad. Were you surprised under that last caution that, for all intents and purposes, everyone on the lead lap came to the pits to get tires?

Manion: Yeah. As for us, we knew our position. We had talked about it before the race. If we were anywhere from eighth on back, we would come. So, it was a little shocking that second and third place came. A couple of guys stayed out for track position that were running mid-pack. We started 17th or 19th and passed everyone who stayed out except Jimmie Johnson, who was the leader, so he was in the best position. Tires were definitely worth quite a bit so we knew we wanted to come and take them as much as the pace fell off. That used to be a two-stop, strategy race and never pit as long as you had enough gas. The tire they brought had a lot of falloff which was good; it made for good racing. It did have a few problems with chunking and we fought those problems with every stint except the last one, which was really good because that was when we needed the best tires and we had them.

Neff: Now, we are headed off to Daytona. The track was paved a few years back but it has started to age and, as we saw in February, handling is becoming an issue. Do you feel like handling is going to be a big component of the race Sunday night?

Manion: One thing is that it is a night race, so that is going to help out a little bit, but for sure handling is going to be a factor. It has in the past, it was in February and it will be again this week. We’ll trim the cars out. There is a fine line and a happy median. We definitely added some downforce to the car before we loaded it into the truck. It obviously will hurt the qualifying a little bit but we are here to race and we’re here to win. That is the plan.

Neff: You mentioned that it is a night race but it is still the middle of summer in Florida. How significantly will the track temperature decrease once the sun goes down and darkness sets in?

Manion: It is the usual forecast for Daytona Beach all week, including Sunday night, to have showers and possible thunderstorms. That is always a possibility. They come and go; they move through quickly. They also cool it down when it rains. The track cooling off with or without rain is huge for us. It just makes everything better. The water temp is better because we are mandated on our grille opening. In February, it was hot and daytime racing so we were close to borderline overheating and a lot of people were. We weren’t tandem drafting but we were drafting in a large pack so that can make it warmer. As far as the temperature falloff, it helps everything. It helps the tire longevity, it helps the grip in the racecar, so it is a “win-win.” It helps the fans stay a little bit cooler up there watching the race, too so we welcome the cooler temperatures at night.

Neff: Does the rules package that we are running on the restrictor plate tracks act the same as we have run for a couple of years?

Manion: Yes, absolutely; last year for sure. I can’t think back to the year before, but the rules have been exactly the same for 2014, ’15 and hopefully ’16. They have been talking about making some changes there but I think it is a pretty good package right now. With all of the other changes we’ve been dealing with this year hopefully we’ll keep the speedway cars the way they are and let us just keep working on them. We keep making small changes and keep making them better.

Manion: It is really only three things that are mandated by NASCAR. Actually, it is a little more than three now that I think about it. The rear spoiler is received from NASCAR; also, there’s the restrictor plate that NASCAR will put on or supervise you putting it on, along with the spoiler. NASCAR gets both of those items back at the end of the event. Things that we purchase from a supplier are rear springs and rear shocks that are mandated. There are a lot of other rules but those are the only parts that are mandated.

Manion: Daytona to Martinsville is huge! As far as numbers, off the top of my head, I don’t really have them for you to be honest and that is probably not a good subject to discuss, as far as the weight goes. I will say that the calipers and rotors are different between the qualifying and the actual race at Daytona or Talladega because of the impound procedures. Daytona 500 qualifying we will run really, really lightweight, smallest calipers, smallest rotors, everything we can. During race time we have actually, believe it or not, beefed up the size of the calipers and rotors for getting on pit road. There are a lot of green flag stops in restrictor plate racing. The charge to pit road and the time you can make up if you have a good, strong braking package outweighs the weight advantage of the small caliper and rotor.

Neff: With lower rpms on a plate track and reduced abuse on the engine, do you run less volume of oil at a plate track than you do at other tracks where you turn more rpms?

Manion: I think that is engine shop specific. What we do run is a different oil tank from a downforce to a superspeedway. On a downforce or short track we run a low center of gravity, fat-bottomed oil tank. It is shaped like a pear so most of the oil is in the bottom of the tank. On a speedway, you have to worry about the aero underbody… the oil tank we use there is tall and skinny so it can get the rear dog house sheet metal up to give a cavity for the air to occupy as the car compresses. It is a catch-22 there. I’m pretty sure the tanks hold the same amount of oil but have two unique shapes for two different reasons.

Neff: You haven’t been in the Ford camp for too long and you dealt with Chevrolets for a long time. The Ford engines, at least when they rolled out the FR-9 a couple of years ago, were significantly better at cooling. As a result, they could run them a bit more taped off, especially at plate tracks. In your review of the notes on the Fords and getting ready for this weekend, does it seem you’ll have an advantage – at least from a temperature perspective – with the Ford engine?

Manion: That’s a good question. I did review the notes and they did run a little bit of tape in the spring. When I say a little bit, I’m talking about a couple square inches because that hole that NASCAR mandates is pretty small to begin with. Looking at pictures from last year, I don’t think anybody will be running any tape. If they do, it will be such a small amount the amount of gain on drag will be almost immeasurable. These motors like to run cool so I don’t think we’ll be adding any tape. I know for sure, on the team I was with in the spring we didn’t run any tape. We did run a little bit last year so it is all dependent on what the temperature is. July is still July. It is still going to be hot even though it is at night and the ambient temperature is still going to be up there.