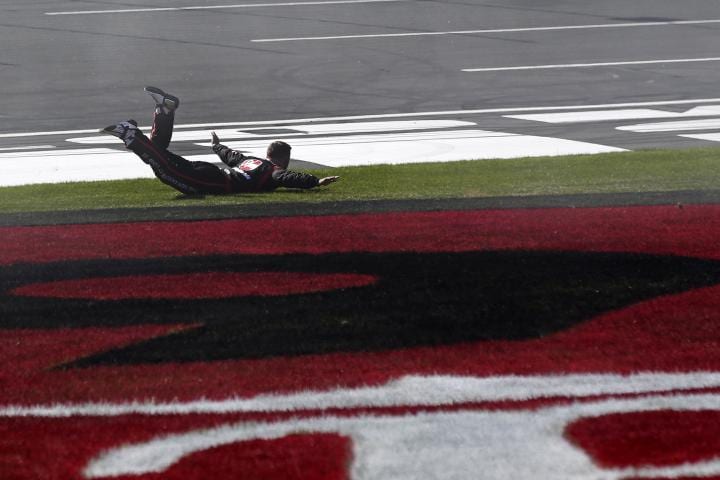 Independence Day is famous for its fireworks.

Austin Dillon survived all of the night’s fireworks to win his very first race at Daytona International Speedway in any of NASCAR’s three national series. The 25-year-old driver was able to avoid two late-race multi-car incidents to score his third Xfinity Series victory this season.

The win was also Dillon’s first race back with crew chief Danny Stockman Jr., as Stockman had been working with Austin’s brother Ty on the No. 3 car since 2014 prior to this weekend. This was Stockman’s first victory as a crew chief since winning with Ty at Indianapolis Motor Speedway in July of 2014.

Dillon was hardly the dominant driver of the day, however. Brian Scott, who started the race alongside polesitter Daniel Suarez, led a race-high 84 laps before a wreck on lap 96 took Scott and several other competitors out of contention. As Elliott Sadler made a run for the lead on the high side, Scott moved up the track to try and block, but instead slid across the nose of Sadler’s car, starting a 12-car crash with just a handful of laps remaining.

Only nine cars remained on the lead lap in the final green-white-checkered run of the night.

Chris Buescher and Ty Dillon, who are both competing for the Xfinity Series championship, were involved in one of two large wrecks in the closing stages of the race.

That was a race? Lets see, mostly single-file running, nobody could pass, the outside line was stagnant, whoever was in front stayed there, unless they did something stupid (Scott blocking Sadler), and lead changes only occurring during pit stops.

If tonight’s Cup race is anything like that, and I pretty much know it will be, NASCAR has a bigger problem than dealing with fan anger over a piece of cloth!