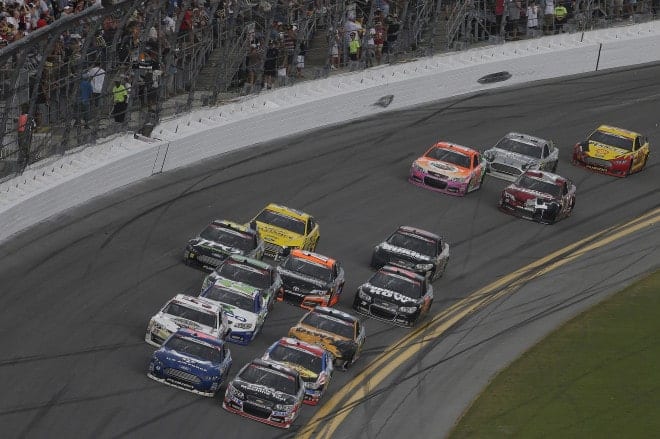 Due to threatening weather, qualifying for the Coke Zero 400 at Daytona International Speedway was cancelled Saturday evening. However, Dale Earnhardt Jr is probably the only driver that is happy that this parade was rained on, as the No. 88 Nationwide Insurance Chevrolet will start on the pole.

With qualifying being cancelled, the race lineup is set based on speeds from the first practice session putting Earnhardt Jr on the pole with a speed in practice of 202. 284 mph.

David Gilliland, who won the pole for this race last year when rained ended qualifying early, posted the sixth fastest time in first practice and will star sixth in the race. AJ Allmendinger, looking to rebound from a disappointing showing in Sonoma, will start seventh. 2011 July Daytona winner David Ragan will start eighth, followed by Jamie McMurray in ninth and Kasey Kahne in 10th.

Several fast cars, including Tony Stewart, defending race winner Aric Almirola and Daytona 500 winner Joey Logano will start the 400-mile, 160-lap race from outside the top 30 on Sunday night. With qualifying being cancelled, Ryan Blaney, in the No. 21 for Wood Brothers Racing, and Michael McDowell will miss the 17th race of the NSCS season due to having the least amount of qualifying attempts in the field.

Ok, let me get this straight. In the first session, someone goes out and sets the 22nd fastest time (Blaney) and 38th fastest time (McDowell), and two guys sit in the garage (Gaughn and Wise). Then, in session 2, Blaney is 9th fastest, McDowell is 15th, while wise is 31st and Gaughn is 34th. Then, here comes the rain. Qualifying is cancelled and the starting line-up is set by session number 1 times. But, because the Wood Brothers and McDowell’s team have fewer qualifying attempts, two guys who didn’t go out to practise are in the race and two other teams go home. I know the Woods would have been competitive, maybe McDowell too. Wise’s team is a back-marker. And Gaughn? Well, who knows how he’ll do.

So, is this a new game? A back-marker team is almost guaranteed a starting spot just by showing up, and because a team is on a limited schedule, they are not guaranteed a starting spot, despite being far more competitive. So, all the back-marker has to do is sit out the first practise session and hope for rain so he gets in and sends the other guy home? Oh that’s fair!

Hey NASCAR! Try this: Either no practise time in session one, go home, or, cut out the BBS (Brian’s Bulls**t) and take the 43 fastest times, regardless!

I admit Ken that when I heard about this I was totally confused and after some thought I find that I’m just as perplexed by how NASCAR set the line-up after the rain came. It makes no sense to me. Perhaps someone else can explain this system. I’m with you, give me the fastest 43.

Chris, I’m aware of the rule about the number of attempts being used to determine who gets in and who goes home. My major beef is with the stunt Wise’s and Gaughan’s (yes, I realised I spelled his name wrong in my first post) teams pulled. They didn’t even get in a time. Blaney was 22nd fastest in the first session and 9th in the second one. Wise and Gaughan were 31st and 35th in the second session. They played the game of hoping the weather turned bad, basically giving them both a free pass without even trying. Personally, I hope next time they try this stunt, both get burned. It’s like the time Boris Said qualified I think 7th for the July race one year. There were two cars left to go out when the skies opened up, washing out the rest of qualifying. The result? Said went home. NASCAR needs to address this crock. As I said, you either turn in a time, regardless, or go home, or, better yet, take the fastest 43, no questions asked.

I agree Ken. If new team shows up and turns a top-5 qualifying time yet another team doesn’t even make an attempt to turn a lap should they get in just because they have made more qualifying attempts should the skies open up? Where is the logic in that?