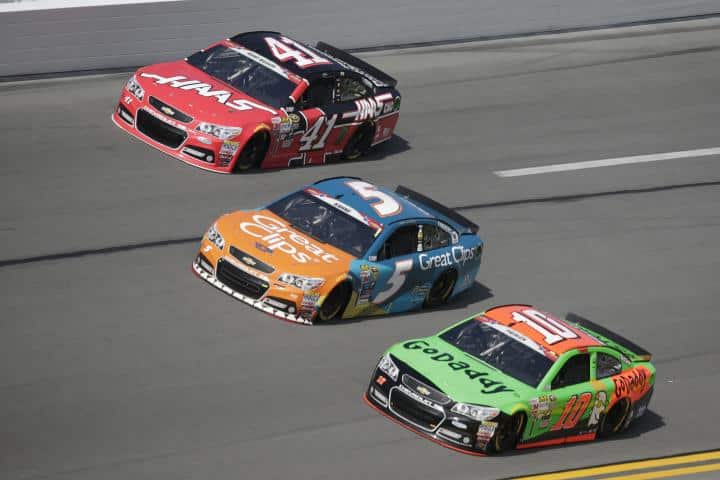 The final practice session of the day at Daytona International Speedway was far calmer than the first. There was still some drafting on-track, but it was mainly of the single-file variety. In addition, a group of drivers focused their on-track time on single-car runs.

In the draft, Hendrick Motorsports’ engine program showed its strength. Cars with Hendrick engines took the top-eight positions on the speed chart. That chart was led by Danica Patrick, whose lap of 45.424 seconds (198.133 mph) was the quickest lap of the session. Teammates Kurt Busch and Kevin Harvick drafted together and turned in the second and third quickest times of the session, four hundredths of a second behind Patrick. Team co-owner Tony Stewart was fourth quickest.

HMS itself took up the next four spots on the charts, with Kasey Kahne being the fastest of the bunch in fifth, followed by Jeff Gordon and Dale Earnhardt Jr. Jimmie Johnson, as is the norm for the No. 48 team, stuck mainly to single-car runs.  However, his best single-car run was good enough for eighth quickest at 46.497 seconds (193.561 mph).

Best of the non-Chevrolets was Ryan Blaney in ninth, while Carl Edwards rounded out the top 10 in his backup car. All of the drivers involved in the big crash during the first session all turned laps during Happy Hour.

With 45 cars entered in the race, two will fail to qualify. Jeb Burton‘s speed in both sessions is not the best. He was 42nd in the first session and 40th in Happy Hour. Since his No. 26 team is 44th in owners’ points, he must qualify in the top 36 to get into the race. Brendan Gaughan, who also must qualify on speed, turned a lap over three-tenths of a second faster than Burton, good enough for 34th in Happy Hour. Regardless, with four drivers not taking time in the session, he’s squarely on the bubble. If either driver can turn in a lap fast enough for the top 36, then JJ Yeley could be at risk, as his best lap of the day was only a couple of hundredths faster than Burton’s.

Sprint Cup Qualifying is scheduled to be held at 4:45 p.m. on Saturday. Coverage starts at 4:30 p.m. on NBCSN.