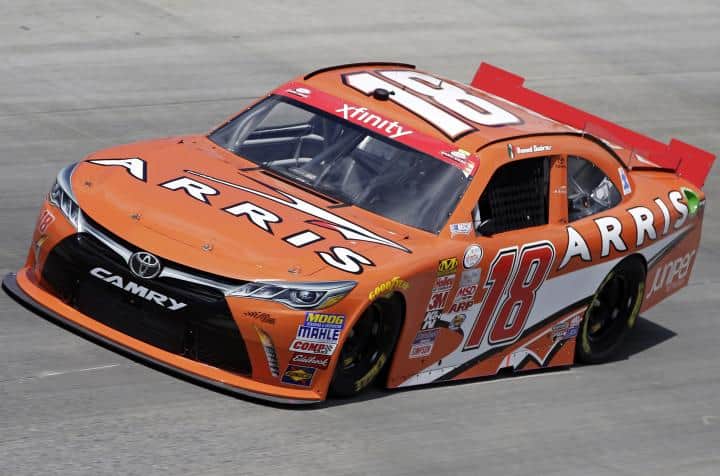 The last time the NASCAR Xfinity Series was at Daytona International Speedway, the No.18 Arris Toyota was sliding out of control in turn 4, triggering a multi-car pileup. Five months later, Daniel Suarez, who has steadily shown improvement in his rookie season, will start on the pole for Saturday night’s running of the Subway Firecracker 250.

Suarez’s average lap speed of 180.256 mph (49.929 seconds) was enough to best Richard Childress Racing driver Brian Scott. Suarez was the only driver to put up a time that was under 50 seconds.

The Dillon brothers start sixth and seventh, with younger brother Ty beating Austin, who won the pole at Daytona in February.

February Daytona winner Ryan Reed will look to sweep the 2015 races at the historic 2.5-mile track from the eighth starting position.

Reigning Xfinity Series champion Chase Elliott will try to earn his first win of the season from the tenth starting position.

Roush Fenway Racing’s Chris Buescher was .002 seconds away from making it into the second and final round of qualifying. His No. 60 Ford will roll of the grid for the 250-mile, 100-lap event from the 13th position, alongside his teammate Darrell Wallace Jr.

Four drivers failed to qualify for the race: Derrike Cope, Derek White, Jeff Green and Chris Cockrum. However, the No. 13 of Mark Thompson failed post-qualifying inspection and his time was disallowed, allowing Cope to take his place in the starting lineup. Cope will start 33rd.