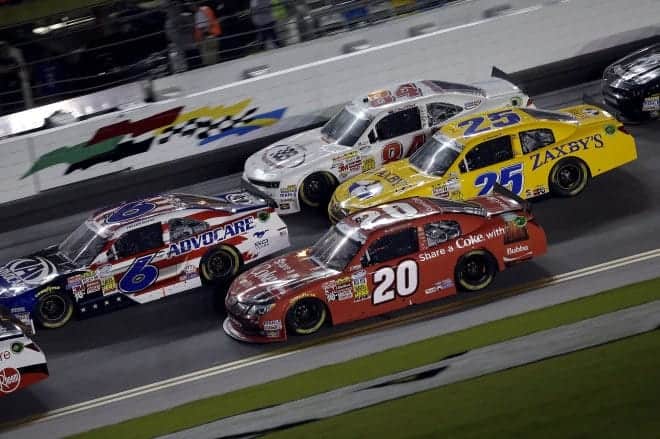 On Friday, the Xfinity Series held two practice sessions in preparation for Saturday night’s Subway Firecracker 250. Given the need to protect machinery, most drivers participated in only one of the sessions.

The vast majority of the field went out on track in the first session. While learning what your car can and can’t do in the draft is important in restrictor plate practices, there were only a couple of periods of time where drafting was prevalent. The first of those was right at the beginning of the session. The other period of time was just after the halfway point of the session.

The pack was much bigger at the beginning of the season, and as a result, the fastest laps could be found there. David Ragan, driving the No. 20 Interstate Batteries Toyota for Joe Gibbs Racing this week, turned in the fastest lap at 47.226 seconds (190.573 mph). Darrell Wallace Jr. was the fastest Xfinity Series regular in second, followed by Roush Fenway Racing teammate Ryan Reed. Daniel Suarez was fourth, while Brian Scott rounded out the top five.

36 drivers turned in laps during the first practice session, while only 26 drafted. Those who did not set a time were Dexter Bean (who did get on-track, but failed to complete a lap), Chris Cockrum, Derrike Cope, Bobby Gerhart, Benny Gordon, Morgan Shepherd, Mark Thompson and Derek White.

During the second session, there was very little drafting. The only times that drafting was seen was when teammates paired up. Instead, the focus was on single-car runs, and more specifically, those teams that need to put up good times in qualifying Saturday afternoon just to be able to make the top 33 and qualify for the race on speed.

Many of the drivers took Happy Hour off, convinced that they couldn’t learn all that much more about their rides.  -The 23 who did venture out onto the 2.5mile tri-oval did so only in short stints.

The fastest of those drivers who ventured out was Ty Dillon. The younger of the Dillon brothers turned in a lap of 50.018 seconds (179.978 mph) on a solo run for the quickest lap of the session. That lap was a tenth of a second quicker than Carl Long Racing teammates Thompson and White. The teammates got together in a two-car draft and turned in equal laps at average of 179.759 mph. Thompson was second fastest, while White was third, mainly because Thompson was the first to turn in the lap. Joey Logano was the second-fastest solo runner in fourth overall. Timmy Hill, driving this week for JGL Racing, rounded out the top five.

With 44 cars in Daytona, four will miss the field. Based on the times set on Friday, Cockrum, Shepherd, Bean and Harmon appear to be the drivers that need to find some speed the most. However, Thompson and White’s best times are not representative of their true pace since they were set in a draft.

Qualifying for the Xfinity Series is scheduled for 2:30 p.m. Saturday afternoon. The session will be televised live on NBCSN.