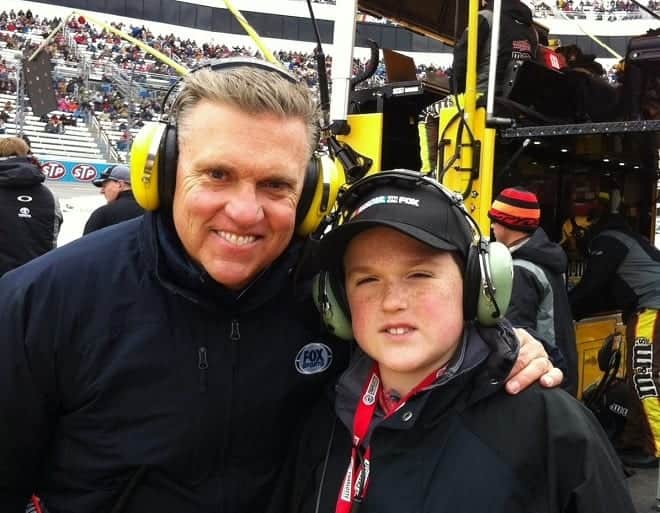 On Saturday afternoon at Daytona International Speedway, NASCAR Hall of Fame Executive Director Winston Kelley and Brett Jewkes announced that Steve Byrnes, recently of FOX Sports, has been named as the receipient of the fifth Squier-Hall Award for NASCAR Media Excellence. As a result, Byrnes will be inducted into the NASCAR Hall of Fame as part of the Class of 2016 on Jan. 22, 2016. Byrnes rounds out a seven-man induction class that Jerry Cook, Bobby Isaac, Terry Labonte, O. Bruton Smith, Curtis Turner and Landmark Award winner Harold Brasington.

“For three decades, Steve’s hard work and humanity brought NASCAR fans closer to their favorite drivers,” France said.  “His passion for the stories and people he covered was always reflected in his work. Steve was respected for his professionalism and adored for his easy demeanor.”

“Personally, I was privileged to be able to work with [Byrnes] on pit road. [Byrnes] was a colleague and we would exchange stories in the garage area and on pit road. Had a lot of good laughs together. The thing that I remember best about Steve from a professional standpoint is that he had such respect from everybody in the garage and the competitors because of the way that he conducted himself. He was reporting the story, but he wasn’t the story. He was one of the few people that I’ve never anything bad said about. That’s difficult in an industry like this where we all travel together so much.”

For the last 14 years of his life, Byrnes worked for FOX Sports. His roles there included working as a pit reporter for FOX’s Sprint Cup coverage and hosting Totally NASCAR (originally on FOX Sports Net, then SPEED) and NASCAR RaceHub, daily NASCAR shows. In addition, Byrnes was tapped as the play-by-play commentator for the Camping World Truck Series last year after Rick Allen left FOX Sports for NBC Sports.

Prior to that, Byrnes worked for Sunbelt Video in Charlotte and was the co-host of Inside Winston Cup Racing with Ned Jarrett starting in 1986. He also worked as a pit reporter for CBS, TNN and TBS

Well deserved! That sun shining this morning, where I am anyway, must have been Steve smiling!