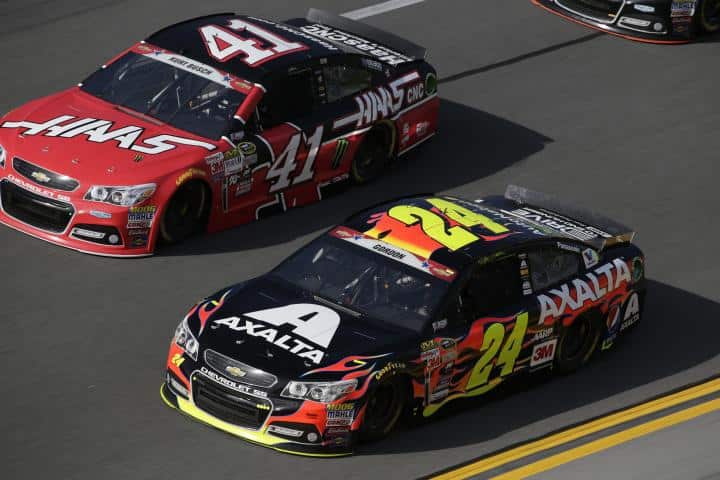 Much like last week at Sonoma, this week’s race will require a bit of luck for your NASCAR Fantasy Live team. For the season opening Daytona 500 I try to pick drivers all starting towards the rear of the field to maximize place-differential points while minimizing the risk from a driver crashing out. Normally by this time in the season there are some drivers locked in on your team because you have gained some money in the bank with them and you are forced to ride out the plate races with one or two drivers starting where you prefer they didn’t. It turns out this week we were the ones who got lucky, as qualifying was rained out, and that put a bunch of star drivers starting in back of the pack.

So who made the team this week? Well just continue reading along to find out. As always I’m using the price you would have locked in if you have been using my teams.

No. 4 Kevin Harvick $28.00
Harvick is a pretty good restrictor-plate racer. Harvick last won here in 2010 and I think he might just be due for another win. Kevin is starting 34th this week and that is great for a pick at a superspeedway. Can you win it from 34th? At Daytona you can win it from any starting spot.

No. 78 Martin Truex Jr. $22.75
Martin is the driver that is starting from the highest position on my team this week. Martin rolls off in 20th position and to be honest I would prefer if he were down around the high 20s. Beggars can’t be choosers, and we have Martin locked in at a $2.25 discount, so it makes his starting position easier to swallow.

No. 41 Kurt Busch $22.50
Kurt starts 28th this week, but don’t expect him to stay there very long. The Hendrick-powered cars put on a pretty impressive display in the second practice, capturing the top-eight fastest speeds. The Hendrick powered cars continue to show they have the big steam under the hood.

No. 43 Aric Almirola $20.75
Aric won here last year and to be honest that has very little to do with why he lands on the team this week. Aric’s iconic No. 43 will roll off 36th for the start of the race. Starting 36th there is pretty much only one way to go and that way is up. Lets hope Almirola can get up there and win this race like last year.

No. 26 Jeb Burton $4.75
Jeb will start 42nd and is super cheap… what more do you want? If he can keep his car out of trouble, Burton could easily finish in the top 15.

So that’s the back of the pack but still good team this week. Good luck everyone, because at the restrictor-plate tracks you’ll need some of it. As always, if you have any questions about your lineup feel free to leave a comment in the comments section and I will be checking and responding to any questions.

That actually looks really good I ran that team on some of my side teams.

Good analysis: thanks for the input!