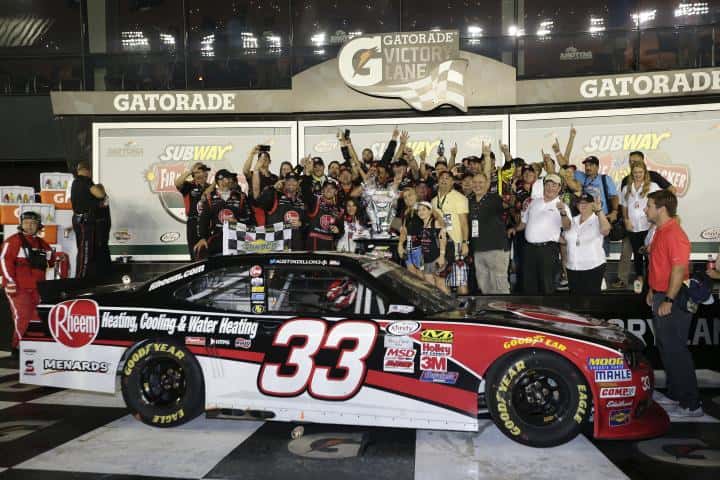 After a somewhat shaky start to the evening due to rains delaying the start to nearly 9 p.m. and a couple of early incidents slowing the pace, the Subway Firecracker 250 settled into a very nice rhythm Saturday night. Brian Scott led early and often from the outside pole. While polesitter Daniel Suarez did lead early (not without controversy), Scott appeared to be the class of the field.

Once the early race jitters faded away, Scott was in position to control the race from the front of the field, much like Dale Earnhardt Jr. has in the past in restrictor-plate races. However, it appears that Scott got greedy.

In the last few laps of the race, Scott attempted to block both lanes in order to keep his advantage and end his 185-plus race winless streak. Unfortunately, he misjudged just how fast Elliott Sadler was approaching him from behind with help from Joey Logano. Scott ended up turning himself into the wall off of Sadler’s nose, creating a mess on the backstretch that wrapped up a dozen cars. The wreck ended his night and took away one of his best changes to finally win a Xfinity Series race.

Scott’s teammate, Austin Dillon, was in the inside lane that Scott was trying to block as well. The wreck elevated the 2013 Xfinity Series champion to the lead. From there, the Cup regular held back a rather depleted field to take his third Xfinity Series win of the season with a car that he described after the race as being just average.

Despite being damaged when Scott forced him into the wall exiting turn 2, Sadler still brought his OneMain Financial Ford home in second. Even with the decent finish, Sadler was very disappointed because he thought he had the win in the bag. Chase Elliott was third, followed by Kasey Kahne and Benny Gordon in a career-best fifth.

Most of the championship contenders ended up being swept up in the crashes. Championship leader Chris Buescher got caught up in the first big crash exiting the tri-oval, then got penalized a lap for pulling up to pit. Regardless, Buescher was still able to finish a lap down in 12th. That was good enough to maintain the points lead. Ty Dillon was caught up in the same wreck, but was damaged quite a bit more. He was able to drive the car back to pit road, but lost four laps getting repairs and finished 26th.

Elliott didn’t get out of Daytona unscathed, either. He avoided the first big wreck, but took a trip through the grass on the backstretch during the second wreck. Luckily, the car was not damaged and Elliott was able to finish third. That allowed him to vault Ty Dillon and move into second.

Despite the swap and the crash, Buescher still expanded his lead up to 34 points over Elliott. Ty Dillon in third is the same number of points behind Buescher (43) as Elliott was after Chicagoland. Regan Smith (-67) is fourth, while Sadler (-71) moves into fifth by virtue of his “disappointing” second-place finish. Darrell Wallace Jr. (-88) drops to sixth, while Scott (-107) remains seventh. Ryan Reed (-119) moves up to eighth, with Brendan Gaughan (-122) close in tow. Suarez (-123) rounds out the top 10.

With Scott asserting his control over the pack, there were only nine lead changes amongst five drivers. Scott led 85 of the first 97 laps before crashing on the backstretch. The crashing led to only nine drivers finishing on the lead lap.

During much of Saturday night’s race, Kahne was an also-ran. Getting damaged in the first big crash and being slapped with a one-lap penalty for pulling up to pit seemed to finish off his chances for a decent finish. Fortunately for Kahne, the leaders weren’t done wrecking just yet.

Kahne made a nice move to avoid getting wrapped up in the crash and ended up being the Lucky Dog. That allowed him to make up his lap. Compared to a lot of the other machinery still on track, Kahne’s car still looked pretty good. On the final restart, Kahne was able to quickly move up to a fourth-place finish that probably shouldn’t have been in the taking.

For Harrison Rhodes, 2015 has been a bit of a tough go at times. He failed to qualify for the season opener at Daytona back in February. Since then, Rhodes has failed to post a finish better than 22nd all season (accomplished twice, at Michigan and Richmond). Saturday night saw him have an up-and-down night. After running well early, he lost the lead pack after green-flag stops and got lapped by the leaders.

A Lucky Dog put him in position for a decent finish and Rhodes responded by driving the No. 0 into the top 10. Rhodes did get spun out in the second big crash on the backstretch, but did not get that much damage in the incident from sliding through the backstretch grass. Once the smoke and dust cleared, Rhodes walked out of Daytona with a career-best ninth-place finish.

For much of the evening, Scott was the man to beat. Scott was able to move to the point from the outside pole and seemed to have enough speed to dictate just how everyone else raced. For a long while, Scott was looking good to finally claim his first career Xfinity Series win in his 190th start.

Towards the end of the race, Scott began aggressively protecting his position. While that is legal, it can be quite dangerous. The result was that he ended up binning his car on the backstretch and taking a lot of good cars with him. Scott ended up finishing 23rd on the evening, but he could have had so much more.

For Cale Conley, he’d probably wish the Subway Firecracker 250 never happened. He simply never could get anything going. Early on, Conley spun on the backstretch and slid through the grass. While the car didn’t appear to be hurt all that much, it really wasn’t competitive for the rest of the night.

Over the course of the night, Conley dropped a couple of laps to the leader before suffering another crash, this time in turn 4 all by himself. In that incident, Conley appeared to hit the wall by himself, then slid down the banking and onto the flat apron. The transition bent the nose and splitter, resulting in substantial repairs to the No. 14 Toyota.

While Conley still managed to finish the race, he did so nine laps down in 32nd.

This week’s underdog performer of the week is Gordon, who debuted the brand-new Performance Energy Group team on Saturday night. Using equipment acquired from the former Vision Racing team, Gordon qualified 20th, raced up into the top 10, then lost the draft after the one and only round of green-flag pit stops.

After Conley’s second crash brought out the yellow on lap 82, Gordon was able to make up a 35-second deficit to the leaders and make an adjustment. From there on, Gordon was the beneficiary of the two multi-car crashes that allowed him to move up into the top five. Despite getting caught up in the second big crash and making a stop for repairs, Gordon was able to bring his No. 66 home in a career-best fifth.

Of the double-duty drivers, Austin Dillon took home the trophy, while Kahne finished fourth. Ragan finished seventh. The rest were all wrapped up in crashes. In Cassill’s case, he was taken out in a rather bizarre incident under yellow when Jeremy Clements made a last-minute move to pit while Cassill was going to stay out. The two collided and Cassill spun while Clements suffered significant damage to his left front fender.

After a somewhat shaky start, the drivers really seemed to calm themselves down and make a real effort at racing each other courteously. Green-flag pit stops broke up the field and potentially could have left a pack of as few as four to five to decide the race amongst themselves since there was a good sporting chance that a number of drivers would have run out of fuel prior to the finish.

Conley’s crash that brought out the yellow on lap 82 closed everyone up, and it was as if a bunch of hounds were released. The aggression went up by several orders of magnitude. While Scott was continuing to control the race from the point, three-wide was the name of the game. That can’t last forever. Anyone who saw the last 50 miles of the Daytona 500 earlier this year can attest to that.

The two big crashes towards the end of the race resulted in a number of drivers we don’t ordinarily see up towards the front of the field getting their time in the sun. However, since so many of the major points contenders were caught up in one or both of the big crashes, there wasn’t all that much movement amongst the top drivers. Elliott leapfrogged Ty Dillon to move up to second in the standings, but he’s still 34 points behind Buescher.

NBCSN’s first Xfinity Series telecast drew high marks from fans not only for its professional presentation, but also the use of NASCAR Non-Stop, their new side-by-side commercial setup that in practice is very similar to what is used on Verizon IndyCar Series broadcasts on the channel. The rest of the season should see similar innovations in use.

That was a race? Lets see, mostly single-file running, nobody could pass, the outside line was stagnant, whoever was in front stayed there, unless they did something stupid (Scott blocking Sadler), and lead changes only occurring during pit stops.

If tonight’s Cup race is anything like that, and I pretty much know it will be, NASCAR has a bigger problem than dealing with fan anger over a piece of cloth!

Get ready for the demo derby during the gwc. Brian’s arranged it already. He doesn’t have to phone it in from the bar. Gotta give Johnson his chance, unless he’s leading at the end.

Well that win Dylan got was like him getting the Xfinity trophy two years ago, undeserved and the same arrogance was show 2 years ago…like he earned it. He owe Brian Scott a very big thank you. That had to be the worst display of blocking I have ever seen. Too bad, look like Sadler and Logano had a good run on Scott, would have been an interesting finish. Would have like to see Elliot pull it off.