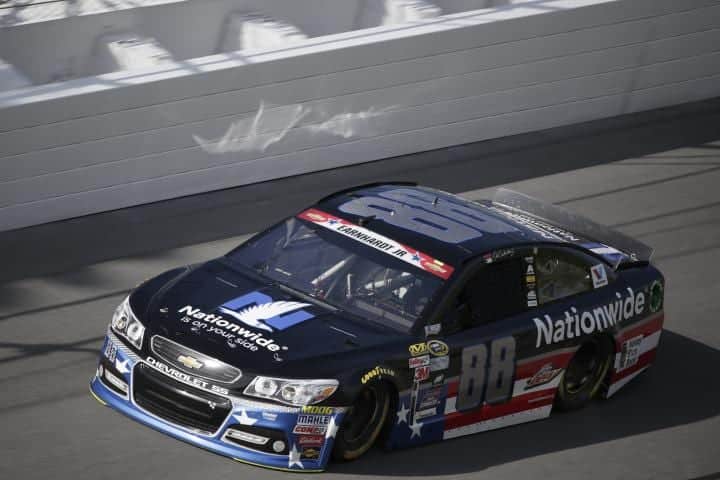 Restrictor-plate racing is definitely a skill in itself, and this week, one driver reminded everyone that it’s a skill he has. Trevor Bayne has struggled in his first full season in the Sprint Cup Series but he had a strong race Sunday night, contending for the lead late and staying in the picture to pick up a ninth-place finish. Bayne pulled the bottom line almost to the front before Sam Hornish Jr.‘s spin brought out the caution and halted the No. 6 car’s forward momentum. While Bayne might not have had enough horsepower to win, he certainly showed the car had enough driver to take it to the front.

It’s restrictor-plate racing; that means the possibility of being taken out by someone else’s mistake increases greatly. The craziness started early this time around when David Gilliland tried to block Clint Bowyer, triggering a 10-car crash on lap 3.

Another multi-car incident happened just past halfway, on lap 85 triggered when Kyle Larson got loose and turned Edwards. The No. 19 car then spun back across the track and collected Brian Scott. Three additional cars were involved as well.

Next, Kasey Kahne took the air off of Matt Kenseth coming off turn 4 and from there, it was on in the middle of lap 106. All in all, 11 cars were scored by NASCAR as involved; the total was actually higher, others suffering damage trying to avoid the melee.

But the biggest, scariest wreck came as the field took the checkered flag. Denny Hamlin got sideways from contact with Kevin Harvick while battling for second; most of the field was involved. Austin Dillon‘s car was thrown into the catchfence and came to rest near pit road with only the roll-cage somewhat intact. Three fans suffered minor injuries from debris. Dillon walked away (a testament to the safety of this generation of racecar), but the crash was still a reminder of what’s wrong with plate racing.

In the end, it’s hard to blame anyone for the product of restrictor-plate competition because it’s the nature of the game when drivers can’t get away from one another at close to 200 mph. Unless it’s blatantly intentional, chalk all these incidents up to the nature of the beast.

Where… did the polesitter and defending race winner wind up?

Dale Earnhardt Jr. got the pole by virtue of a rainout of the scheduled Saturday qualifying session, the field being set by the speed chart in the weekend’s first practice session instead. That was a harbinger of things to come, and Earnhardt would finish the night right where he started – in first place.

Aric Almirola won a rain-shortened version of this race a year ago, giving him his first and only Sprint Cup win to date. He had another strong run going until getting collected in a multi-car crash on lap 106, sending him to the garage for an early exit in 34th place.

Who thought starting a major sporting event well after 11 p.m. on a Sunday night was a good idea? There was a reason the summer Daytona race was run at about 11 a.m. for so many years: it’s a lot less likely to rain then. Scheduling the July Cup race on Saturday night was one thing; at least they could race Sunday if it rained. But running on Sunday at 7 p.m. ET during a season where rain is expected at that time of day? Just not smart for NBC. Even less smart was insisting on racing Sunday night at all costs. You wouldn’t see a Major League Baseball game start at nearly midnight because it just doesn’t make sense. They’d lose TV ratings and stadium audience playing a doubleheader the next day, but that’s what they would do nonetheless. There was no good reason to schedule the race Sunday night, no good reason not to postpone until Monday, and hopefully the schedule next year will put it back on Saturday or Sunday morning instead.

On the flip side, NBC deserves props for some parts of the broadcast. Jeff Burton and Steve Letarte were both strong in the booth, particularly Letarte. The ticker at the top of the screen moved at a good speed and provided other useful information. The network showed on-track incidents numerous times and from different angles. They still need to give some more airtime to what’s going on behind the leaders, but we’ll see whether that improves at Kentucky, a non-restrictor-plate track. Overall, it was a solid broadcast, much better than FOX provided this season.

Why… did Earnhardt Jr. win the race?

It sounds simplistic, but Earnhardt clearly had a car that was a cut above the rest of the field, with the possible exception of his teammate Jimmie Johnson. Earnhardt drove a smart race as well, blocking when he needed to but knowing better than to take a second shot at a move you only get to make once. The driver of the No. 88 Chevrolet also nailed his restarts when he had to. It was a dominant performance from a veteran who owned the plate tracks early in his career, scoring his 10th career plate-racing victory. Following a win at Talladega this spring, it’s safe to say that Earnhardt has rediscovered his mojo on the superspeedways.

Casey Mears; Germain Racing: Mears is probably the best plate racer among this group, so it should be no surprise that he was in contention for a top-five finish until getting shuffled on the green-white-checkered (11th). Still, his No. 13 team had to overcome a problem that could have been disastrous to get there. Cup cars have a sensor on the brake that will shut the car off if the driver hits the brakes too hard while still on the throttle. It’s designed to stop a car when its throttle has hung open, but Mears’s sensor was a little too sensitive during the race, causing the car to shut off when he’d get in the gas after touching his brakes. The crew was able to fix the issue under caution and keep their driver in contention. The race was probably their last, best shot to make the Chase, but they have shown some improvement this year just the same.

Landon Cassill; Hillman-Smith Motorsports: Cassill just might be the most underrated driver in the garage, and he showed what he’s made of this week. When the cars are more equal, Cassill can race with just about anyone, and he did so this weekend, running as high as the top five as the race wore on until fading to 13th.

Justin Allgaier; HScott Motorsports: Allgaier was in stealth mode this week, racing his way quietly through the first part of the race and showing up in a big way at the end. Allgaier made his way into the top 10 as the race drew to a close, in contention for an upset victory until Kurt Busch muscled him out of the way on the GWC. He got shuffled back but still wound up a respectable 18th.

nbc had macy’s july 4th fireworks show on saturday, when it would have been an optimum time to run the cup race.

have to see how mother nature treats nbc this coming weekend. right now, who knows, all i know it’s been a very wet summer, so far.

race ended 1.5 hrs before my alarm went off. i turned off the rain delay coverage at 9 pm. sleep won out over watching na$car. local news informed me of the horrible wreck and injuries at the track at 4:30 am.

plates and g/w/c do not mix well.

Commentary was frequently nonsensical. After one pitstop the commenter said that Junior had “lost a couple of spots” but showed him coming out second. On the restart they showed him as the leader. Prior to the race they were talking about how the cars would have no problem with handling and that cars which “slicked up for speed and reduced downforce” would have the advantage. During the race, every time a car spun out they blamed a loss of air and talked about how “that shows that these cars are having a handling problem,” and yet they continued to say that cars should not take oin new tires. Much of the time it sounded to me like the mouth was simply disconnected from the brain.

One word for NASCAR, Daytona, and now NBC: karma.
They messed with the date for the 500 and already twice it has been run late into the night.
Now they mess with the date for this one and another summer race ending after last call. I think this is at least 3 or 4 times in the last decade or so IIRC.
Can NASCAR control the weather? No but they’re sitting in Daytona Beach and can’t figure out that running at Daytona in July makes about as much sense as running at Pocono in mid-January.
NASCAR continues the drip toward irrelevance.

I found the booth to be arrogant and very bias. Big shocker. Same story different people NBC is not better than Fox, (Waltrips nothwithstanding). The agenda must be pushed. Horrible race, horrible decisions all around.

One question that was answered long before this race is that Chevrolet in general has a significant power advantage this year and Hendrick has the most Chevrolet power. There wasn’t much doubt that a hendrick car was going to win the race. The only way Jr was going to m loose was a mechanical failure or some weird accident. And if that happened the 48 would win.

Keep in mind Lou that Chevrolet is now NASCAR’s partner for the Daytona Rising project. No independence issue here, just move along. I personally do not follow one auto manufacturer over another but I do get bothered by the close relationship that NASCAR has with Chevrolet as I feel that the sanctioning body should be independent of the auto manufacturers.

As far as the coverage went I found after watching the Saturdays race and Sunday’s coverage until just before 11:00 (I get up at 4:30 for work) that it was worlds better than Fox. Whether they were at the top of their game or not it seemed to me that they were really trying to cover the race unlike the constant bleating from the Fox gang.

At least I didn’t have to listen to Mike Joy !!

The Hendrick domination is very suspicious plus Brian France and Rick Hendrick being best friends doesn’t help.
Chevy has been clearly given an advantage by Nascar and the 88 car could pass at will just make it obvious that something isn’t right. Ford needs to pull out because they are never going to amount to much if Hendrick keeps getting favors.