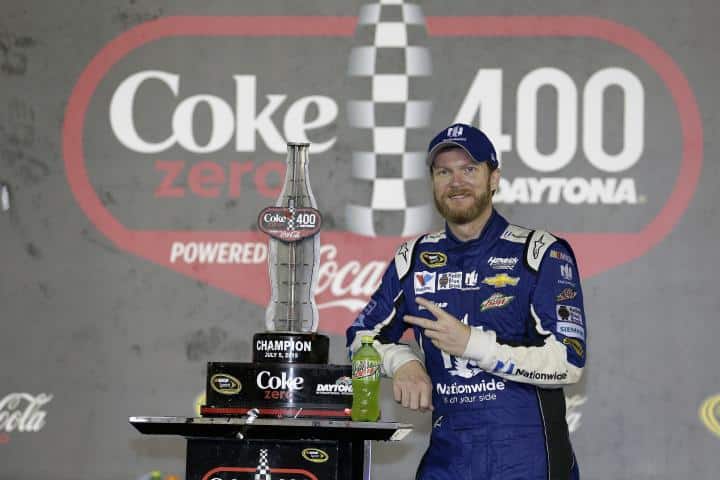 The last lap of the Coke Zero 400 at Daytona International Speedway almost turned into a nightmare as one of the most brutal accidents in the history of the speedway sparked behind race-winner Dale Earnhardt Jr.

“That scared the hell out of me, I’ll be honest with you,” said Earnhardt of the final lap accident in Victory Lane.

As the field came to the checkers, third-place Denny Hamlin spun off the front bumper of Kevin Harvick in front of the massive three-wide pack. Nipping the front of Austin Dillon’s car, the No. 3 was launched into the tri-oval catchfencing, which caused the Chevrolet to virtually split in half and tumble to a stop just yards away from the impact zone before being hit by a spinning Brad Keselowski.

Dillon emerged the ball of sheetmetal as crew members from a few teams ran over to aid a possibly injured Dillon, who suffered only a bruised tailbone and forearm. A total of 13 spectators were checked out after the wreck; eight declined treatment, four were treated at Daytona and one was transported in stable condition to a local hospital and later released.

“It’s just part of racing,” said Dillon, who crossed the checkered flag in seventh before taking flight.  “Everybody is pushing for all they can. Tight pack. People were pushing. It was a wad at the end.”

Earnhardt saw the war zone develop in his mirror.

“I saw Denny get turned, that’s kind of how it started,” said Earnhardt who picked up his 25th career Sprint Cup win Monday morning. “That was terrifying to watch. You know a wreck like that has got such a high potential for someone to get injured and you saw the car get high and get into the fence and you’re just worried about everybody else in the grandstands and all that stuff.”

Approaching 3 a.m. on the east coast, the rain-delayed 400-mile event went into a green-white-checkered finish to settle the victor. Earnhardt was the class of the field from start to finish as the No. 88 driver started on pole after qualifying was rained out and led 97 laps en route to victory.

The Talladega winner, once clear of teammate Jimmie Johnson with two to go, made a few blocking moves on the final lap before taking his fourth win at Daytona.

Johnson trailed Earnhardt and was able to hold off the snarling pack to make it a 1-2 sweep for Hendrick Motorsports. The six-time champion was shaken after seeing the last lap crash in his mirror and later watching the replays, calling the lucky escape for Dillon “remarkable.”

“I just thought [Dillon] was backward and that’s why the car took off,” Johnson said. “Then to see the replay there and see there was a little contact with the front of the [No.] 11 car and that sent it into the air. And the fact that the car climbed altitude like it did and went in the fence; I’ve never seen anything like that. And then how fast it stopped.

“Happy to know that Austin is OK and the fans are [too]. Just a scary scary moment. I saw it all take place in the mirror and it hit me hard. I thought something really bad happened.”

Despite spinning after contact from Harvick, Hamlin crossed the line third. The Joe Gibbs Racing driver said Harvick was just trying to help, but it just “wrecked a bunch of stuff.”

“The [No.] 4 was trying to push me to the line and he had us jacked up,” Hamlin said. “None of us were going to win the race from second or third.”

Sunday night saw a race with 22 lead changes among 13 drivers. A highly competitive race with two- and three-wide racing common, the event was a long night for those who stayed at the track or watched at home. However, the impacts seen by Dillon and the dozen other cars across the checkered flag will grab headlines and dominate the week leading up to Kentucky race weekend.

“Austin took one heck of a ride,” Hamlin said. “It (the catch fence) kept the car in the race track which is good. I rode in the ambulance with Austin and he said he felt fine.”

Jeff Gordon, competing in his final race at Daytona, called the racing “wild from the start” as he came home sixth.

“That was a crazy one,” Gordon said. “I love Daytona, this place has been amazing for me. I can’t believe this is my final race here but after going through that experience, I’m glad I only have one more restrictor-plate race left.”

For the second week in a row, Martin Truex Jr., who brought a aggressively fast No. 78 at Daytona in February, found himself in the garage as he was part of a 12-car crash off turn 4 early.

“Just another situation where we were running outside there minding our own business and just like practice,” Truex said. “got caught up in somebody else’s wreck.”

Drivers like Carl Edwards, Kyle Larson, Danica Patrick and Sam Hornish Jr. experienced multiple accidents throughout Sunday night and into Monday morning. With multiple big ones before the last-lap carnage, there were not many cars left to shine during post-race talk.

Kyle Busch entered Daytona with a win in his pocket after Sonoma last week and 136 points to gain if he has any chance of making the Chase. Although he hit the wall on lap 17  and went two laps down, Busch got back on the lead lap and came home a not entirely devastating 17th.

Once again a debris shower onto the fans in the stands. Don’t know how to stop it, but if they don’t its only a matter of time before someone is seriously hurt.

While a debris shower is bad, we should all be very, very thankful that the catch fence did its’ job. Had it failed, you would have had a 3500 lb, 200 mph missile into a very crowded section of the stands. I am not sure what the finished Daytona Rising Project will look like, but those fans need to be 20-25 feet above the top of the wall minimum. Amazing that there were no major injuries on either side of the fence.

I remember the fatalities at Charlotte when the Indy race was run there back in 1999. The height of the catch fences was increased at many tracks afterwards and that has helped. There will always be some risk that fans can be injured at a high-speed race, but the fact that the fans last night only suffered minor injuries is amazing considering the amount of shrapnel flying off the cars. The accident was brutal and thankfully no one was seriously injured or killed.

I agree there will always be a risk. But, at the angle that car was going, had the fence failed there would have been double digit fatalities.
The fence did not fail (bravo to the engineers). But, if pack racing continues, that many fans sitting next to a high speed curve (tri-oval) is crazy.
Bring back tandem racing. Not the best, but it does reduce pack sizes.

at least this time no axle or engine went into the stands. very horrible crash. i get up for work at 4:30 am and turned on the local news here in ga, and that story was a top story of the morning. they mentioned that jr won after they did the story on the crash.

they need to really address slowing the cars down without the plates. g/w/c at a plate track is a recipe for disaster. i can only imagine what richard childress thought when he was the 3 going airbourne. there were angels watching over that car and track this morning.

was very heartwarming seeing crew members from other teams running out to render aid (prior to first responders arriving).

I wonder if the more than usual wreckfest had something to do with the stupid idea to put the spotters lower with the new design. That should be fixed, spotters should be as high as they want to be when spotting that large field. What a crappy weekend!

There were two big wrecks in the Cup race, which sadly is not that unusual. The spotters had nothing to do with the wreck at the checkers. Merely a situation of trying to get every position they can.

Obviously, I am aware of how Daytona works, but where the spotter stand now is they are at a disadvantage for several reasons, nobody could have stopped Harvick from being Harvick and getting into Hamlin but there certainly seemed to be some merit as to the full availability the spotters used to have compared to what they have now. The spotter(s) are still talking about it, as it is a impediment to them providing the best feedback for their drivers. Hopefully some changes will be forthcoming.

The way the complete motor and transmission detached itself from the car and slid across the track was scary. Imagine the carnage had it gone into the spectators. I don’t watch plate races anymore, only saw the highlights on Sports Center I believe. Time to do something Nascar.