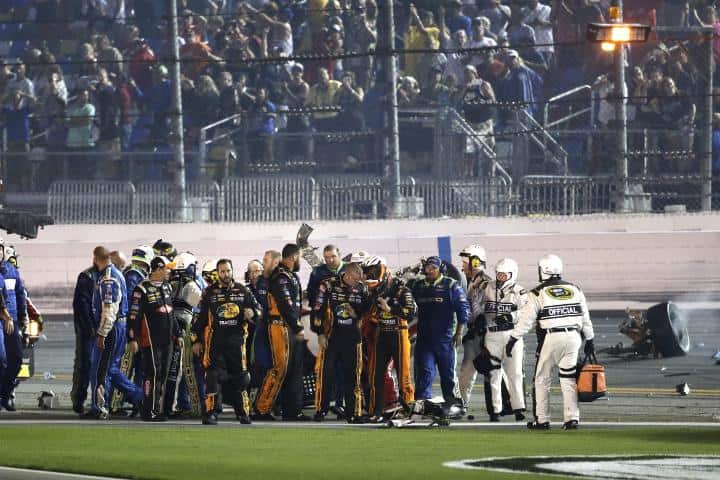 We’re going to cut to the chase right here. The ride that Austin Dillon took into the catchfence early Monday morning at Daytona International Speedway was one of the scariest-looking crashes I’ve seen in over 25 years of either watching or being involved with the sport. There were few, if any people at the track who disagreed with that assessment.

BOWLES: Will Wreck Lead To Catalyst For Change?

However, I’m not here to talk about the crash itself. What I noticed, even before I got the full idea of Dillon’s ride, was the reaction by Dale Earnhardt Jr.’s crew. Keep in mind their man had just won the race in dominant fashion. Under normal circumstances, those guys would be rightfully jubilant. Instead? They didn’t give a hoot. Jumping over the pit wall, they sprinted to Dillon’s car, which came to rest upside down in a small patch that had been paved over after the Daytona 500.

Earnhardt Jr.’s crew was joined by Casey Mears and AJ Allmendinger’s at the scene. Along with some of the emergency workers, they checked on Dillon’s condition, then helped to extricate him from his stricken Chevrolet SS. Such a site is quite rare in NASCAR, but not unprecedented.

Jeff Burton, who made his debut as a full-time Sprint Cup race analyst on NBC Sunday night, admitted on-air he was legitimately scared for Dillon. That’s a rare admission. Fear is something that really isn’t talked about in motorsports, other than it being a sign of weakness. Having said that, Burton can relate to the position that Dillon was in better than most other commentators. He has experienced a crash that prompted similar emotions from pit crews.

Back in 1994, Burton was by far the most consistent of the rookies in the then-Winston Cup Series. In the SplitFire Spark Plug 500 at Dover, Burton was very quick and managed to rise up to the lead on lap 182. However, just a few laps later, Burton blew a right front tire and crashed hard exiting turn 4.

Knowing that Dover was very fast, holding little chance to scrub off speed after such a crash, everyone feared the worst for Burton. A small battalion of crew members from a number of assorted teams came to Burton’s aid after those tremendous hits. Members of Jeff Gordon’s crew got to the car first, finding it on fire followed by members of Burton’s, Brett Bodine and Rick Mast’s crews. They were able to extricate Burton from the flaming Raybestos Ford and carry him to safety before emergency crews could even reach the car.

The reason I reference these nasty wrecks is that they both reinforce the family nature of NASCAR and motorsports in general. While the number of people who are on the road each week just for Sprint Cup Series teams number in the thousands, they all really care deeply for each other. While TV might glorify the whole “Boys, Have At it” philosophy that’s been around for the past few years, that’s more of a spur-of-the-moment frustration fueled by adrenaline.

In reality, most of the people you see in the pits and the garage see each other all of the time. It’s hard to travel with the same couple of thousand people for nine months and not generate some kind of camaraderie. It’s like a small town. Everyone knows everyone else, and their business. Of course, there are good and bad sides to that. However, if something terrible happens, there’s more than likely going to be people lined up around the block trying to help out.

That camaraderie carries over to drivers as well. Many of them are quite close, their motorhomes parked next to each other in the infield each week. Maybe they’re not having dinner parties at their houses or getting together to play some FPS games (although I’m sure that some drivers, like Ryan Blaney and Darrell Wallace Jr. might actually do that). However, they all still care deeply about each other. No one wants to see anyone get hurt.

Post-race coverage here in Daytona saw most of the drivers walking around in a sense of shock. Jimmie Johnson admitted during his post-race press conference that he was surprised to hear Dillon was alive after the crash, let alone up and walking about with only a bruised tailbone. Even Earnhardt Jr. was not his typical, upbeat self. His voice was trembling for much of the winner’s press conference. While he did try to lighten things up, it just wasn’t working, given the circumstances.

Recent events with another job I have, writing over at Lebanon Valley Speedway in Pennsylvania have reinforced that mood as well. Last week, 43-year-old Shawn Rivers was killed at Lebanon Valley in an unfortunate accident during the annual Eve of Destruction. The details of the crash are very sobering and we won’t get into it here other than to say that it was frightening to watch. Being there and seeing the fatal crash in person is a terrible experience. It takes the sails out of everyone in attendance.

That said, the plan for Saturday night’s regular night of racing at Lebanon Valley was to pass around helmets in the pits and in the grandstands to take a collection for Rivers’s family. In addition, as opposed to the traditional moment of silence, there was going to be a “moment of ground pounding.” The big block modifieds at Lebanon Valley rumble the ground when they are in operation, and Rivers’s family believed that Shawn would have wanted it that way. The track agreed to do this tribute, but rains resulted in the card being cancelled. As a result, the collections and moment of ground pounding will occur this Saturday night (Jul. 11). In addition, an online memorial fund has been set up on YouCaring to help the Rivers family cover their costs. As of 5 a.m. Monday morning, the fund has raised over $4,800.

Members of the Rivers family have been overwhelmed with the assistance (monetary, physical and emotional) that they’ve received over the last week. That’s just one more example of how the racing community can come together.

Ultimately, Dillon’s crash is just one more example of just how scary motorsports can truly be. Believe me, it’s dangerous and always will be. But racing is not really like other sports. It’s a very caring atmosphere and, when you really get down to it that’s probably the best part of being involved in racing in general. The people involved in Sprint Cup and really almost every type of racing are not really that different from you or I. They may be in better physical shape, but they’re regular humans just like us with feelings. They can feel pain as much as they feel the pleasure of reaching Victory Lane.

Pain, along with feelings of relief were at the forefront early Monday morning. Thank God what we saw didn’t wind up far worse.

Well said, Phil. I didn’t see the replay until this morning since I went to bed before the race was run. I was shocked to see that wreck and very happy & relieved to see Austin get out of that car with the help from the teams.