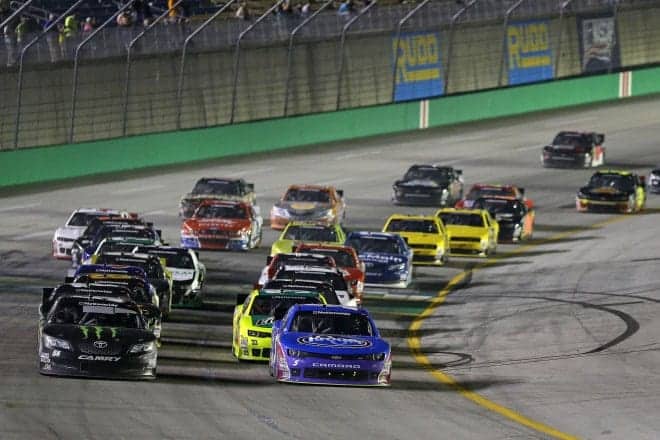 After a wild evening and points shakeup in Daytona, the NASCAR Xfinity Series is switching gears and heading to the midwest for a hot summer race in Kentucky.

Four weeks after returning the victory lane in the Xfinity Series, Kyle Busch will head behind the wheel of the No. 54 Monster Energy Toyota. Busch will be joined by series regular Daniel Suarez in the No. 18 Toyota and Kyle Busch Motorsports driver Erik Jones in the No. 20 Toyota to complete the Joe Gibbs Racing stable.

Fresh off his victory in the Coke Zero 400, Dale Earnhardt Jr. will make a rare NXS start on Friday, piloting the No. 88 Hellman’s Chevrolet for his own JR Motorsports team. Earnhardt, 40, has made three starts in the series this year, with a best finish of third at Texas Motor Speedway.

Brad Keselowski and Paul Menard will drive the No. 22 and No. 33, respectively, bringing the list of drivers earning NASCAR Sprint Cup Series points entered in Friday’s race up to four.

The NASCAR Xfinity Series will return to the 1.5-mile Kentucky Speedway in Sparta, Kentucky on Thursday, July 9 for two practice sessions before returning on Friday for Coors Light Pole Qualifying at 3:45 p.m. ET. Coverage of the Kentucky 300 will begin on Friday at 7:30 p.m. ET on NBC Sports Network.