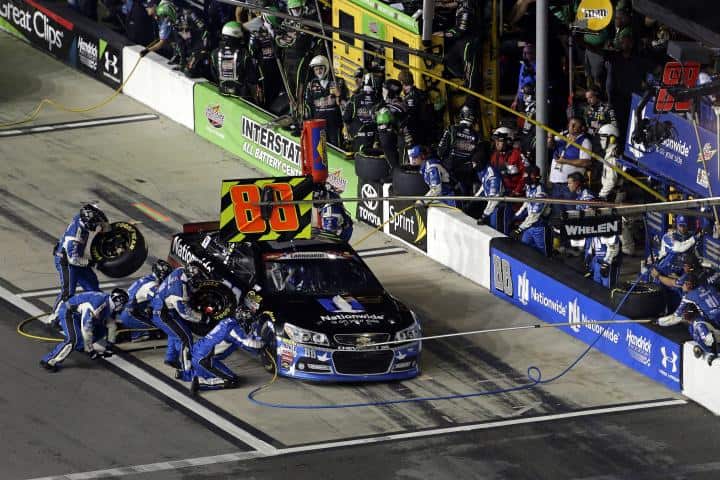 If you’re into endurance events, then the Sunday night/Monday morning race at Daytona was just for you. The drivers finally got the command to start their engines just before 11:30 p.m. Whether it was better to have a late-night/super early morning race or a Monday event just depends on your schedule, but here’s hoping you were able to watch this one, whether it was live or on the DVR.

Well, the hot topic this week will be safety after the finish-line crash that Austin Dillon, by some miracle, escaped with no injury and that the fans sitting close to the track escaped with only very minor injuries. And let’s just admit it here, in those tense 10 or 15 seconds after airborne Dillon’s crash into the catchfence, it was almost impossible to not to think, “not the driver of the No. 3 for Richard Childress Racing again.” But those thoughts never had a chance to take hold when crew members who ran out to Dillon’s car (or what was left of it) gave a thumbs up while Dillon was still upside down. The drivers, of course, understand they are in a risky business. It’s what they sign up for. The fans, however, while understanding there can be risk, should be well-protected. And while the catchfence held this time, here’s wondering if there shouldn’t be a second catchfence a few feet behind the first one, you know, just in case.

And by the way, yes, Dale Earnhardt Jr. won and he seemed a little shaken by the crash, saying several times in victory lane that he was thankful no one was hurt. During the race, Junior was the class of the field all night, with no one able to make a fast enough run to pass him and keep the lead. So give Junior some credit for using his car to stay out front of the trouble in this one.

It looked like early on that Kyle Busch’s Chase chances were going to take a big hit when he side-swiped the wall and needed to come into the pits for extensive repairs. But thanks to some well-timed cautions, he and his crew were able to make the No. 18 at least a little competitive, and he was on the lead lap for the late stages of the race. That left Busch with a 17th-place finish. And while he only gained eight points on his quest to reach 30th in the standings, he could have lost a lot more. He’s still 128 points behind Cole Whitt for that 30th spot, but Busch has to be happy he and his team gained at least a little.

Trevor Bayne was a big factor late in this race and it would have been a pretty emotional moment had he somehow found his way into victory lane at Daytona again. Bayne ended up finishing ninth, which is something he will have to take considering the disappointing season he has had as he sits 27th in points.

And let’s give Clint Bowyer a little credit here, too. He hasn’t had a great season, but he continues to grind it out and now, after the Sunday/Monday wreckfest, he sits 15th in points, which would put him in the Chase at the moment.

Carl Edwards does have his win and is pretty much set for the Chase, but it just wasn’t his night/morning at Daytona. Edwards was involved in two crashes, the first of which he seemed to recover from and at least stay competitive. The second one, while nothing like the race-ending melee, was enough to finish his night off when Brian Scott’s car somehow ended up underneath’s the No. 19’s rear end, nearly getting Edwards airborne himself. Edwards had to settle for a 41st-place finish.

Tony Stewart fans had one last realistic hope of him making the Chase this year (well, OK, maybe he can at Watkins Glen) given his record in July at Daytona. And while Smoke rode around in the back early on, he tried to become a factor late. But when he went high on the final restart, there wasn’t much help for him and he finished 14th with the most interesting part of his night driving under the airborne Dillon at the finish-line crash.

Rain, rain and more rain. The consequences were widespread. First, there was no No. 21 Wood Brothers car in the field, as Ryan Blaney did not make it in with qualifying be cancelled. Can we just pass a law, or put it in the NASCAR by-laws or something, that the No. 21 must race at Daytona as long as it is owned by the Wood Brothers?Of course, rules are rules, but it just didn’t seem right.

The next consequence of the rain was that NBC, on its first race in its return to broadcasting NASCAR had a lot of fill time. As in almost four hours worth from the time when the original green flag was scheduled to be waved. Now, let’s give them a little bit of a break here, being the first race and all, and most surely they will get better. However, nothing against the NBC crew, and even though I admit I get tired of hearing Darrell Waltrip at times on FOX, I missed their coverage on this night/morning.

Finally, there was work the next day for those of us who stayed up to watch the whole thing.

To have a hot/not edition after a plate race, especially that debacle called a race early Monday morning is sinful. Since when is luck a barometer of skill, and how does one take credit for luck or not?