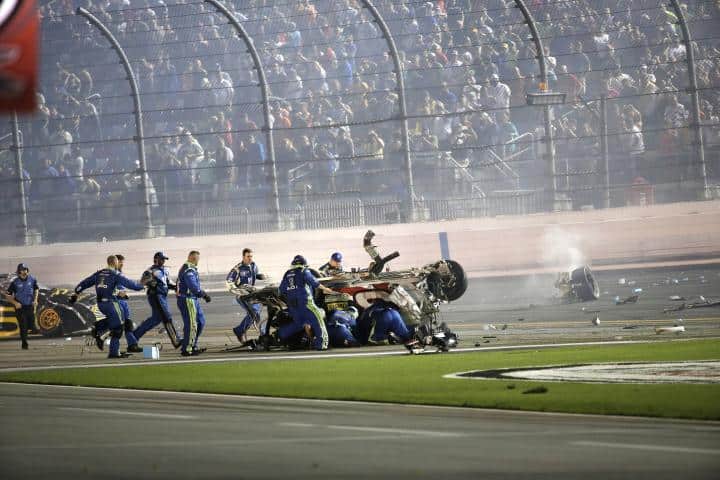 Less than 48 hours after Monday morning’s frightening crash, the driver that saw the wildest ride spoke out on Tuesday.

Austin Dillon discussed the crash that took place at the end of the Coke Zero 400 at Daytona International Speedway in a teleconference with media members on early Monday morning. The 400-mile event was delayed several hours after rain dampened the 2.5-mile oval in Florida. The Coke-Zero 400 got underway at 11:30 p.m. ET. and concluded just before 3 a.m. Monday morning.

Dillon said he knew things were about to get bad when Denny Hamlin got turned and threw sparks on the track. During the entire wreck, Dillon tensed up while gripping the steering wheel very tightly. While tensed up inside the car, Dillon said he did not know which portion of the track he was at.

“When we took the white flag, I was riding behind Jeff there and giving him a good shove down the back stretch just trying to gain as many positions as we could on the bottom line, and coming off of [turn] 4, felt like we were in pretty good position,” said Dillon. “I knew that we were going to have a good finish there, and getting ready to take a checkered, I think it’s going to be over. Usually right after you take a checkered, we’re starting to roll on the gas, we’re still wide-open right there, and the [No.] 11, when it got turned, it threw sparks everywhere. I kind of knew that we were in a bad situation at that point, when he was turned in front of us.

“The car, when he connected with us, it was kind of really quick at that point. I just remember getting launched up, and then the first violent part of the wreck was when we turned upside down. It just happened so quick, and I knew at that point I had already – it was going to be big.”

“Tensed up and kind of just really gripped the wheel hard,” Dillon continued. “When we hit the catchfence first, I didn’t realize kind of where I was. I knew the whole time where I was, but I didn’t know where I was on the track, if I was hitting get by a car or what it was because it happened so fast, obviously.

Once Dillon had come to a complete stop, the crash wasn’t over. Brad Keselowski, who hit oil while trying to get slowed down to pass through the wreckage, slammed right into the battered Chevrolet with Dillon inside. The North Carolina native described the hit.

Several crew members, including crews belonging to race winner Dale Earnhardt Jr. and among other Sprint Cup Series teams, ran onto the track to check on Dillon after the crash. Dillon thanked the crews on his Twitter page around an hour later.

Want to thank all the guys that came out to the car to check on me. We compete against each other every week but we are one family #NASCAR

According to NBC Sports, Steve O’Donnell says NASCAR will not penalize those crew members. However, because it caused some confusion, NASCAR has taken those crew members hard cards until they meet with officials to go over the safety aspect of the situation. They will get their hard cards back immediately following the discussion.

“I’m still strong and confident, and I am,” said Dillon in a media teleconference. “For people at home, I guess I don’t really know how to explain it. It’s just a mentality that I have as a driver. I think all the drivers do, that they don’t want to get out of their car. It’s what they love to do and be a part of. I love what I do. And if I was shaken, I promise you, I wouldn’t be getting in that car next weekend. I’m a pretty honest person when it comes to things, if I’m hurt or don’t feel good, I’ll pretty much come outright and say I don’t. But I feel fine, so why wouldn’t I?”

Blaming things on Daytona International Speedway is not the answer for Dillon.

“I feel like it’s a racetrack that has done its job to put on good races,” continued Dillon. “We just have to keep developing to keep our stands safer, our drivers safer, and do what we can as a sport to develop and bring new technology, like I said, to keep it safe.”

NASCAR will take what’s left of the No. 3 Chevrolet back to its R&D center for further evaluations in Concord, North Carolina.