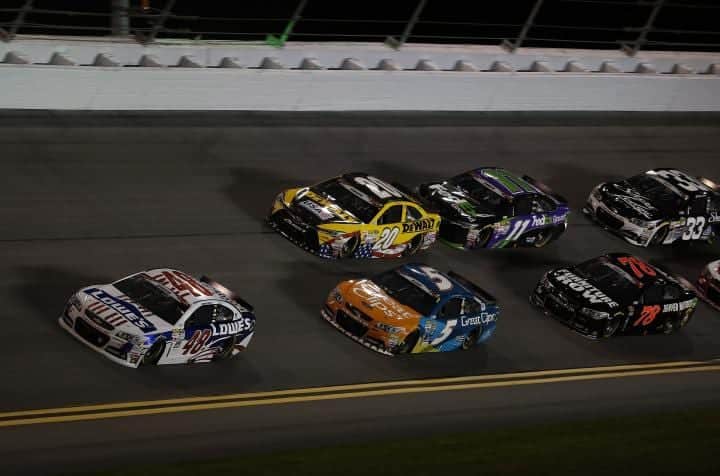 It’s hard to get NASCAR fans to agree on everything, and it’s even harder for them to all agree on something positive. Between the Chase, the competitors, and the various racetracks, everyone has an opinion and the only thing everyone agrees on is that it could always be better.

Then NBC comes along, returning to the sport after a nine-year hiatus, to what amounts to a nearly unanimous consensus (or as close as you can get) from race fans: It’s great to have them back.

Those are just a few of the positive comments NBC received for the weekend’s coverage. And before you say those are just Earnhardt’s diehard fans agreeing with him, if there’s anything I’ve learned about race fans, they won’t miss out on an opportunity to criticize. In this case, they didn’t see the need to.

Now, I will say that there were a few criticisms and comments, but not near to the level that I’ve grown accustomed to seeing when it comes to the television broadcasts. Fans take those things seriously, and hold extraordinarily high standards.

A common theme I noticed when it came to the comments regarding the broadcasts (including the Xfinity Series race, practice sessions, qualifying, etc.) was the clean, no-nonsense approach of the broadcast team. They explained concepts without talking down to fans, told intriguing, unique stories, and really presented each event to the race fans without talking at them.

Now, granted, I’m not one of those individuals who takes every opportunity to nitpick the broadcast. I enjoyed FOX’s coverage just as much as I enjoyed NBC’s and think they bring their own unique qualities. I don’t mind the Waltrip brothers’ antics and love that they have their own fun. But I also enjoyed NBC’s very simplistic broadcast and the balance they had between fun and professionalism. I really don’t have my own preference.

However, where I think NBC really shone was in the difficulties they faced with the Sprint Cup Series broadcast this week. With a three-hour rain delay, the broadcast team was forced to come up with interesting conversations and feature stories that would keep their people engaged.

In my opinion, they succeeded. The stories they ran on Kyle and Samantha Busch, the wives and girlfriends of the sport, the “Lightnin’” interview, and the other historical discussions and montages that were displayed were all top-notch, informative, enlightening, and sometimes, yes, even emotional.

One of the pieces I enjoyed the most was watching Dale Earnhardt Jr. relive his Daytona July race win in 2001 in the first race at Daytona since the death of his father. Former crew chief — and current NBC analyst — Steve Letarte watched alongside him. It was so incredible seeing Earnhardt’s reaction and everyone watching was either grinning ear-to-ear or crying. Or both.

However, aside from the actual racing, one of my favorite parts of the racing was listening to Kyle Petty and Dale Jarrett talk about growing up at the racetrack together and their experiences as children of very successful drivers. Given the rain delay (s… the Xfinity Series dealt with rain too), there was plenty of time to relive some of those moments. One comment that gave me goosebumps was when Petty mentioned he would play with a group of kids one weekend only to never see them again. Why? Their father was killed in a race and they had no more reason to come around. It wasn’t the first time I had heard that story, but it still was a very poignant comment. All the same, I could listen to Petty and Jarrett swap stories all day long and that’s my choice of rain delay conversation.

Finally, I loved the in-studio driver interviews. The highlight has to go to Kevin Harvick spoiling his son Keelan’s birthday present.

OMG @KevinHarvick!!!!!! Did ya really think Keelan wouldn't be watching your interview?!?!?! #surprisedruined

Still, let’s get back to the racing part. Like I said before, NBC was already in a bad position. Either broadcast a race in the middle of the night or postpone until Monday morning or later in the afternoon. Either way, viewers are limited. Considering how long everyone was on air, I expected the on-air talent to sound a little weary by the end of the race.

But, honestly, everyone was able to maintain an excitement level throughout the entire race. Rick Allen is excellent at adding intrigue and excitement to the broadcast. Additionally, I always feel like I learn new things from Steve Letarte and Jeff Burton’s perspective is invaluable. Again, I think what fans really like about those three is that you can learn new things from them without feeling like they are trying to cater to a “look, something shiny!” audience. I’m all for teaching potentially new viewers about the sport, but it’s even better when current fans can learn something new, too. I think Letarte and Burton are excellent for that during the broadcast.

Ditto all of that for the Xfinity Series race on Saturday night.

I sometimes feel like I’m in the minority in that I like all of the broadcast teams and really, really look forward to the restrictor-plate races (minus those awful, horrific wrecks like the Austin Dillon incident). I know not everyone liked the race, but almost everyone enjoyed the broadcast. If NBC can make the hard-to-please race fans enjoy their coverage, that’s a pretty big deal.

I saw no difference in the presentation compared to Fox…except the absence of the Waltrips. The crew still was shilling and towing the wonderfulness of Nascar and the air they breath. I gotta tell you, the HMS “stories” from jabber jaws Stevie (never lets you forget he was Jr’s crew chief) was tiring. NBC needs to know not everybody is enamored with Jr., his life story or anybody else in the HMS stable, that includes the satellite branch. Spread it around bias is not a good thing. And Jeff Burton for years has not eaten a slice of humble pie, now might be a good time.

“Now, granted, I’m not one of those individuals who takes every opportunity to nitpick the broadcast. I enjoyed FOX’s coverage just as much as I enjoyed NBC’s and think they bring their own unique qualities. I don’t mind the Waltrip brothers’ antics…..”

I quit. You MUST know best Phil. And the other people that frequent this blog that are appalled at what FOX has done to NASCAR TV broadcasting are wrong too. Hey! Here’s an idea. Use this column as your cover letter for a job at FOX. Oh, and just so even YOU get it, I enjoyed the NBC broadcast like I haven’t enjoyed a NASCAR TV broadcast IN YEARS.

Summer wrote this article, not Phil.

A note to all, this column was NOT written by Phil rather it was penned by Summer. Take this with a grain a salt and let’s how Phil is back next week.

I thought the broadcasts both Saturday and Sunday were fine. Kyle Petty and Dale Jarrett and Jeff Burton bring something to the broadcasts without coming across like clowns and hucksters and Nascar/Danica apologists. Gee, who could I be refering to? Also, there were more wide-angle shots of the field and less close-ups of individual Fox-favorite cars that show nothing but sponsor decals.

Summer it’s perfectly okay if you like the homespun humor and buffoonish antics of the Waltrip brothers. Hey, I watch Duck Dynasty for the very same reason.

“Like I said before, NBC was already in a bad position”
Ugh, NBC put itself in this bad position by insisting that this race be run on Sunday night. As they say, you reap what you sow.

I enjoyed NBC’s coverage all weekend. Their graphics package is a welcome relief from FOX’s. My only gripe, and this goes to FOX too, is at some point in a long rain delay show a classic race or something. You can only interview so many people or replay the same pre-taped segments. As the last week showed, NBC has a nice library of classic races to show. I enjoyed Allen, Burton and Letarte in the booth. They also have plenty of experience on their team. Though, they paid a price for putting the race on Sunday. I’m glad I took Monday off.

Except there was no classic race for NBC to show. This was their first race under the new deal. They might be able to dig into the archives for a race they broadcast over a decade ago, but the problems with that is the fact that the broadcasters would be completely different, and fans could/would be confused with the broadcast. Remember the debacle last year(?) where Jimmie Johnson was congratulated for winning the replayed race from the year before because people thought that was the actual race instead of a delay filler.

Was a breath of fresh air..Some very minor errors by anchor which will improve..Steve & Jeff were good & better than any product shilling waltrip(team owners should NOT be doing the broadcasts except as the odd guest appearance) …Noticed NBC was not going NEAR confederate flag issue

Let’s be honest. Nobody on the east coast saw the end of this race unless they were there. Horrible start time. Should have run it Monday.

Bill B
Reply to  Dd

Wow. I didn’t know that I was a “nobody”. Or maybe I hallucinated that wreck at the end of the race.

NBC and NASCAR(Brian France and Company). Perfect. These two losers can pat each other on the back as thousands of stock car racing’s fan base abandon the sport in droves. A horrible start time, empty stands, “green flag back in the air!” 500 times and a babbling Latarte. Yeah, NBC “deservedly welcomed with empty arm-chairs” is closer to the truth.

First off, where is Phil?, and this was not even close to the usual CPT article , I hope Phil will be back soon( no offense Summer) .

It should be noted, and this is an important piece of the pie, the production company that Fox uses is the same one that NBC chose to use for their return, and you might be asking why is this important? the production company is what actually brings you the race, they are the manpower behind the race’s , they provide all the equipment needed to broadcast a race.

Fox and now NBC both use Game Creek video, while ESPN used NEP, same as NBC did their first time.

Game Creek video, or any production company for that matter, might be the backbone for the manpower and equipment, but the network has control over how the broadcast is presented to the viewer. The network structures the show, hires the commentators/on-air personalities, and possibly the director(s) calling what is show on the screen (directors might be covered by Game Creek not sure about that).

Many of the complaints for Fox are typically about the Waltrips and how the race is presented (coverage, stories, and biases). I did not see the Cup race, but the Xfinity broadcast first impression was palatable. It will take a couple of races for them to find the groove, but from what I have seen they have started out on the right foot.