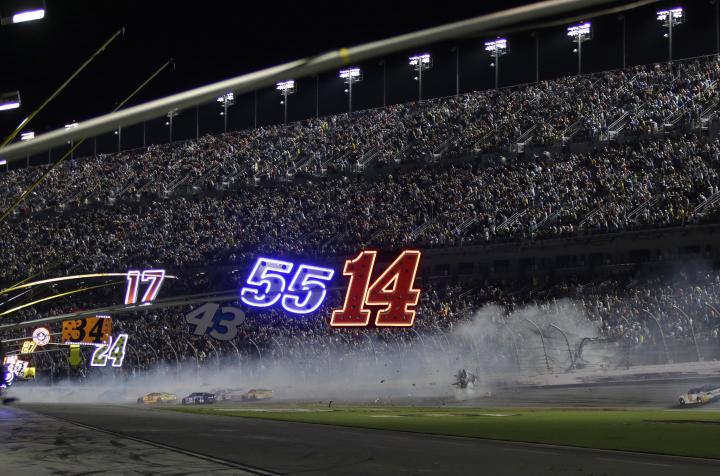 Contrary to popular belief, speed doesn’t kill; however, going fast has consequences and one of those is the danger when a fast moving object comes to an abrupt stop or, in the case of Daytona International Speedway this past Sunday night, when a car gets airborne racing for the win.

The knee-jerk reaction for some early Monday morning after Denny Hamlin spun into Austin Dillon’s No. 3 Bass Pro Shops/NRA Chevrolet and sent it flying into the catchfence was to scream, “Something must be done. People are going to die because of crashes at restrictor-plate races!” First, that is an overly broad and far-reaching synopsis to a complex problem. Second, it just shows some people’s inability to grasp the fact that auto racing is dangerous, but with continued safety improvement, the devastating effects from crashes that we’ve seen in the past have been limited.

When Carl Edwards went airborne at Talladega Superspeedway and debris from his car injured several fans, track operators and NASCAR officials met to make improvements that reinforced the catchfence. The same thing happened after Kyle Larson’s car went airborne at Daytona during the season-opening Xfinity Series race in 2013. Surely, after the dust settles and blood pressures return to normal, NASCAR and Daytona officials will meet again to make even more changes and improvements. Perhaps, one solution is to move fans further out of the perceived “Danger Zone.”

However, after watching video of all three of those crashes, it’s plain to see that the safety devices in place did what they were designed to do. Yes, the argument can be made that Larson’s engine went into the grandstands after his car punched through the crossover gate. But the catchfence is designed to keep the car from exiting the racetrack. In all three scenarios, the 3,500 lb. racing machines were tossed back onto the racing surface.

Were people injured? Yes. Did people die? No. If memory serves, the last fan to die at a racetrack was struck by lightning and even then some media members and NASCAR critics pointed fingers at track officials and the sanctioning body like they could control the weather. It’s safe to say, if NASCAR could control the weather, then Dillon’s crash wouldn’t have occurred at 2:41 a.m. Monday morning after a protracted rain delay.

Only one of the 13 fans evaluated by care workers was taken to the hospital, eight received no care and four were hit with small pieces of debris that the catchfence was not designed to stop. The only way to stop any and all debris from reaching the stands would be to have a solid fence made from clear acrylic, but that would significantly hinder the fan experience.

Looking back at the crash, there will be lots of scenarios discussed and probably some finger-pointing, as well, but the blame for this accident lies squarely on the shoulders of competition and the thrill of victory. As the field came around turn 4 on the final lap, the outcome of the race was still up in the air. Dillon was pushing Jeff Gordon, Kevin Harvick was pushing Hamlin – all of them hoping they could get past Dale Earnhardt Jr., who went on to win the race. As it’s happened many times in the past, the Big One occurred and chaos ensued. Because the safety devices implemented by NASCAR and Daytona International Speedway performed admirably, Dillon and everyone else walked away.

“It looks like it kept the car in the racetrack, which is good,” Hamlin said, after being released from the infield care center. “I rode in the ambulance with Austin [Dillon] and he said he felt fine. I think everything has gone really well and I think NASCAR has done a great job and this track has done a good job of stepping up. Anytime you get these cars turned around backwards at these speeds there’s going to be lift and we’re going to get these cars in the air, it’s just part of physics. I think everything did its job there.”

In fact, liftoff speed is a complex physics formula that I won’t pretend to understand; however, breaking it down into layman’s terms, a medium-sized jet airplane can achieve liftoff at 150 mph. A racecar usually goes airborne at about 160 mph.

Auto racing is inherently dangerous, and while no fan goes to the track believing they will be injured, there is a possibility it could happen. Obviously, drivers know this before they strap in, but fans also acknowledge it when they buy a ticket to the races. It’s written on the back in black and white. At the end of the day, the only way to not experience some form of danger when racing is for men and women to stop doing it.

Kudos to NASCAR and every single track operator, especially Daytona International Speedway, who have done their best to ensure the proper safety equipment is in place, so fans can experience one of the most exciting forms of motorsports on the planet.

Falls don’t kill you either. It’s the sudden stop. Just like in race cars. That’s why there is the Hans device. There isn’t much protection for the fans if they’re hit by debris.

Don is exactly right. While it is certainly important to keep the car in the bounds of the track, the debris can’t be ignored. That shower of parts and pieces is probably more likely to do damage, and more widespread damage than the car itself.

This problem has existed for quite some time, some pundits say 27 years, but I don’t know that to be true. Admittedly it is a difficult problem to solve, but if it isn’t solved somebody will inevitably be seriously hurt.

But maybe the people with a financial interest are willing to roll the dice. If so I wish them, and their paying customers well.

You don’t need to be a pundit to do basic arithmetic. The plates were put on in 1987. It is now 2015. That is 28 years of failure to find a solution that allows for both competitive racing and safety. If NASCAR’s engineers cannot come up with an engine that will not generate enough HP to launch a car into the grandstand, then just plow under Dega and Daytona and try to forget the memories of horrible evens that have occurred at both places – strictly through NASCAR’s own choice.

Even I can do basic math. However I’m not sure this mess started with the restrictor plates. In fact I think the plates were a reaction to a car getting launched at Tallagega. So when did it start I dont know.

Only a complete fool would give NASCAR any credit for “safety” after Sunday night’s debacle. The fact they didn’t kill anybody proves the product is safe? Is that a joke of some kind? Plate racing has been dangerous and deadly since its inception as a “temporary measure” in 1987. The only safety improvement have been external to the main issue – drivers wear more protective equipment and more (but not all) walls are protected with SAFER barriers.

Absolutely NOTHING has been done to fix the inherent danger of pack racing. It’s only made worse when one chosen team gets equipment that allows 20% more HP, allowing that driver to block at will and cause the disasters that NASCAR so dearly loves. As Ryan Newman said, “NASCAR got what it wanted.” Kudos to that man for having the balls and integrity to call out NASCAR for its blatant disregard for safety in favor of the Big Show.

Take the damn plates off, reduce engine size and prohibit blocking. Then you will see a return to both racing and relatively safe racing instead of the crapshoot we are forced to endure now.

Well you could say the safety measures worked or you could say that NASCAR got lucky that no one was hurt. One thing is for sure. If wrecks like that happened at every race the question wouldn’t be “if” someone would be killed but “when” someone would be killed. You can’t roll those dice and not expect to crap out once in a while. NASCAR got lucky.

So according to Jerry, lets keep risking people’s lives because the catch fence did its job. Instead, blame the drivers. That philosophy is on a whole other level of stupid. Like someone said Nascar got lucky. If Dillons car went into the fence roof or driver door first, we may be talking about a whole different set of circumstances. But apparently things are a-ok because the catch fence did its job.