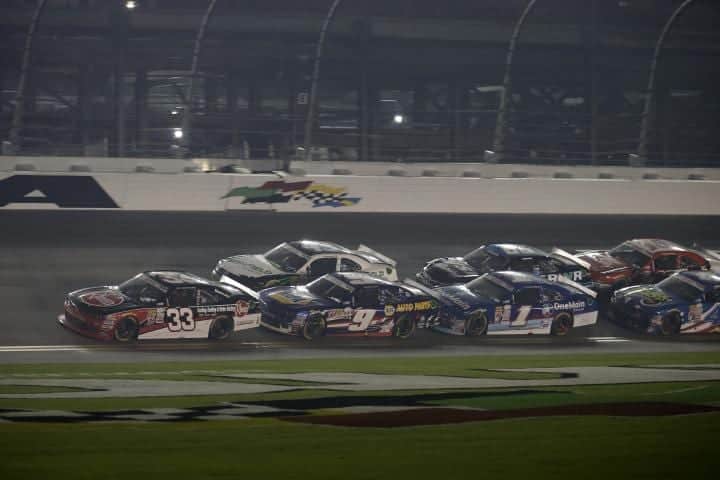 ONE: Wild ride for Dillon

What a wild, wild weekend it was for Austin Dillon, who finished Saturday night in Victory Lane and was lucky just to finish Sunday night in one piece. It truly is a testament to the safety of the cars today that he was able to get out, walk away under his own steam, and wave to the crowd. And it’s not just the cars with the catchfence also doing its job and turning what could have been a catastrophe into just a few minor injuries. We are running 200 mph and pushing each other around out there and it’s just bound to happen,” said Dillon in a Team Chevy release post-race. “No matter how safe we can make the sport, when you are going that amount of speed, things happen.”

And he’s right. You can argue all you want about it but with restrictor-plate racing, this level of danger lurks around every turn. I’ve seen some folks suggesting no green-white-checkered finishes, but I’m not sure that would really change that much. You either race this format or you don’t. And if you do, the risk is always going to be there. Nothing can truly mitigate against that. All told then it was a miraculous finish on Sunday night – one that could have been so much worse. Thank the good Lord above, as Dillon also noted, that it finished like it did.

If one thing is clear with regard to the 2015 package at cookie-cutter tracks, it’s that change is needed and that change is needed pronto. So I’m both intrigued and excited to see what this week’s test sessions and this weekend’s race will bring. Hopefully we will see less of the worst two words in NASCAR – aero push – and more side-by-side racing with passes for the lead.

With such a preponderance of mile-and-a-half venues on the calendar, not to mention five out of ten Chase tracks, one of the biggest issues NASCAR needs to solve is the quality of the racing at these tracks, which to date has been subpar (and that’s being generous). Of the upcoming test at Kentucky and another one just conducted at Darlington, NASCAR Executive Vice President and Chief Racing Development Officer Steve O’Donnell in an NASCAR.com interview noted: “We’ve got a tentative plan that we’re talking to teams about to see which way we can go at some different venues so it’s been a lot of great collaboration,” said O’Donnell. “The fans should know ultimately that we’ve got an industry that really cares and is really working together. Then ultimately we’ve got to make the right decisions that we think will put on the best racing possible.” Let’s hope that’s exactly what happens: Heaven knows, it’s necessary.

Saturday night’s race at Kentucky Speedway marks the official halfway point in the season, with just nine races remaining until the Chase begins. The regular season is now akin to a 25-race prologue, especially once you’ve got your all-important win, before we get to the real meat of Chapter One of the playoffs and the sharp end of the season. And with Daytona now in the history books with, mercifully, all the participants safe and sound, we only have the one real wild-card race left at Watkins Glen in the final nine before the Chase. So the pressure on those looking in from the outside of playoff contention will continue to ratchet up a notch each and every week between now and the conclusion of the regular season at Richmond International Raceway on September 12th.

The halfway point never fails to catch me by surprise. You would think after eight years of writing about the sport, I’d be down with the flow of the season, but each time we reach the turn for home, calendar-wise, I find myself wondering where all the time has gone. So far, then, in 2015, it’s fair to say we’ve not had a great season. It’s not been appalling – there have certainly been some entertaining races and moments. But for the most part, cars in catchfences aside; we’ve not seen a great deal of drama. Here’s hoping the second half of the year is much better than the first.

A three-hour rain delay during prime time on the East Coast was not how NBC Sports would have drawn up their perfect return to NASCAR, but I have to say, overall, I really enjoyed their return to big-time stock car racing. More importantly, they handled the delay and uncertainty with great aplomb. That wasn’t an easy start for a “new” team by any stretch of the imagination. Rick Allen, Steve Letarte and Jeff Burton were great in the booth and with their existing chemistry and a few more races under their belts, they’re only going to get better and better as a team.

Meanwhile Krista Voda, Dale Jarrett and Kyle Petty did the honors in fine style in the studio. I could listen to Jarrett and Petty wax lyrical all day; both are class acts and welcome additions to our NASCAR screens these next twenty weeks. I’ve mentioned before how much I enjoy NBC Sports’ coverage of my other two favorite sports – soccer and IndyCar – and on the evidence so far, I’m not disappointed at all. I’m expecting NBC to keep bringing it throughout the remainder of the regular season and into the Chase.

And finally this week, Ryan Newman certainly called it like he saw it post race on Sunday night (well, Monday morning). In an interview with the USA Today, Newman noted: “”NASCAR got what they wanted. That’s the end of it… cars getting airborne, unsafe drivers, same old stuff. They just don’t listen.” Strong words indeed from the Richard Childress Racing veteran, no doubt with a shade more vehemence in support of his teammate Dillon, but I’d have to say a fine is probably coming his way sometime soon. Still, Newman made his point in no uncertain terms, which was likely his intention all along.

absolutely agree with you, NASCAR will fine Newman for those comments – even though he is absolutely correct in his assessment. NASCAR uses that sort of carnage in their racing promos all the time. Personally I don’t care for RP racing. I’m glad that Dillon didn’t die in that crash, that’s about the best I can say.

I didn’t watch the race so I can’t comment on NBC’s coverage. I was out with friends and got home to find out that the race was going to restart at 11 p.m. eastern. I opted to go get the sleep I needed rather than watch. I’ll be happy if they have a director who knows that wide shots are the right choice.

Testing, testing, 1, 2, 3. NASCAR needs to come up with something worthwhile. They have been doing the same thing over and over again with the same results for the past 10 years.

They say insanity is doing the same thing over and over and expecting a different result. Brian is beyond help.

What will the chase look like after ten years of tweaking (if NA$CAR is still around)?

Of course Newman is right, but society has now become afraid of the truth, so he will get fined. But you can’t blame him. Ever since he went through that stretch several years ago where he flipped almost every plate race, he has been vocal about it ever since.

Nascar is playing russian roulette with peoples lives and I don’t think a thing will be done about it, even with all the outrage right now. Nascar has their highlight reel for Talladega and next years 500. So Nascar will let things die down and move on until it happens again. The only way the drivers are going to get nascars attention is if they hurt Brian France in the pocketbook and decide to collectively boycott these races. Other than that not much will change and we’ll all go through this again until someone gets killed.