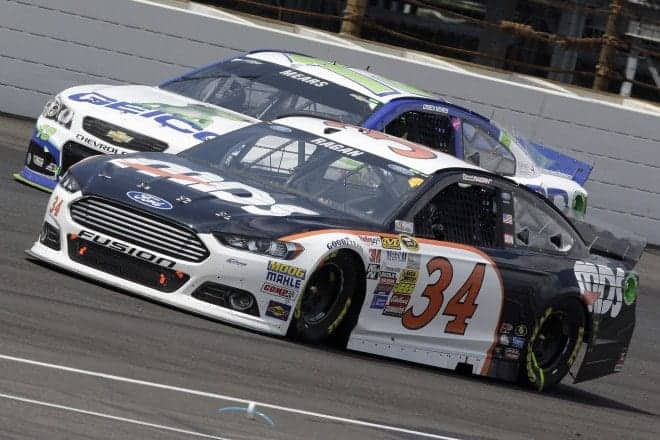 While teams prepare for the new rules package this weekend at Kentucky Speedway, fans learned that it won’t be the only track to see changes.

The Michigan and Indianapolis packages will feature more drag and less downforce. Jeff Gordon posted a blistering track record speed last season at Michigan with an average speed of 206.558 mph. NASCAR expects the speeds to drop around the 191-mph range for the August weekend.

“So when we look at where we could potentially implement a high-drag package and you look at the calendar, certainly Michigan for us stood out as a track where you’ve got two races on the calendar, enabled us to take a look at something, provided everything we needed to implement a high-drag package,” said O’Donnell of the Michigan change. “You had a track who was eager to talk to us about the potential for this, as well, so I think everything lined up in terms of the lead time we needed originally to be able to put a rules package like this in place, and then in talking to the industry, validating that lead time, as well, to be able to do just that.”

The changes at Indianapolis, on the other hand, will be made to encourage passing.

“When you look at a lot of the data, and obviously you see it play out on the racetrack, but the belief is that the second-place car, if they’re lined up maybe two, three, four, five, could have a five-mph difference between the leader.,” said O’Donnell on rule changes for Indianapolis. “As an example, if you came out of turn 2 and you had a four-car-length lead, it’s the belief that second and third, if they hooked up, could head into turn 3 up on the bumper of the leader and potentially have kind of that – more that slingshot that you used to see and the ability to pass. A lot of that we’ve got to see in the real world once we’re out there at Indy, but that’s the effect we believe it’ll have.”

NASCAR will add test sessions that will be built right into the race weekend schedule for races with rule-package changes. NASCAR has added extended track time beginning on July 8 at Kentucky that will allow teams time to gain data. They will have a backup plan on Thursday if those sessions are rained out.

Darlington will see a rules package similar to this weekend’s race at Kentucky, while Richmond will use the current setup with a new tire. With Darlington and Richmond being the last two regular season races, O’Donnell took some time to address the through process behind their changes.

“We go back to every race is equally as important going into the Chase, and if we as an industry believe we’ve hit on something that we think can improve the racing, we’re going to do that,” said O’Donnell. “We’ve got the smartest folks in the world working on the racecars and the best drivers in the world, so through those conversations, everybody lines up and says, yeah, we can do this, and obviously you’ve got to have enough lead time to do it, but we did in these cases and felt like we could pull it off, and again, put the best events on possible for those races.”

As for Chase races, O’Donnell confirmed that no changes were planned at this time, but didn’t rule out the possibility of future changes.

“I think all options for us are still on the table,” said O’Donnell. “Obviously we want to see what happens at each of these events.  Currently these are just race-specific rules that we’re looking at, but no final decisions have been made on that.

“If this isn’t something that we feel collectively as an industry we can do, we’re not going to do that. Let’s not forget that the rules package we currently have in place is working on a number of fronts, and we’re happy with that. We’ve seen a number of different winners. It would have to be something that we all felt we have enough lead time, we could implement and it was the right thing to do across the board for the sport, and if that was the case, we’d go ahead, and I’d say in that case, it would have to be something that we believe made sense for 2016 for those venues, as well, so we wouldn’t kind of change something for the Chase and then change it again for those venues for ’16. That’s kind of the conversations that are ongoing now with the race teams.”

O’Donnell also took the time to address questions related to Austin Dillon‘s crash at the end of the Coke Zero 400, as well as potential rules change for the upcoming restrictor plate race at Talladega Superspeedway.

“I think we will have ongoing dialogue with the industry. That’s already started,” said O’Donnell. “It really started at 5:00 in the morning post-race, and we’ll continue that. Anything that we can do to continue to make the racing as safe as possible and have the fans in as safe an environment as possible, we will do that heading into Talladega.”

The first peak at one of the announced rules packages can be seen tomorrow at Kentucky Speedway, when the field heads on track for two two-hour test sessions from 3-5 p.m. and 6-8 p.m. ET.

NASCAR has turned into a drag

If the rules change arbitrarily from time to time are they even rules? What a mess.

Correct……I am sure at one point the “one race championship race” will not consist of a full race…a couple of name pulled out the hat at random..Brian will have them play musical chairs in the infield..the one in the last chair is the “Champion” of the whole season..Kinda like Harvick last year…I don’t give a good damn what anybody did 35 races good or bad, no way is the last man standing for one race, the best of the season. No freaking way. Chump Champ.

Possibly well thought out rather than reactive rules that did not seem to change hourly would satisfy the fan base.