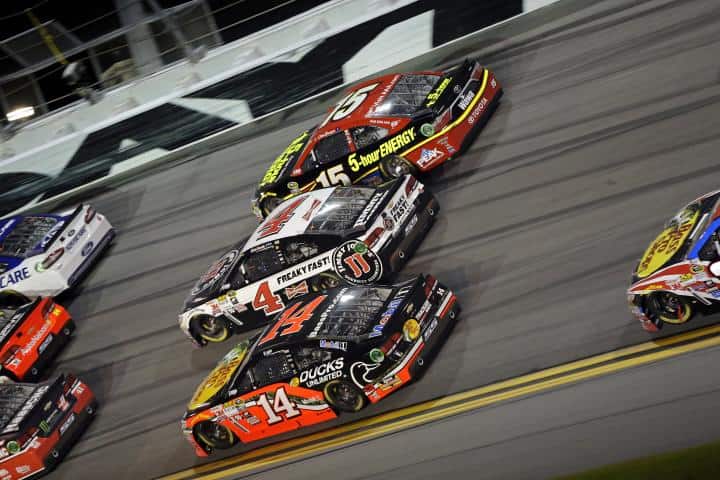 If your July 4th weekend didn’t involve at least two of these things: hot dogs, fireworks or racing at Daytona, then you missed some of the best things our country and the sport we love offer. The fireworks in the towns and cities across this great nation of ours were spectacular, but the racing this weekend was arguably some of the best restrictor-plate racing we’ve seen in some time.

Dale Earnhardt Jr.’s dominance over the weekend, from the pole to Victory Lane, was a huge bump in confidence for the driver who is currently second in the points standings going into the last nine races before the Chase. And the win reassured that he and first-year crew chief Greg Ives can have real success together.

At Daytona, miracles sometimes take shape in the most unexpected form. The 1998 victory of Dale Earnhardt in the 500, or even most recently Aric Almirola bringing the famed Petty 43 car back to Victory Lane at the 2.5-mile superspeedway, are just two example of how Daytona has worked miracles over the years.

On Sunday (actually Monday morning) at 2:41 a.m., yet another miracle took place at Daytona, this one, much greater than wins and losses, coming in the form of bringing safety to one driver and fans, as a horrific wreck took place at the checkers as the field came through the tri-oval. The fact that Austin Dillon was OK, got out of his badly tore-up Chevy SS and walked away is simple a miracle. The car, the safety equipment and the catchfence did their jobs and prevented what could have easily been a tragedy.

As fans of motorsports, times like these remind us that it’s important to remember that it’s the people who really matter. It’s more than winning and losing, pit stop speed and track bar adjustments. The tremendous power that these cars produce, and the wrecks that sometimes can and will happen, are ideas that fans and drivers alike should not take lightly. These are machines; powerful machines, with no feelings, no compassion and no mercy. One wrong turn of the wheel, slight tap of the brake and the possibility of getting turned into the wall, or going airborne as in Dillon’s case, is always there.

What NASCAR will do to correct or change any of that for the better is yet to be seen, but you can almost be assured some sort of change is forthcoming

And with that, let’s dive into this week’s mailbox questions from you, our readers…

Q: Hey Greg, No one has said much about this, but do you think there is any connection between the late, late start to the race (seeing as it finished up almost at 3 a.m.) and the wrecks- Carl Edwards‘s spin, and massive wreck involving Dillon on the final lap? Thanks! – Sandy C., Riverside, N.Y.

A: Sandy, thanks for writing in this week. That’s a really good point you make about the time this race was run and the decision that NASCAR made to start the race at 11:30 p.m. following a three-hour rain delay. There are two things to think about here. One, yes it was last into the night, and the question of driver, crew, safety crew, media and track workers comes into mind, especially when the race was slated to be finished up by 11 p.m.

Second, drivers, teams and safety crews had plenty of down time during the rain delay to rest and should have been ready to go when called on. NASCAR is, after all, an outdoor professional sport and remains at the mercy of inclement weather, especially in Florida during the July race.

NASCAR, citing the lack of a curfew for racing at Daytona and getting the teams back to their shops on Monday to prep for an early load and arrival at Kentucky Speedway, did everything in its power to run the race on Sunday.

Did the late start to the race exacerbate some of the reasons wrecks happen in racing at this level, at these speeds, in plate racing and in particular at this track? No. These are professionals, and while it was a late start and a later ending, I think most of these guys were ready to race and wanted to get the event in on Sunday and not have to come back Monday morning.

I’m sure though, just as I said in the intro, among the things NASCAR and the R&D department’s safety team will evaluate on the huge wreck with Dillon, will be the starting time of the race and possible driver fatigue.

Q: Greg, was always kind of wondering this. The Air Titan made a huge impact as far as saving NASCAR time at Daytona this weekend drying the track. How do they get the fleet of trucks with their drying equipment from track to track? And does the Air Titan visit all the tracks? – Hector V., Chandler, Ariz.

A:  Hector, thanks for this question. It’s a great one given the hours of exposure fans had to the fleet of NASCAR’s most advanced track drying system. The fleet of custom Toyota Tundra trucks that are equipped with the Air Titan track drying apparatus are actually trucked to each Sprint Cup Series event via a car carrier truck, similar to the ones you see on the highway carrying new cars on their way to the dealership. NASCAR contracts with the racing logistics company Champion in order to accomplish this feat every weekend.

In addition to hauling Air Titan fleet, Champion also hauls tires and wheels for all three NASCAR national touring series as well as other equipment needed at each track by teams and the sanctioning body.

That is in addition to the teams’ individual haulers carrying their cars and competition equipment, and NASCAR’s own fleet of trucks. It just goes to illustrate what a massive logistics undertaking this sport is each and every week from track to track.

Please don’t make it seem like Junior fought for the pole, he did not. Strange how NASCAR crammed all those events into one day and poof the weather (who knew…sarcasm) played as a gift into Juniors hands as well as some others who usually don’t qualify great. By manmade design or mother nature…we will never know. I am guessing looking at those practice speeds and NBC’s debut for 2015 it wasn’t hard to figure out..blaming mother nature was the name of the game..and then it went downhill from there…SMH.

At least NBC didn’t make it out to be some tear jerking heartwarming victory for Jr like most of his other wins typically are. But then again FOX and DW love their “Junebug” so its typical of them to overdue everything Jr. Frankly it gets tiresome with his stories of overcoming everything since his fathers death and how every win is somehow inspirational, when in fact he has been in top equipment his whole career and still doesn’t have a championship. That’s underachieving not inspirational.

As usual kb’s complaint line(hater always remarks) if his driver doesn’t win…Great Job NBC for the first one & with rain delay consideration ..Some very minor errors on Allens part but these will be overcome (also caught Sat Infinity & they were fine) So refreshing as compared to the Waltrip constant MWR or Toyota ad(no issue w/Toyota just don’t think there any credibility when its a team owner or his brother schilling for him)
which has no place in a broadcast… Think Nascars choice of Sun(NBC I believe has some blame here) vs Sat was insane for the time of day & year & it would seem they don’t know which days off the fans were getting (am sure many fans had flight issues)…Great that generally everyones ok but still think they are going to have a hurt eventually…Nascar has done an great job of keeping the cars down but the drivers have shown they can still find a way..Have a Great Day All

Earner, please earn some brains. I was talking about a “EARNED” pole. He didn’t earn the pole, so shutup with your lame ass rant, don’t like what I post don’t read.